More on the Paris Metro by Anthony R. '09

Our final review was Monday - officials from the Paris public transport authority flew in to see us present a semester's worth of research. Here's a window (part 1 of 2) into our work on rethinking Paris' subway system this term. Details of our final ideas come later! (Lots of pictures within.) 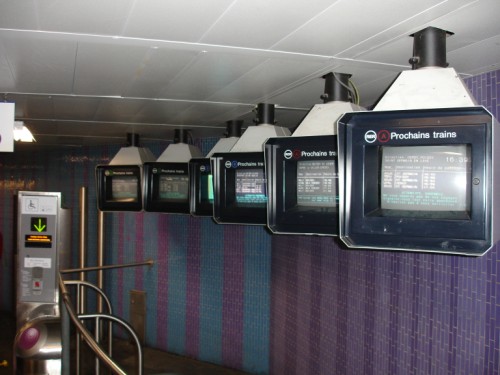 The term’s almost over! While I’m excited for the summer, with a continuation of my January internship at the BNSF Railway in Texas, I’ll also be missing some of the great experiences I’ve enjoyed this semester. I’ll tell you about one of them here.

For the past four months, I’ve been working with the MIT Design Lab to propose improvements to and new ideas for the metropolitan Paris subway system. (I introduced this to you sometime in February.) Our effort is directly sponsored by RATP, Paris’ public transit authority, and we met at their corporate offices over Spring Break to present research we had done so far. Technically it’s a grad class, and yeah the class is about half master’s, half PhD students (and then me), but age doesn’t matter so much in these things. 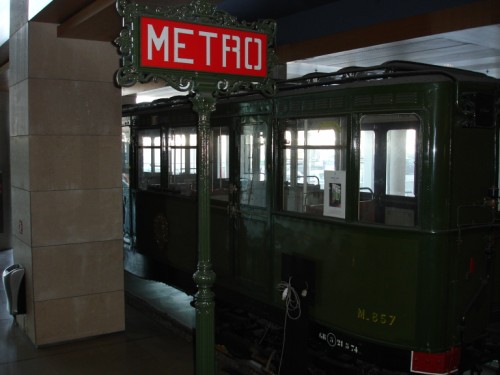 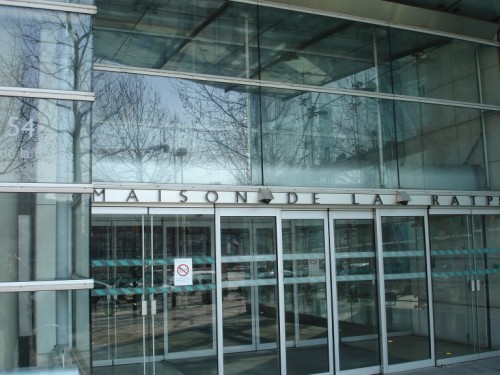 For the first three weeks or so, we developed ideas independently… we urban planners, architects, designers, and MBA students, that is! As you can imagine, we all came up with wildly different stuff, though very interesting in all of its own ways. The workshop began very open-ended: our weekly assignments were literally things like “think about the Paris subway system, do a little research, and come up with some ideas about useful improvements” and “now that you’ve learned some more about [x], extend your ideas to reflect that new insight.” It was really refreshing to just sit back and see what everyone brought to class, and how they were inspired by your previous thoughts, or vice versa. One bright concept could change the direction of the entire term!

The professor and instructors took our ideas and split them into four big groups — cultural, commercial, learning, and social connection — and assigned three to four people from the class to work on each of these four project areas. I had suggested education as a possible use of subway station and train space, so not surprisingly, I was assigned to the learning group. :)

Each group then met with Marco Susani, a design director at Motorola whose team developed the RAZR phone. He had some good initial insight about what it means to “be mobile,” in the sense of exchange of information in a mobile environment like the Metro. The next week, Madame Furstenberg, my French teacher from last semester, came to the class with the director of the MIT-France program to give a crash course on Parisian culture. She pointed out a neat site called Objectif Respect, which RATP created to promote more friendly interactions on Paris buses and subways. :-P (I hadn’t seen it, and it’s worth a click — check out the “Top 10”!) And then in true French style, a wine and cheese reception followed.

We arrived in Paris on a Saturday, and our first assignment was to perform an “ethnography” of the subway during the weekend. We toured the various lines and spent a good two days underground examining everything from the advertising on the walls to poorly designed staircases that disrupt crowd flow. Yeah, they paid for our subway fares. 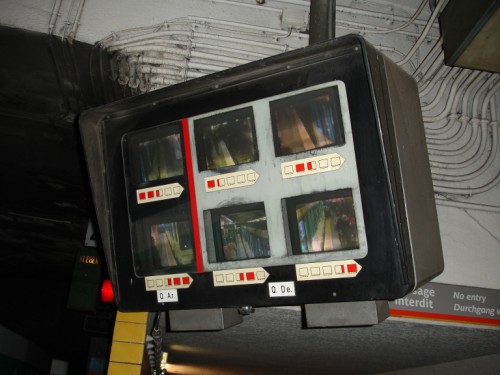 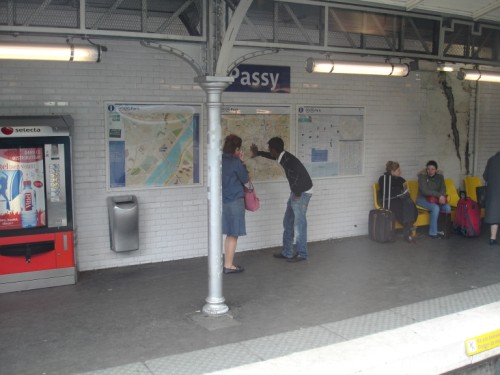 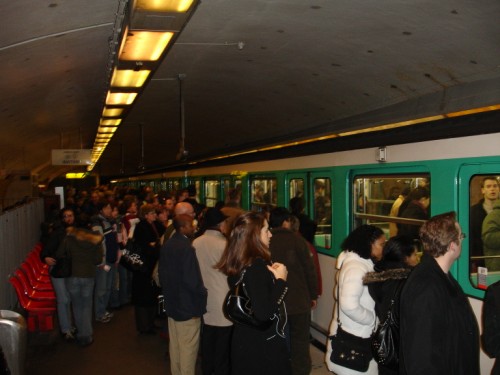 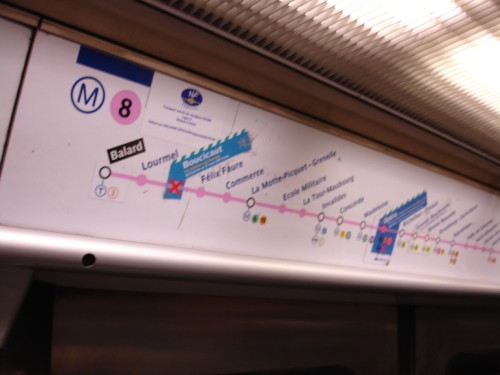 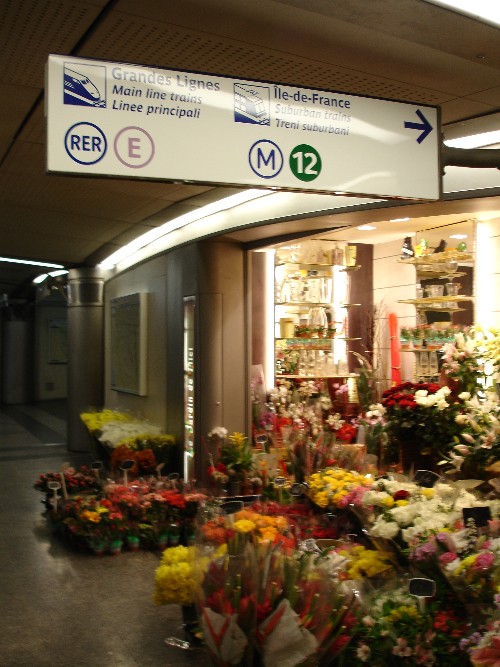 We took thousands of pictures of station entrances, train interiors, chairs, vending machines, posters, placards, people walking, and even overflowing trash cans. We sorted through all of this stuff and picked out the 20 or 30 shots that best represented things we wanted to demonstrate. The hotel wasn’t too happy with our expropriation of the breakfast room as daily workspace … we moved the cups and plates around on the tables to accommodate our laptops, and they made us put them back perfectly as we had found them! 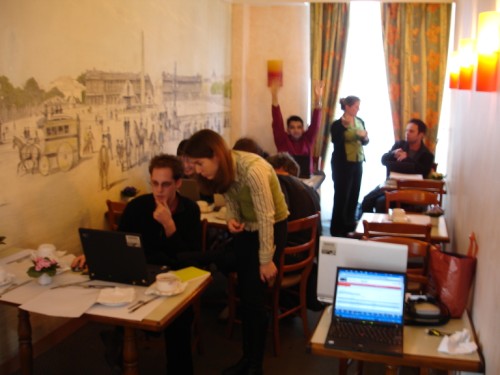 For each photo that we selected, we added a caption that explained the phenomenon of interest. 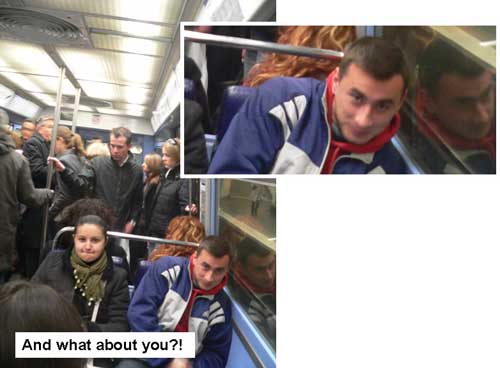 (This was a slide explaining something about social interaction and the indirect means we currently use to express ourselves to strangers on the train.)

These ethnography images formed the basis of further inquiry for the rest of the semester. We also incorporated many of them in our formal presentations to RATP (which I’ll get to shortly). 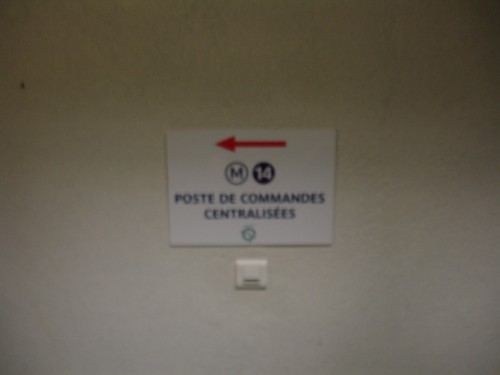 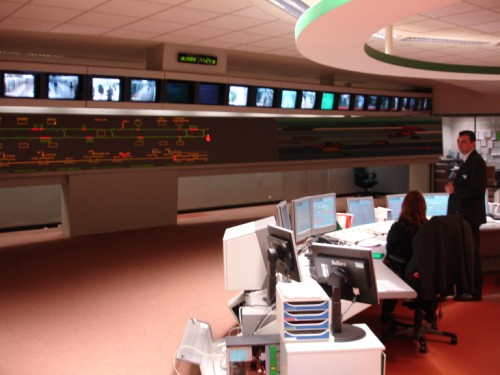 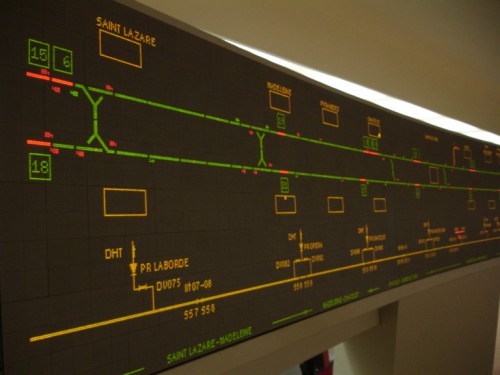 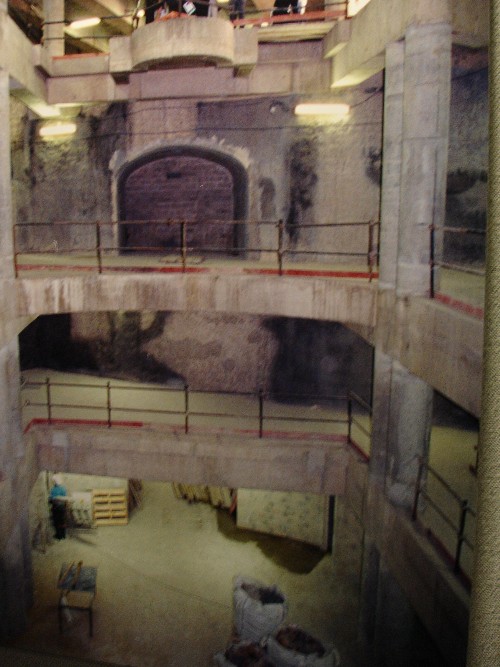 A photo of Madeleine station, under construction

On Monday, we enjoyed a tour of the new driverless Line 14, with a visit to its Bercy operations control center at the end. I’ve visited operations centers for Amtrak, MBTA, and BNSF, and I can pretty much say that they all look pretty similar. :-P Line 14’s was like a mini version, comprising a single room and a few personnel. 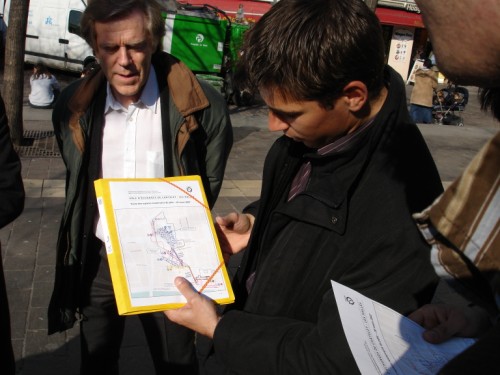 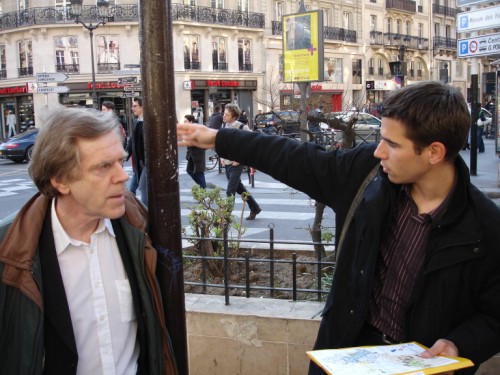 We broke for a few hours and reconvened at 6pm for a tour of Chatelet-Les Halles, the central hub of the Paris subway network. This involved a tour of not only the station itself, but also the surrounding Les Halles shopping complex and outdoor areas. We spent a fair amount of time underground just walking around, taking pictures, and observing the unique crowd behavior that forms at rush hour. 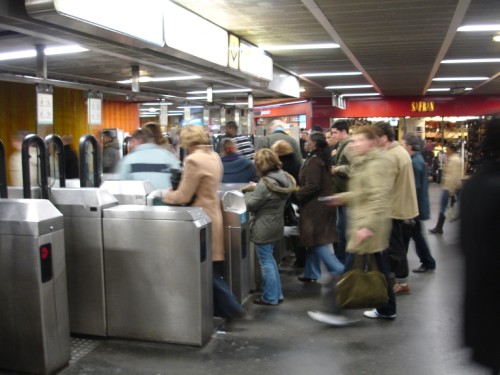 Our midterm presentation to RATP was the next morning, so everyone worked feverishly into the night to incorporate all of the things we had experienced in the preceding days with the research we had done prior to arriving in Paris. Again, we commandeered the hotel breakfast room, though some of us who were still working past 1am were kicked out (!) since the lobby manager was leaving for the night. My group ended up on the stairs! 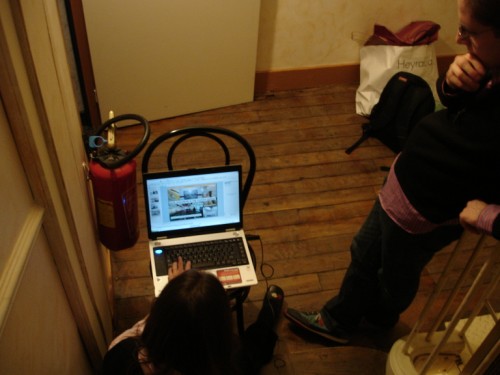 The next day saw us rising early. We didn’t expect so many people to be there — managers of entire subway lines (1 and 14), directors of entire departments, project managers (like one lady who manages all of the information kiosks in the stations), and even a few graduate students who are interning at the agency. We talked about what we had seen, problem areas to consider, and defined a trajectory for our work going forward. Examples include new navigation systems, ways to make existing signage less confusing, methods to teach history and culture to Metro riders, a system like Craigslist’s “missed connections” forum, social “games” to play with other passengers (like scavenger hunts), and more effective business models for transactions of goods/services within the Metro. 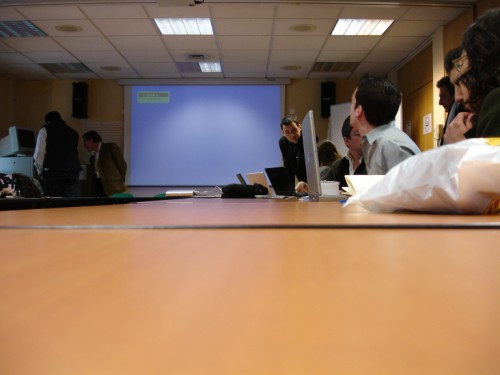 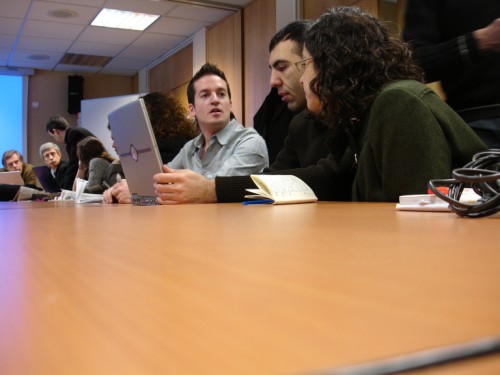 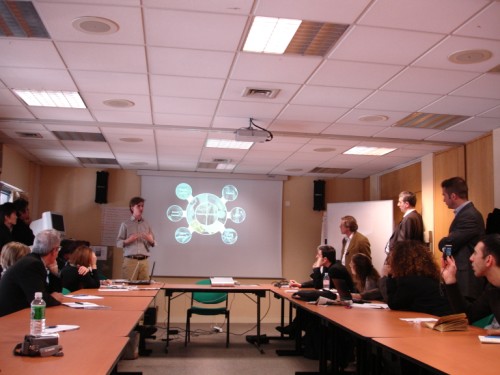 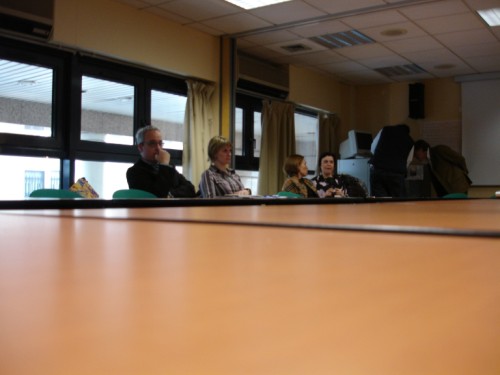 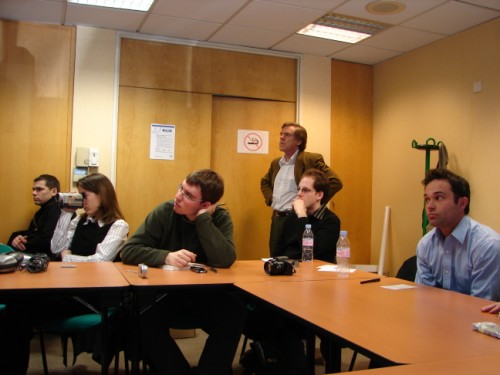 Feedback was given by RATP after each group’s presentation. We were reminded to consider the less technologically savvy customers, and to cater to their needs as well. Additionally, challenges of physical security often limit potential uses of the Metro space. The balance of creativity and security is an especially important one — you’ve got to be able to evacuate tons of people quickly in case of emergency.

Many of our ideas focused on platform and residual spaces, without giving enough thought to the spaces within the trains themselves. Also, many slides talked about events or activities involving lots of people – but while more people means more potential revenue, the higher traffic also results in services becoming harder to deliver. We gathered some great direction for our future work.

After an excellent lunch, we had an “ideation session” in which the personnel split up between our four project groups for some rapid-fire idea generation. This involved large sheets of butcher paper and hundreds of brightly-colored Post-it notes! (I’m not kidding.) 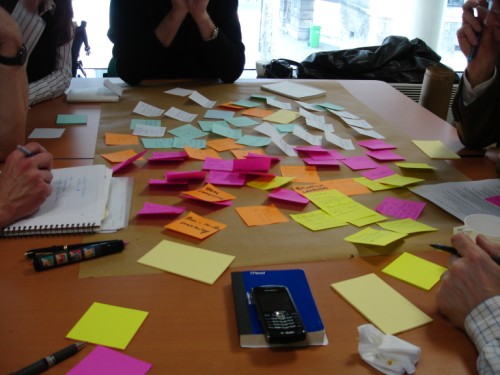 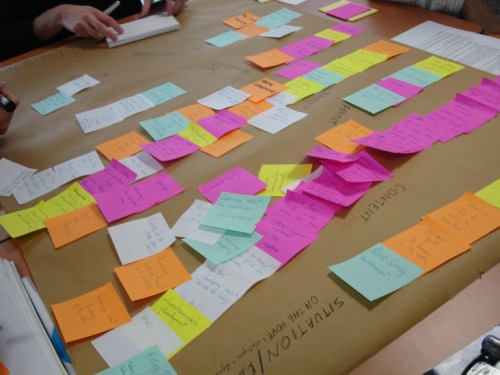 When we came back to Cambridge, we began some serious work on refining our proposals, culminating with this past Monday’s final review. I’ll blog about that soon!

9 responses to “More on the Paris Metro”