Bitter complaining and fond reminiscing. Can't beat that with a stick.

Okay folks, here’s what I have to do this weekend…

1. Write a blog entry
2. Study for 10.213 test Monday
3. Study for a 10.302 test Tuesday
4. Do 10.302 problem set for Monday
5. Do 10.28 problem set for Monday
6. Write introduction to 10.28 advanced technical review for Monday
7. Work 4-hour Burton-Conner desk shift Sunday Night
8. Do German I homework and dictation
9. Marching Band rehearsal
10. Finish Harmony and Counterpoint compositions for Monday
11. Laundry, laundry, laundry
12. Go to New York and Connecticut with Mitra to see Abyssinia, an inspiring musical written by a friend of a friend of Sam’s Mom

Because I am a fool, I also bought the wrong tickets for the Chinatown bus, which we need to have changed mere moments before our departure. That should be stress-free.

The moral of the story is… look for a majorly awesome update Tuesday night or thereabouts. On second thought, what am I going to write about? Taking exams? Anyway, later this week I am heading to the Ig Nobel Awards and to a five-dollar fall retreat at a cabin in New Hampshire with the dorm, both of which have boundless blogging potential.

On weekends like this, I have an old test that I keep in a special place that I take out and read through and remember a time when I used to feel smart: 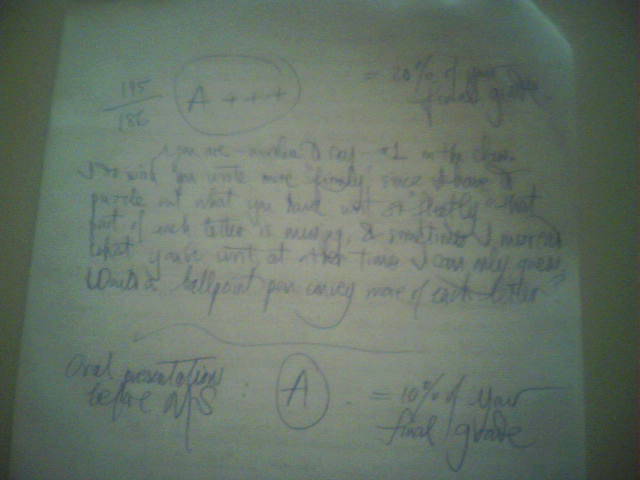 The test is from the Fall 2004 term when I was taking 21M.271: Symphony and Concerto. The test involved listening to various symphonies and concerti and then identifying them and writing down 6 characteristics (key, time signature, texture, instrumentation, etc…). For every excerpt, you got an extra point if you wrote down 7 musical characteristics instead of 6. It seems like not everybody in the class took full advantage of that stipulation, so I made out pretty well. In general, I’ve done fairly well at humanities classes at MIT, but they do end up being a lot of work if you’re not ready for them.

This was also part the greatest week in history; I had four exams, a prelab, and a lab report, and I believe the Red Sox won the ALCS also. This test was on Wednesday and then I had three more on Friday. So, I started off the week with an A+++ in 21M.271 and gradually regressed to a 54/100 in 18.701, Algebra I.

Which was still a B-, of course.