i am starting to feel very old

well here we are again. those of you have been keeping up with the blogs for many years might remember that i’ve been writing love poems to spotify ever since freshman year. shuli and ankita have also done posts in this style. i like to think that i was their inspiration :,)

i’m not gonna lie – i’ve become a little lazy with my spotify game. i think it’s because i’ve started experiencing choice paralysis with what music i want to listen to. i just have so many playlists for like literally everything that i don’t even know what to listen to anymore. i also think that i’ve just been too down in the dumps because of the quarantine to actually listen to anything new.

embarrassingly enough, i have gotten pretty into the lo-fi hip hop beats to study/relax to playlist, and that is usually what i study to nowadays. RIP having good taste in music.

my one attempt to maintain my playlist game is to save ‘monthly’ playlists that i can just quickly save songs that i like to without thinking about whether they fit the *vibe* of the playlist. that way i can curate them into playlists later if i want. this hasn’t happened yet, but it is still my plan :P

here are the playlists i made this year. they are very boring compared to ones from previous years. this is what aging looks like, folks.

before you guys look at my junior year playlist, let’s just look at how enthusiastic freshman year nisha was about making these.

All the songs on it have some specific significance to people I met, adventures I went on, and feelings I felt in first semester. I made the playlist without really thinking through the significance of the songs; I just knew that they were significant to my freshman year in some way. So for this post, I wrote down all the songs and why they mean something to me. It was a very pleasant jog down memory lane and I hope to keep making a playlist for every year that I’m at MIT.

i had so much enthusiasm and so much music to discover :,)

i think that this playlist is a little more on the nose than previous years’ playlists have been. i sort of just add songs when i want to remember a particular moment or experience. as a result, i don’t think there are any really *sad* songs on here. i also just think i’ve stopped listening to music as much, which is sad. i’ll try to get back on that.

i mentioned that i started using last.fm last year at petey’s recommendation (follow me), so i actually have a year of data that i can look back on. it’s interesting because i feel like my top 10 artists haven’t really changed very much over the course of my college life… 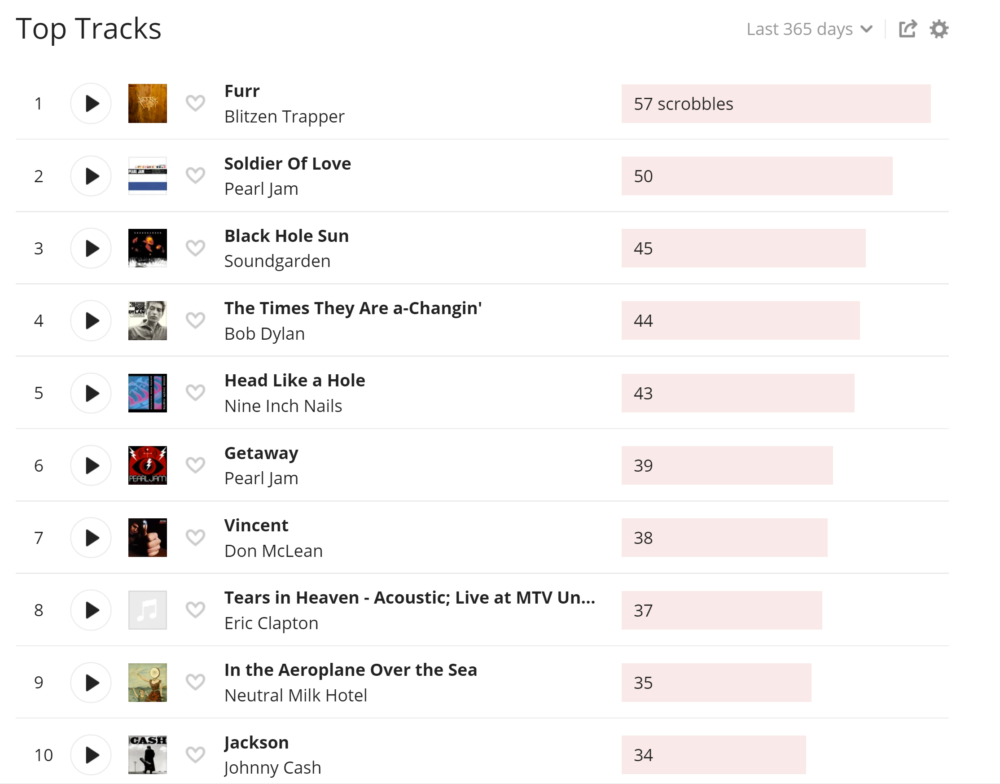 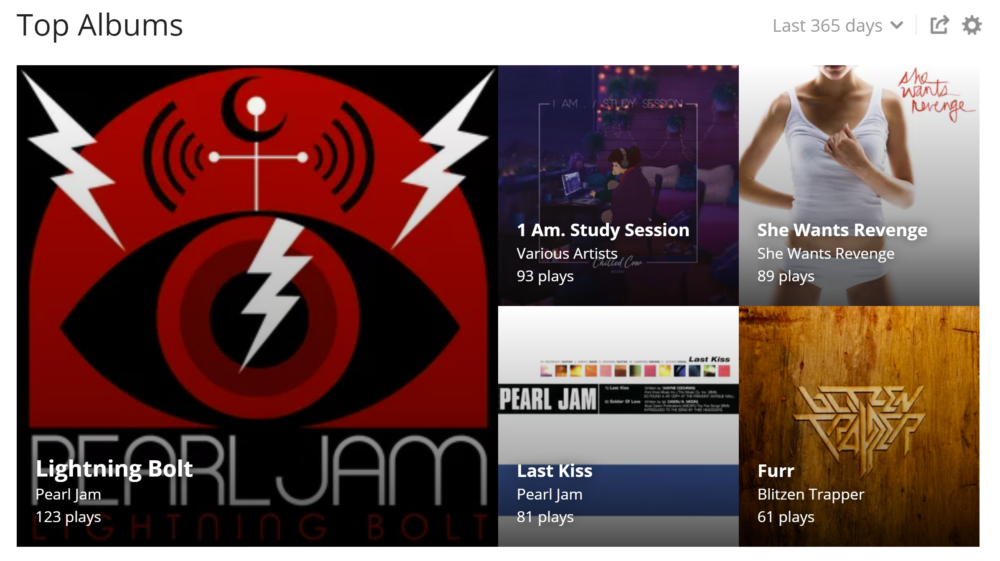 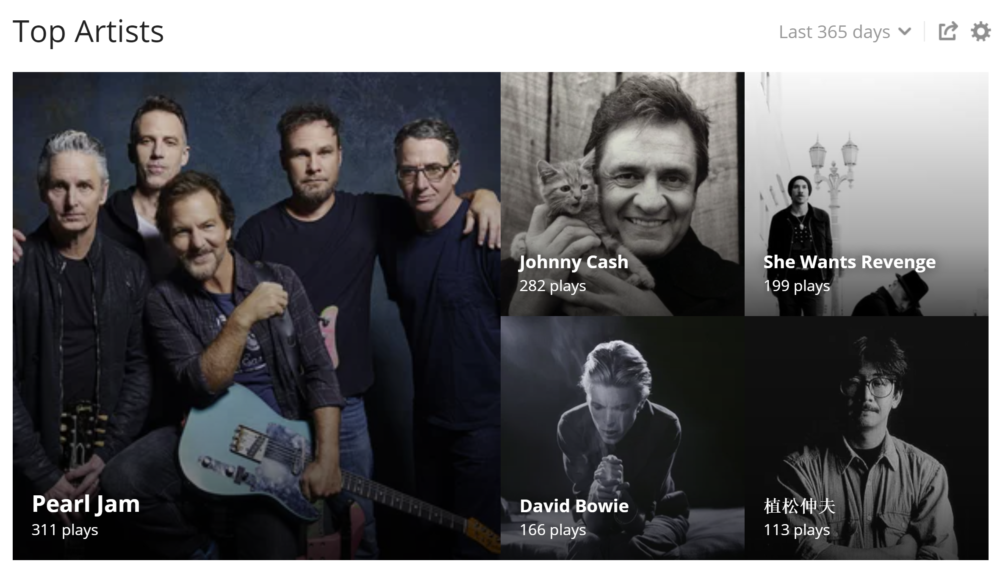 i guess i don’t listen to any women

joon also made this DOPE WEBSITE for a final project. to clarify just how dope i find this, this is literally my ideal final project and i’m jealous that joon got to make it⁠07 granted, i am not a god tier programmer, and joon is lol, so i wouldn't have been able to make this in the first place . here’s a visualization of my junior year playlist on the site. 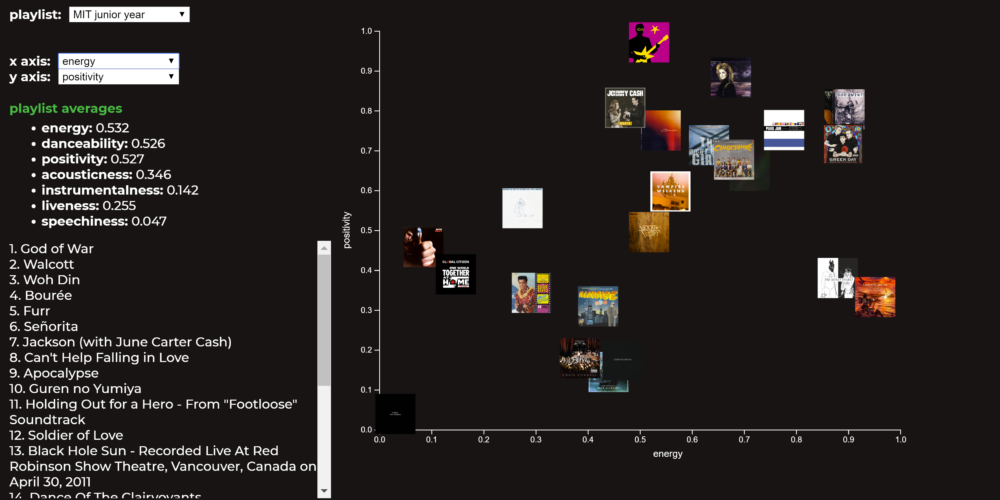 i think that i’ve lost a lot of motivation to discover new music, mostly because i’ve been saving my motivation for getting through each day and working on my projects. i’ve also lost all of the friends that i make music with, and that has probably been the most demotivating thing of all.

next year, i hope for new beginnings, no quarantines, and being surrounded by friends to sing songs with again. hopefully my final version of this post will be filled with amazing memories and not ones from the great quarantine.

if you feel so inclined, help me listen to more uplifting music by adding to this spotify playlist. i would appreciate it <3