It was Day 2 of classes when I got kicked out of one! (Only it wasn't my fault. Really. I swear.)

So this is what an Add/Drop form looks like: 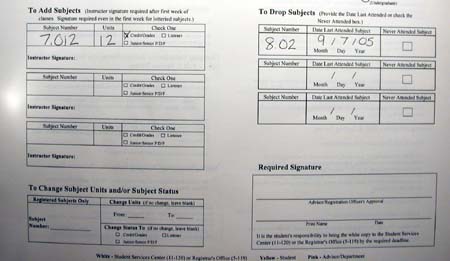 Now, I know what you’re thinking. You’re thinking, “But Laura, even though you haven’t written in this blog in forever, I know you only took that picture on your second day of classes at MIT! What happened? And why are you dropping physics, it’s such a cool class!”

I was enrolled in 8.02, and I was very excited about it. It’s physics! What’s not to be excited about? What’s not exciting is getting an email from the head of the physics department about how 18.01 is a prereq and 18.02 is a co-requsitie for 8.02. Since I tested out of physics but not calc, I wasn’t eligible to take the class in the first place. (Oops. My advisor and I both messed up on that one.) The professor said he was willing to make an exception but that the department usually frowns upon it since people who skip the calc prereqs “usually fail.” So I switched to 7.012 (which isn’t as fun, because it’s not physics). Just a heads up to the 4 other people in the world who test out of calc-based physics but not single-variable calc.

So a funny thing happened while I was on my way to my advisor’s office to get his signature on my Add/Drop Form. I walked into the Lego Lab and immediately someone exclaimed, “Hey! You write a blog, don’t you?” I was quite surprised to hear this from an older-looking student, since it’s mostly freshmen who are into the whole MITblogs thing. So I admitted that I was in fact “the Laura who blogs.” It turns out that my advisor thought it was so cool that I wrote an entire entry about his lab (I mentioned this at the seminar meeting when we were all discussing how cool we thought the room was) that he emailed the link to all of the grad students who work there. So, here’s a shout out to the Lego Lab for being cool enough to work with Legos AND read my blog. Good work.

Speaking of shout outs, I think another one goes out to my family. I gave my mom the link to my blog so she could see some photographic evidence that I am actually doing cool things here at MIT, and she forwarded the link to my grandparents. My grandparents forwarded the link to my Aunt Marion, who commented on my blog with a sufficiently embarassing comment (“this is soooooo cute!”) and proceeded to forward the link to the family Yahoo group, which currently has 36 members. So basically every relative I’ve ever not recognized at a Christmas party now reads this blog. So, hello family!

So before my first class ever at MIT, I decided to enjoy some nice quiet time outside. I was starving, so I decided to eat my breakfast just outside my first classroom, which was in Building 2. The space out there is called Lowell Court, and it’s a small lawn that branches off of the famous Killian Court. While I was sitting there I happened to remember that there is often a lot of disuccion about the appearance of the MIT campus. Some people think it’s hideous, some people think it’s beautiful, and some people find it interestingly ecclectic. All I know is that it was pretty nice sitting on the steps near Lowell Court eating my last breakfast before college. It was so nice that I took a picture, so you could all decide for yourselves about the MIT campus: 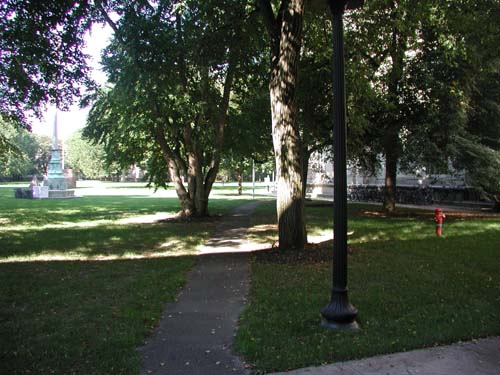 Coming Soon (I promise): Pictures of my room.

Fun Fact: I found out just the other day that I have the same exact birthday as our illustrious Conner 2 floor chair, Sam! How cool is that?

3 responses to “No more physics”