Eaten by a Trogglus Nicoise.

DID YOU KNOW? The last movie Tony Randall appeared in was Down With Love.

This weekend I was troubled with the terrible dream that Bob Barker had died. I realized that here, since most news outlets talk about David Hasselhoff, I am even more insulated from important world events than I am at MIT, and Bob Barker could die and I wouldn’t even know about it for three months! This is like the time Tony Randall died and I didn’t know about it until the Academy Awards Death Montage, and Sam’s Mom made fun of me.

So, in your opinion, what is the most important world news event from the month of June 2006?

This entry is actually about pictures from Nice, but one of the Bahn stations in München is called Freiheit Münchner, and I immediately thought of this title.

The first thing we did in Nice was spend a night in our Pension Grillparzer-esque hostel, which, despite having high ceilings and marble staircases, apparently had not been renovated since the invention of the shower curtain and thereby justified its 20 euro per night price tag. The second thing we did in Nice was go to the modern art museum. Now, if there’s one thing I learned about contemporary art from this museum, it’s that contemporary artists love severed mannequin parts. 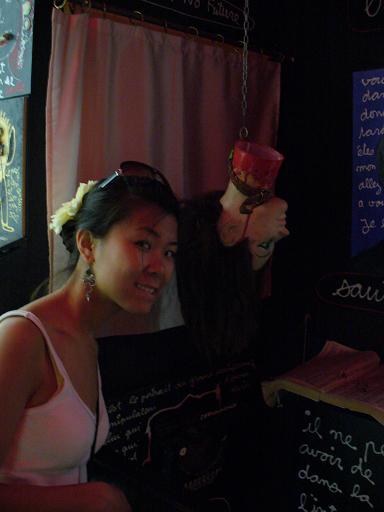 Ling aptly observes this fact. This artist had prepared an entire room full of severed mannequin parts, to symbolize man’s timeless struggle against art, or something. 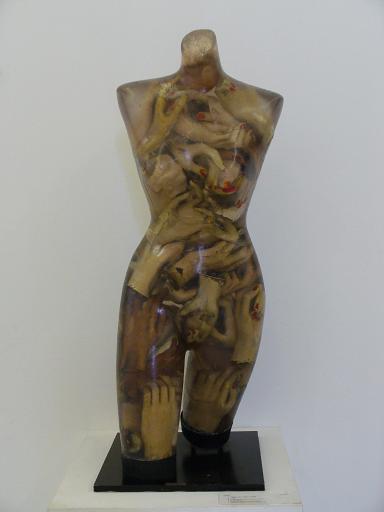 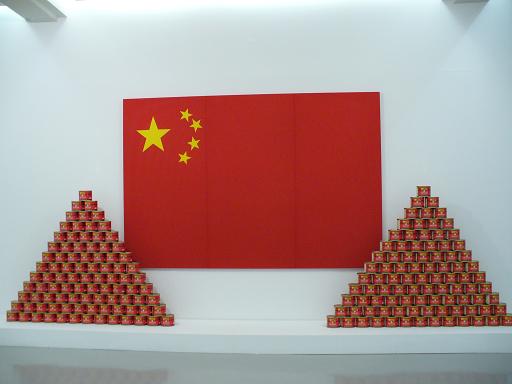 But not all modern art is severed mannequin parts. On the first floor of the museum, we found an exhibition entitled “Les Raynaud de Raynaud,” featuring French artist Raynaud’s favorite works. Well, I think they’re pretty cool, too. In one video, he took a house covered entirely in bathroom tiles and had it destroyed by a crane while he stood inside. Then he took the pieces, and placed them in hundreds of identical bowls lined up in a cathedral, which he filmed, accompanied by Arvo Pärt music. He also made this one, which features pyramids constructed out of cans of squid paste. How many cans of squid paste? I don’t know. Pretend this is Blue’s Clues. 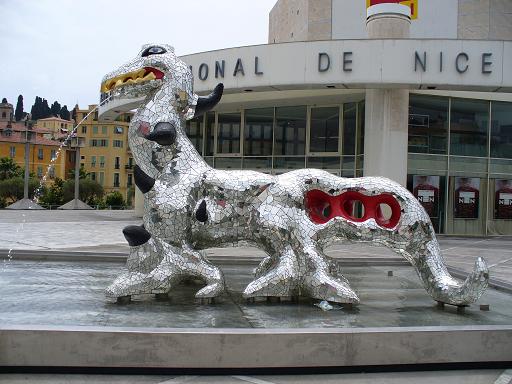 This bizarre dragon thing stands guard outside the museum, deterring visitors from entering. However, it was not quite enough to scare us away, and we eventually made our way to the top of the museum… 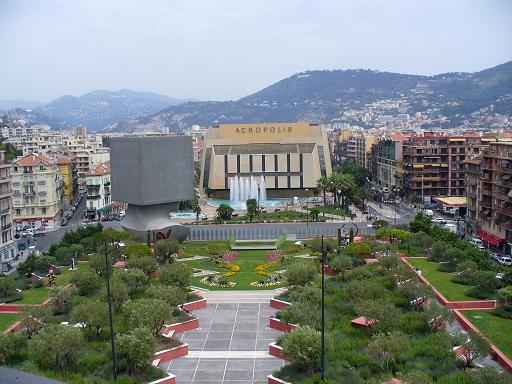 …the view from which is pictured here. Notice the gigantic creepy head encased inside a perfect stone cube. That is supposedly a library. 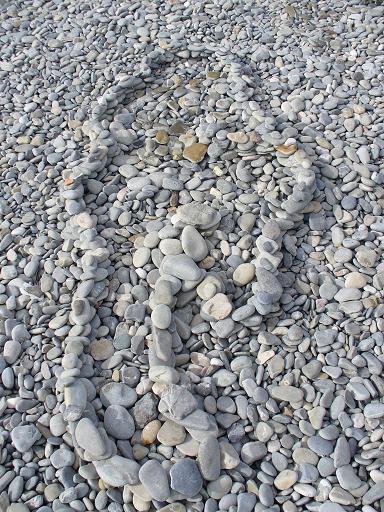 One thing you should know before planning your next family vacation or honeymoon on the French Riviera is that the beaches are all made of rocks, not sand. This has advantages and disadvantages. Advantage: no sand getting all over you, so no need to take a shower after the beach. Disadvantage: everything is rocky, duh. Still, I have no trouble sleeping on rocks (so you can imagine how easy getting to sleep on my unimpeachably soft MIT mattress is) . You can see evidence of this above — while I was sleeping, the “Sam Mauer” was somehow built around me. There is like one person in the world who gets that joke. 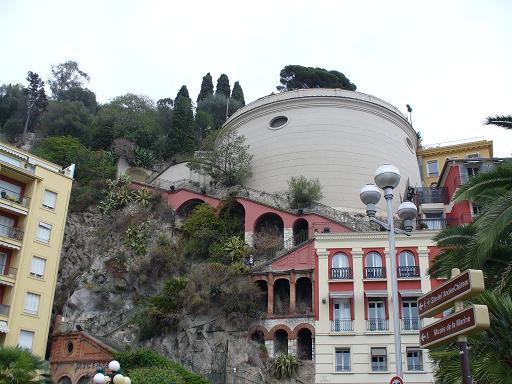 Of course, I was pretty tired, because earlier in the day we had climbed up this scenic hill to see the chateau. As a bonus, we got this lovely view. 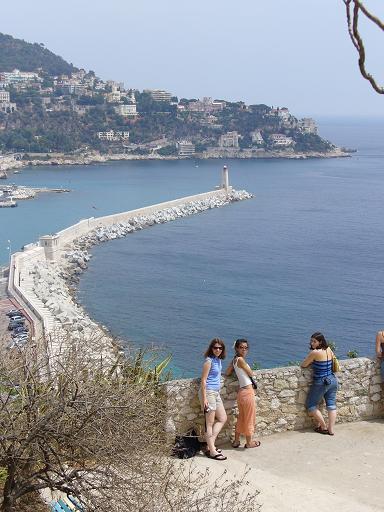 Hey, Northeast coast of America. Water is really blue, sometimes. Vanessa, Stephanie, and Ling ’07 stand beside the beautiful Mediterranean. We also got to play in a jungle gym at the top of the hill, but I was too busy climbing and pretending I was a four-year-old to take any pictures.

Later that day, it was night. 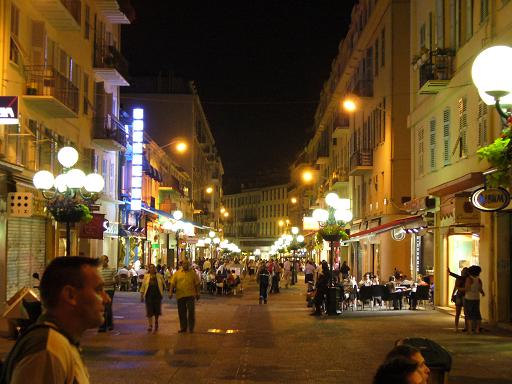 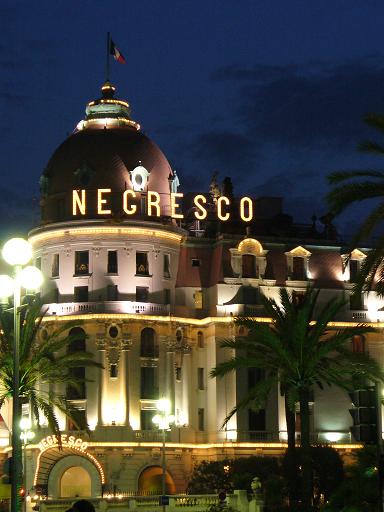 My Frommer’s guide calls nights on the French Riviera “opulent,” and with pictures like these, I’m not one to argue. 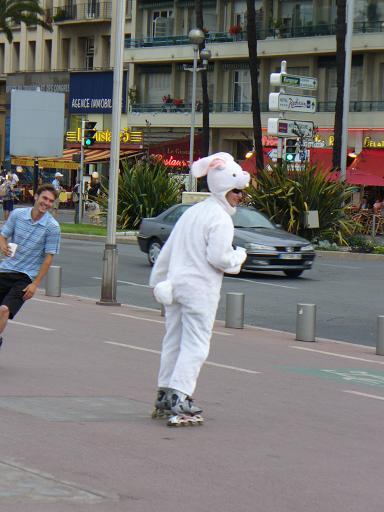 And the fact that we saw a drunk roller-blading rabbit the next day really makes me believe in the concept of synchronicity.