Our mother shoulda just named you Laika! by Jess K. '10

Come on Alex, you can do it.

Here is something that always makes me laugh: 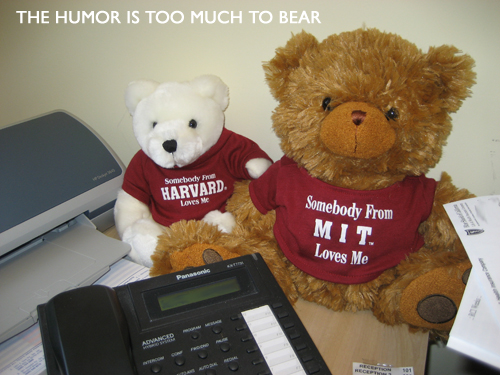 My sister (a Harvard student) and I actually bought these on separate occasions, and I think I had intended to give mine to another relative but forgot to, and so they sit together on my mom’s desk at work. Obviously it proves that her youngest daughter’s love > her oldest daughter’s love, but we don’t really like to talk about it.

(I am, of course, kidding. My sister and I love my parents equally, despite appearances, i.e. that one time my sister wrote my mom a poem for Mother’s Day and I only made a phone call. She definitely won that day – er, I meant to say that you, too, will soon be able to buy embarassingly large-sized teddy bears for your parents that make comical statements. Aren’t you thrilled?)

I had actually planned on deleting this dud of a post because I had left it unpublished for a month with nothing to write about, but then Sam wrote me an angry email demanding I finish this post in which he addressed me as “kamber”, and I knew that I had to finish it. It’s like when your mom calls you by your first, middle, and last name, except my mom never does that (she just makes kind of a harsh coughing noise) and “kamber” is really just a weird nickname my friends made up. It’s also apparently a term having to do with Course 16, although I think that’s spelled “camber”.

Can you tell I’m trying to put off getting to the point of this entry?

Anyway, some time before finals I went to see The Arcade Fire perform at the Orpheum in Boston, which was one of the most life-changing experiences I’ve ever been through, for reals. Maybe it was because the Orpheum has arranged seating and as such I was stuck next to a man with the least accurate sense of rhythm EVER (and as such, insisted upon clapping to every song and never quite recognized when to stop), or maybe it was because they played one of my (and apparently, Spam‘s) favorite songs, Neighborhood #2 (Laika). I had to look up Laika on Wikipedia because I wasn’t even a fetus in 1957, when Laika the Russian space dog was sent up into space as the first living thing to go into orbit, away from all of Laika’s friends and family to learn new things and see new places.

(It would probably be appropriate if I was listening to the song right now, but I’m actually bouncing along to Muse and freaking out the guy on the computer next to me – he keeps looking over at me, as if me tapping my toes indicates that I’m going to drool all over him any second now.)(I’m at the Apple Store. They probably didn’t intend all this free wifi to be used by someone who’s already a Mac user to blog, while listening to her already-purchased iPod, but I mean, the guy on my right is using MySpace, and I’m pretty sure MySpace users* are lower than bloggers on the ladder of internet scum, so, whatever.)

My point is that soon, you’ll be going off into the world, much like Laika the Russian space dog. HOW EXCITING! There are a lot of things you need to do before you’re prepared to take off (see the analogy between you and the space dog?? TAKE OFF??). The thing is, though, no matter how you vow to reinvent yourself, you will still be yourself at the end of the day. If you’ve never taken physics before, you will have a difficult time with 8.01. You might fail a class when you’ve never gotten below an A or a B in your life. And though I know nothing I can say will convince you of it, that’s fine – it happens at MIT. That’s why we have all those upperclassmen who struggled through those same classes – you just need to ask for help. That’s why we have pass/no record.

The space dog analogy continues to apply elsewhere as well. Once you leave home, no matter how many times your mom yells at you to pick up your clothes, you’ll still probably pile up everything you’ve worn for the past week at the foot of your bed, especially when you have tough weeks. Even if your mom calls you to yell at you over the phone! Even if you tell yourself you’ll eat healthy and exercise, if you don’t do it on your own now, you probably won’t in college. You’ll probably get lazy and gain some weight. Or you might forget to eat, just like you forget to cut your toenails. When you leave home, a lot of things change, and some things you want to be second nature don’t fully come together. It happens.

Another reason why I decided to give up on this post is because I knew these words of advice would have no weight on you now. I know for a fact if I had read this a year ago, I would’ve gone “WHATEVER, FUTURE ME. I AM TOTALLY GOING TO TELL EVERYONE THAT I’M A CHAMPION UNICYCLER, AND I’LL PROBABLY HAVE REALLY GOOD EATING HABITS AND BE EVERYBODY’S FRIEND. I’M DEFINITELY STARTING A BAND, AND I’LL GET A’S IN EVERYTHING, FA SHO.” But then I got there, and there were actually real champion unicyclers who played rhythm guitar like something crazy. And I forgot to wash my sheets sometimes, and occasionally I went to sleep with the window open and my hair wet and I froze to the pillow. Future Me who is actually Current Me is okay with this.

Basically, run wild with your dreams. But not like, overnight wild. You’re still you, at the end of the day. You still have weaknesses, even if they’re small potatoes like cleaning up after yourself, or remembering to sleep, or kryptonite. And the people you meet who won the National Geography Bee and have already been first author on a paper in a major science publication? They have weaknesses too. Regardless of where you come from, though, there’s a lot college has to teach you – calculus lessons, life lessons, or otherwise – and the best thing you can do is to let it.

(Do you kinda see why I didn’t really want to finish this post? I’m embarassed. I not only admitted to forgetting to wash my sheets, I also wrote something mostly unrelated – considering Laika died in orbit due to overheating – to a great song. I tried anyway, though.)

You can, however, take this completely unrelated and yet totally AMAZING new skill with you off to college, and maybe all the time you’ve saved from tying your shoes in a flash will leave you more time to remember basic stuff like personal hygiene.

*(I was actually talking about MySpace at work the other day, and I was like, “Who uses MYSPACE anymore??” and Tim of Two Cubicles Down was like, “Uh… I do,” and then rode away on his scooter, because that is what we do at Pixar.)

18 responses to “Our mother shoulda just named you Laika!”