Pageant and pomp and parade by Sam M. '07

The whippoorwill of freedom zapped me right between the eyes.

It looks like I’ve already been outdone with this entry; I must say that Bryan’s two entries on Independence Day weekend are both fantastic, and he was able to get a really great vantage point to take photos the festivities. Definitely check those pages out for some awesome pyrotechnic photos, plus Bryan SOAKING WET!

One thing Bryan didn’t do in his busy weekend was go down to the Hatch Shell on July 4th to see the Boston Pops’s (right?) annual concert. Yes, he claims that the July 3rd dress rehearsal he saw was exactly the same… but I’d be willing to bet that there’s one thing at the actual concert that’s not at the dress rehearsal: four fighter planes flying over at the end of “The Star-Spangled Banner!” 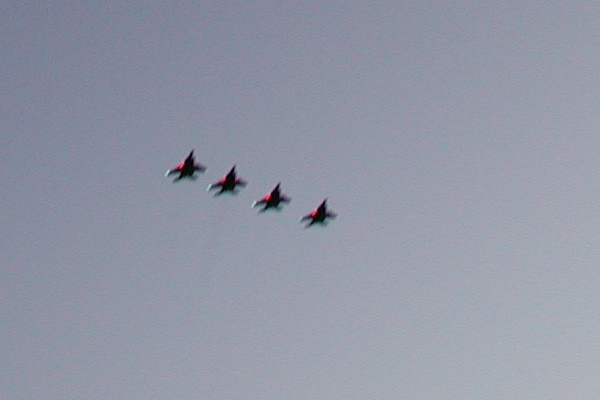 And I was there, taking this awesome picture!

It’s all downhill from here, folks. But read on; if you finish the whole entry Marilee Jones will send you a puppy.

I awoke from uneasy dreams on the morning of July 4th at 5 AM after about 4 hours sleep. Megan (’08) and I had been making plans to head down to the Hatch Shell and pick up tickets for the concert that night. I was actually almost asleep when I recieved a mysterious phone call at around 1 AM (which is only 10 PM in Northern California) informing me that a reclusive-cousin-of-a-friend-of-a-friend used to be a writer for Xena: Warrior Princess and that he could maybe get me that Bruce Campbell autograph I’ve been lamenting over for the past few weeks. Fantastic. Anyway, I ate some day-old Jiffy cornbread (strange craving the night before) and gave Megan a call at around 5:15 AM.

Much of what Megan says needs to be censored for language, so I’ll just paraphrase and say that she wasn’t entirely in favor of heading down to the Hatch Shell this morning–the journey was somewhat treacherous, the dawn ominously purple, and, according to her sources at the Hatch Shell, the line already quite long considering that they start handing out free tickets at 7 AM. So, after a dialogue lasting 2 minutes and 12 seconds, we decided that the best measure would be to get some sleep and just watch the fireworks from tEp, a “fraternity” whose website I feel somewhat hesitant about linking to.

That afternoon Ruth and I went to The Wrap because there’s a 10% off coupon in the Collegiate Coupon Book, which you can pick up for free at The Coop. So, between us we have like 37 copies, of course. This book also lets you get 24 cent kiddie cones from J. P. Licks and huge $5 lunches from Bertucci’s (infinite salad and homemade rolls). Anyways, long story short, the clerk got Ruth’s order mixed up with mine and instead of getting a nutella and a banana milkshake we got two bananutella milkshakes, a delicacy which costs the same and comes highly recommended by both Ruth and me, two of the top five culinary critics in the Boston metropolitan area.

So, I got to tEp and met Megan, who revealed that she suddenly had two spare tickets to the Pops concert that night and that we had to leave right away or we’d miss the concert. Well, after two years of MIT it’s actually psychologically impossible for me to turn down something that’s free, so we headed out the door of tEp literally seconds after crossing the threshhold.

How did we get these tickets? Arup ’08 is awesome, and had been reserving a spot on the Esplanade right in front of the fireworks barge since 1 AM. Having nothing better to do, he decided to go down and get as many free tickets as possible for anybody interested in coming. Truly, his breast is full of the milk of human kindness.

Unfortunately, this was the best picture I took of him: 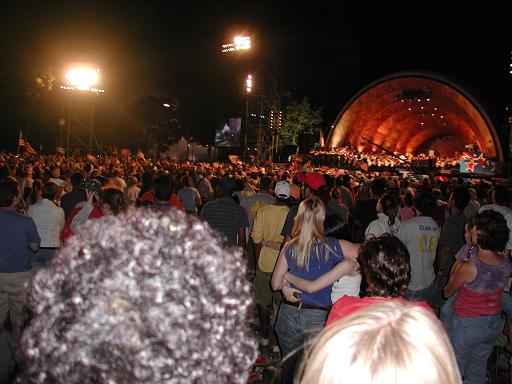 The curly thing in the foreground is Arup’s hair and a little bit above him you can see smoke from the cannons they were firing off at the end of the 1812 Overture.

The concert was uniformly spectacular, even if it did include some pieces of questionable patriotism (the “Star Wars” theme? the “Rocky” theme? the overture from “Chicago?”). Of course, I didn’t mind “When You’re Good To Mama,” also from “Chicago,” sung by Frances Botelho-Hoeg, winner of the 2005 POPSearch competition.

I understand that POPSearch is pretty much the same format as American Idol, except there’s no Paula Abdul (what’s the point, then?) and you only have to sing one song in all the rounds of competition, since that’s all you sing with the Pops. If so, I think this may be my chance–I think I can do an above-average rendition of “Somebody to Love” by Queen, and it’s a song that you could adapt for orchestra easily enough, although it’s not on my copy of Queen’s Greatest Hits as played by the Royal Philharmonic Orchestra. Either that or “The Great Curve” by The Talking Heads.

Yesterday I discovered that Paula Abdul is briefly and somewhat arbitrarily featured in the video for Outkast’s “Roses,” and that just about made my week.

I guess that’s what she was doing instead of judging POPSearch.

After watching the fireworks punctuating the end of the 1812 Overture, Megan and I ran back to tEp and got there with about 10 minutes to spare before the real show began. When I got there, the brothers had already set up a radio (the 23-minute show is synchronized with music) and the Pops were now playing “Proud Mary” and “YMCA”–well, CCR are kind of rooted in American folk rock, I guess, and the latter seems appropriate for Massachusetts.

Though I had seen it last year from the perfect spot on Memorial Drive and I ended up stuck behind a chimney this year, this show was once again so spectacular that I nearly fell backwards into the makeshift hot tub on the roof (which would have been a very bad thing, especially for my awesome $3 jacket). There were fireworks that explode in the shape of cubes. CUBES! And smiley faces, but I don’t really get those because they explode upside down or sideways and you just kind of feel sad that we haven’t yet developed the technology to control how they explode–maybe you could major in Course XVI and invent some sort of mechanism to do that… I bet you’d make a million dollars. Mostly, it’s just awe of the fact that the entire Boston sky lights up for 23 minutes to a bizarre soundtrack which included “Dream On” (Aerosmith is a Boston band, remember), “Dreaming of You,” and some song about snow coming down (wishful thinking).

And finally we went out for pizza at the incredibly cheap and extremely Greek Despina’s place, a nice little Boston establishment right across the Harvard Bridge that’s open until 3 AM. It was also the first place I ever ate as an official MIT student, so I’ve always had a little bit of nostalgia for their slightly greasy, average-tasting pizza. 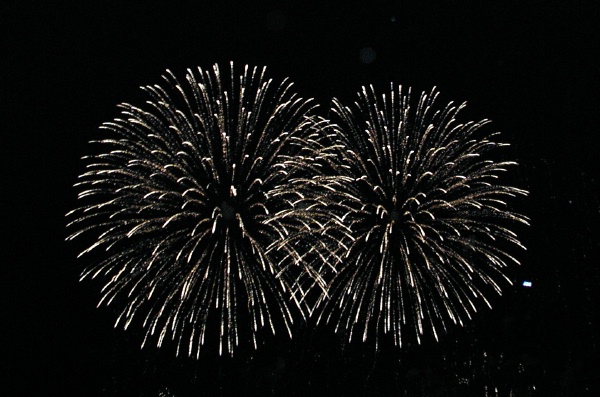 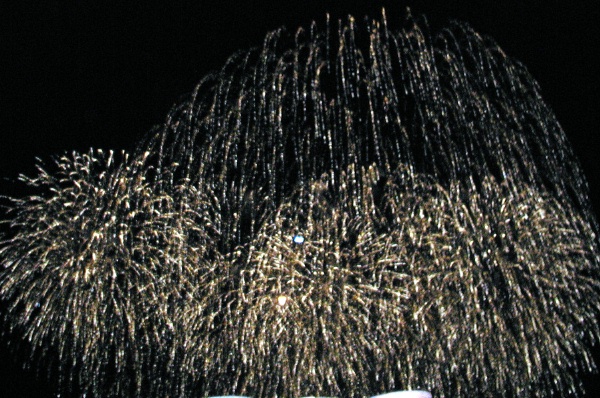 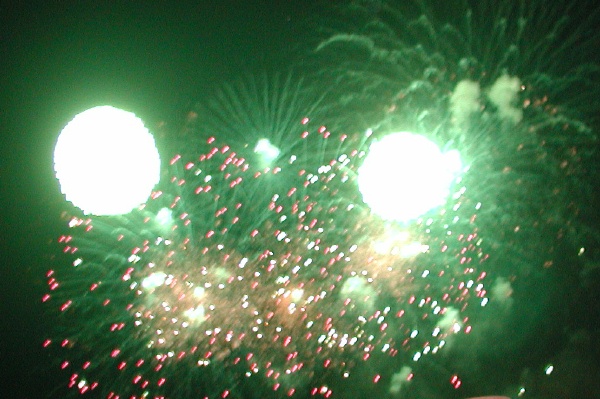 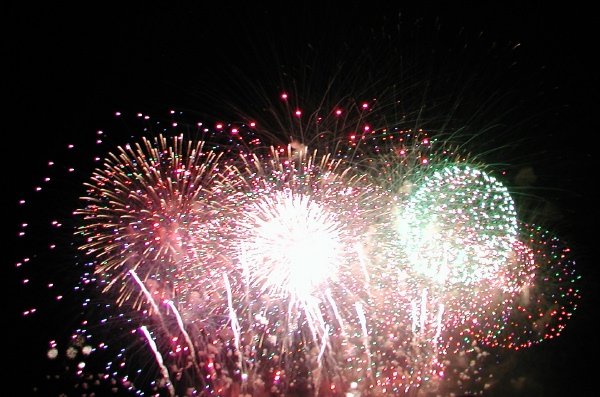 Granted, they would have been much better had I built my own floating vehicle–I think mine would be have to be made of inflatable dinosaurs leftover from President Hockfield’s Inauguration. Still, between the free concert and the show, this was one of the more goosebump-inducing days of my life.

3 responses to “Pageant and pomp and parade”