The triumphant conclusion! Plus, the CIA is watching me.

So I know the entire world has been waiting anxiously for the release of this, my newest blog entry. I hear the Harvard Book Store is even throwing a blog entry opening party, where you can get you picture taken with Sam imitators and giant turkeys and enter a raffle to win a replica of my trademark bunny hat. Don’t worry, nobody dies in this entry, regardless of what internet speculation sites have said. Really! Ruth’s just down in her hometown of Covington GA to see a football game and a free Garbage concert.

Well, first, you have to hear about my morning.

I got to work at 9:20 this morning because I woke up later than I had expected. I usually don’t shower on Thursdays, but I also usually don’t go to work with four colors of paint in my hair. Anyway, it wasn’t a problem because my grad student Andy is in Switzerland and I’m basically doing all his thesis research for him on my own for the next three months, so nobody really noticed. Anyway, Heather immediately informed me that Brian, a grad student in the next lab over, was defending his PhD thesis today and that our whole lab was going up for moral support. My immediate reaction was “Ooh! Free bagels!” and then my secondary reaction was “Oh, but I have to make up organic feed and sparge 55 liters of water and turn on the sandbath preheaters and ooh free bagels!” so I shirked responsibility for a few hours and went up to check it out. 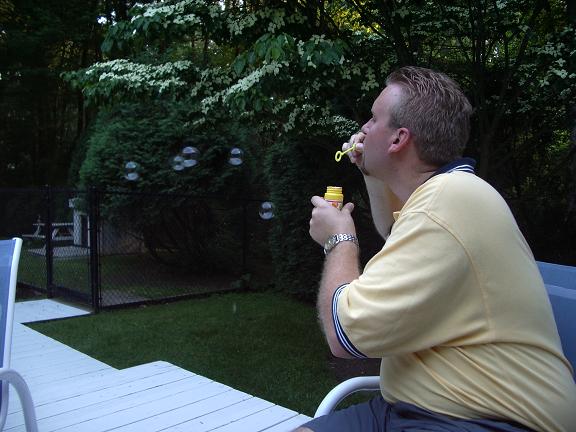 Over the past five years, Brian explored the molecular modeling of gas hydrates, which are nasty little solid creatures that can plug up gas flow pipelines if any moisture gets into them. Anyway, he gave what I assume was a spectacular thesis defense based on the three facts I know about molecular modeling, and everything seems to be going pretty well–the grad students are asking easy, directed questions, the professors are smiling, I’m eating an egg bagel. It was a good morning.

Then this one professor raises his hand and says “oh, really excellent presentation, but…” and then asks Brian to basically derive his entire thesis from first principles and come up with experiments in neutron scattering spectroscopy off the top of his head to test all the modeling he did and basically gives him like five seconds to respond to all these questions combined, and then made Brian admit every mistake he made during his presentation.

Well, it turns out that this professor was John Deutch, former director of the CIA, who’s famous enough that he has an entry on the NNDB. Apparently he lost a powerbook with government secrets on it during his tenure but then ended up being one of those people pardoned by Clinton during the last 20 minutes of his presidency. Well, for future reference, I think it’s best to try to avoid putting the former director of the CIA on your thesis committee.

I really like Professor Deutch’s resume–he has a BA in economics and history and then a BS in chemical engineering. Think about a career change, Mitra–maybe you can lead the CIA too.

So, I sat three feet behind a former CIA director today. I know it’s not cool as, say, almost meeting Bruce Campbell, but for some reason I still feel a little exhilirated by it. I mean, he really could have me killed, right? I hope I wasn’t chewing too loudly.

Alright, here’s the results of Ruth and Sam’s excellent painting adventures. Over the past four nights, we’ve probably each spent about 15 hours painting and this is what we’ve got to show for it. 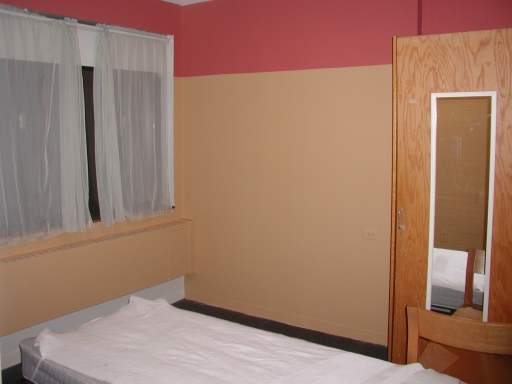 Ruth’s room, a vision in Parisian and Earth Dance. 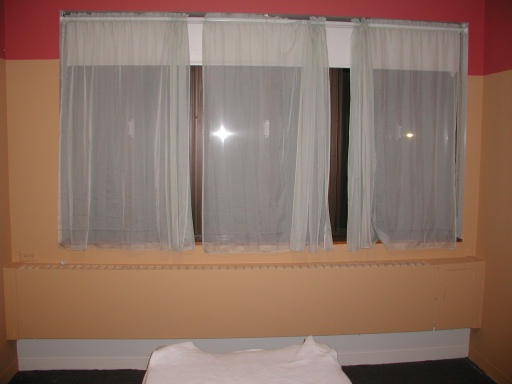 Ruth carefully picked out her colors to contrast these delicate celery curtains. Her room is the biggest on the floor and has three connected windows overlooking the muddy Charles River. 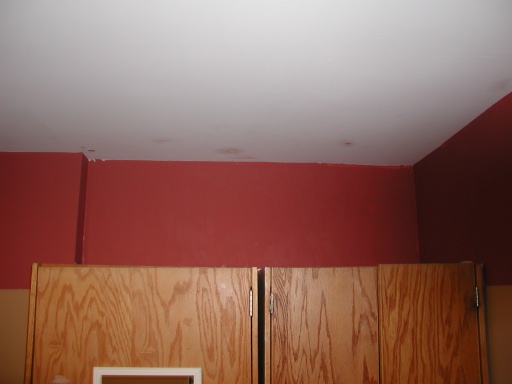 My death-defying cabinet-climbing paid off. Now she will stack luggage up here and nobody will ever see it. 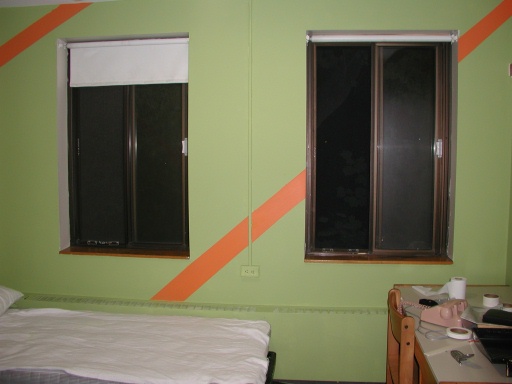 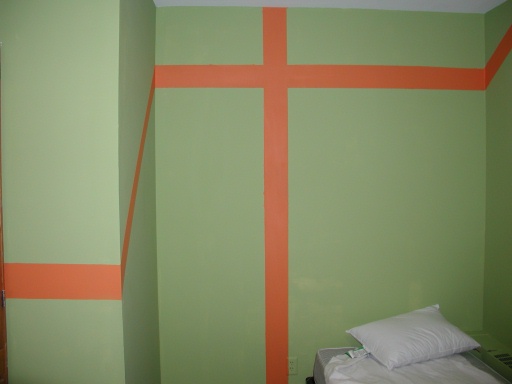 Looking to the left in my room. Eventually the bed will be placed in this little alcove so it’s against the left wall, but this requires precarious manipulation of cinderblocks, which I didn’t have available at the time. 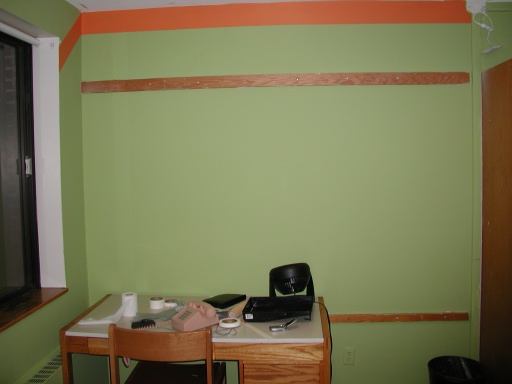 If you’re still curious about room-painting, check out Jessie’s entry on the subject in the East Campus dorms. I’m not sure about the policy in all West Campus dorms, but in Burton-Conner the rule is that you can do whatever you want as long as you

a) use latex paint
b) paint only the walls, not the ceiling
c) leave certain bits of shelving in place while you paint
d) return the room to off-white before moving out or face a $200 fine

Other than that, you’re free to do whatever you like to your walls in Burton-Conner. I have the feeling regulations might be a little more strict in other dorms though, with the exception of East Campus, Senior Haus, Random Hall and Bexley, which seem to enforce none of the above, really.

But, uh, painting is not easy, you crazy kids. Remember Thomas Hardy: “Nothing bears out in practice what it promises incipiently.”