I’ve been on campus for over a week now, which basically means that I’m being dragged around and coerced into moderately horrible icebreaker activities. In other words, Orientation is in full swing!

This also means that REX is over already. MIT is so hardcore that they give you less than 3 whole days to decide where to live this year. As for me, I seriously considered trying to move to East Campus for awhile, but in the end I decided to confirm my original assignment at Burton-Conner. The adjustment lottery was due Tuesday night, final assignments were posted at 6:30 Wednesday night, and we were all required to meet at our dorm at 7:00 WEdnesday for Floor Rush. So basically every single freshman on campus will be logging on to the server at the same exact time so they can have enough time to actually read the name of the dorm they’ve been assigned to AND get there. Like I said- MIT is hardcore.

Convocation was Monday afternoon (I think- all the days are just running together in my head here) and afterwards we all got a chance to meet President Hockfield. 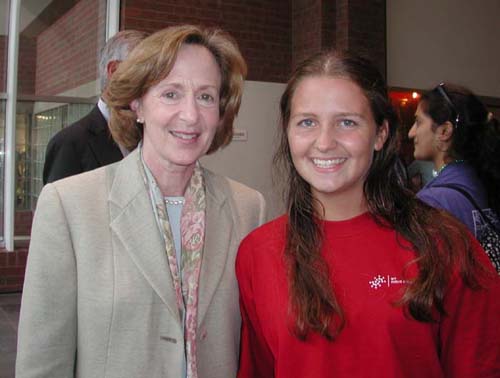 (By the way, the T-shirt I’m wearing is from CityDays, the Orientation event sponsored by MIT’s Public Service Center.)

Funny story- When I pulled out the digital camera and started to explain to the girl behind me what the picture would be used for, she got all excited and introduced herself. I happened to be standing in line in front of Laila! (It’s always half fun, half awkward when people recognize you as “oh, the Laura from the blogs! That Laura!”)

Speaking of which, during Floor Rush at Burton Conner, I visited every single floor like a good frosh. Conner 2, where Sam and Mitra live, had written on the dry erase board in their floor lounge “Conner 2: Home of the Stalked.” Well, the next morning we found out that I had been assigned to Conner 2 as well, so now there are three of us all on the same floor.

Field hockey is going great- we played in our first game against Gordon yesterday and we won! (Oh, and about that freshman team dinner- we just told everyone to meet us at Anna’s. Problem solved.) I love the location of our turf field, only because I noticed on the first day of practice that if you stand near the 50 and look slightly northeast, you can see Kresge, the little dome, and the big dome one right behind the other. It’s not a particularly pretty picture necessarily, but it really appeals to me. 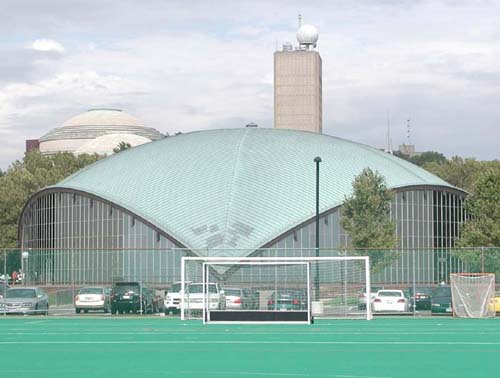 And now, we’ve finally made it to the “wonderful loft story.” Right after I finished my last entry, I got an email from Chris, an old friend of Sam’s. Chris is an ’09er too, and he had just moved into his temp room on Burton Third, the famously rowdy floor of the building. So I went over to visit.

Chris’s next door neighbor, Alex, was busy trying to hang his bike from the ceiling. Pretty soon, there was a substantially large group of people crowding around the door watching Alex and me lift the bike with the pulley system he built. They were all discussing who would be the unlucky person the bike would fall on. Alex of course was vehemently protesting that the bike wasn’t going to fall. In fact, it looked pretty cool up there, it looked like someone was riding it sideways along the wall. Unfortunately, we weren’t able to get a picture before the bike fell. More unfortunately, I would like it to be officially known that whatever anyone else was guessing, when the bike did fall, I was the one it fell on.

Soon after this, Megan ’08 reminded Alex that he needed to build her a loft. Building a loft is an elaborate project that involves several people, so Chris and I were recruited to help. We built the entire loft from scratch in about 3 and a half hours. The only problem was, we started at about 1 AM.

Also, Megan’s room is pretty small and she was building a pretty large loft, which made things difficult. The loft took up most of the space in the room, which meant we had very little room to maneuver the power tools we were using. 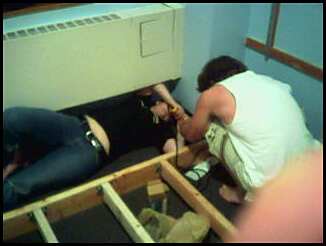 There’s Megan, squeezed under the radiator, trying to find enough room to fit the power drill.

We also had to cut a few pieces of plywood, which involved the use of a circular saw in the floor lounge. People were coming in, saying, “Guys, you do know it’s 2:30 AM, right?” We just said “yeah” and went back to cutting. The visitor would just shrug and go back to whatever it was he or she had been doing.

It was quite the adventure. Because of our help, Alex promised to help build lofts for me and Chris. I happen to have a ridiculously spacious double, so I think I’ll just be saving that promise for next year.

Speaking of my new (permenant! yay!) room, April (my roommate) and I have decided to paint it. There will be pictures.