Ajit asked: “who is the person in the 5th picture from top.roommate?i have few questions-
1.how many students(UG) share a room in the halls/dorms generally?
2.are there different halls for boys and girls /they live in a single hall but different rooms.are they allowed to live in a single room?”

There are actually two people in the picture you mention- the girl painting is April, my roommate. The guy sitting on the bed is Ace, April’s friend who came to watch us do all of the work like a true gentleman. He’s just a visitor- he doesn’t actually live with us.

About the number of people who share a room, freshmen generally do most of the sharing. (I don’t know much about how it works after freshman year.) Freshmen in most dorms are in doubles. One notable exception is Baker, where some rooms are designated as triples and quads. There are mixed feelings about the quads- some people love them and some people hate them. I suppose that really depends on who you end up sharing the room with and how well everyone gets along, because the rooms are pretty darn big. Keep in mind that in Baker, the rooms are designed to hold 3 or 4 people, so they are pretty spacious. They even have extra furniture in them and are generally pretty cool rooms. The second notable exception is MacGregor, where all of the rooms are singles. Other than that, freshmen rooms are generally doubles. Although ocasionally a few freshmen end up with singles, and sometimes there are extra people around, which means people are forced to “crowd” a room by turning a double into a triple. (Even this is planned out pretty nicely though- the largest doubles get crowded first.)

In terms of gender mixing, there is a very large spectrum in this area. Arrangements range from McCormick Hall, which is an all-girls dorm, to Senior House, where I’m pretty sure that one girl and one guy can share a double. Certain floors in Random Hall are designated as single sex, and suites in Burton-Conner can be either co-ed or single sex. For example, my suite is all girls, so we have a single-sex bathroonm, but there are other suites on my floor that are co-ed (like Sam and Mitra‘s, for example). The point is that there are all kinds of options available, and if you make a note on your housing preference sheets and/or speak to your dorm/floor chairs, they can try to accomodate your preferences.

Priya asked: “hey, What are these “reasonable restrictions” .. does the room have to b self coloured or can u paint funky pics all over the walls?? Does burton conner hav a nice view? say.. of the river??”

Well, according to Jessie, the restrictions aren’t reasonable at all. (Jessie lives at East Campus, which is one of the less restrictive dorms when it comes to modifications to the rooms.) The restrictions are namely that you can only use latex paint, you can’t move certain shelving pieces, and that you can’t paint the ceiling (I admit that this one seems kind of silly- if you’ve already painted the walls, what difference does it make?) Also, if you don’t paint the room back at the end of the year, you face a maintainence fine because someone else has to dedicate a few hours of their time to repaint the room for the next year. Other than that, you can do whatever you want. My roommate and I just painted the room blue, but Sam painted a pattern in his room. You could also go crazy and paint a mural or something, if you’re artistic. 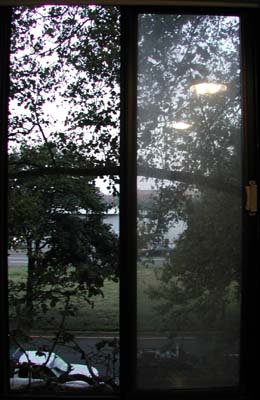 My window doesn’t have a screen, so I obtained the next two pictures by actually sticking my head out there to get a better camera angle. 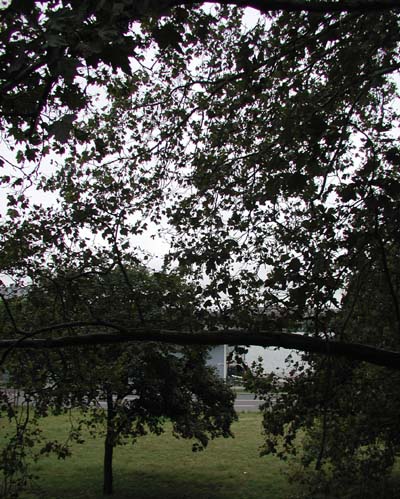 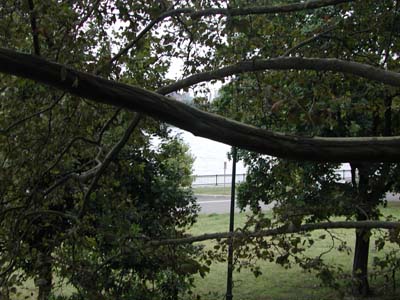 As you can tell from the pictures I posted in my entry about painting, our beds are pushed right up against the windows. This is nice (for now, while the weather is still nice) during naptime. =) I have two friends who live in the same room 2 floors up, and the rearranged their furniture to put their desks facing the windows so they have a nice view while they’re doing work, which is also a nice idea.

So that concludes today’s Q&A session. Please feel free to ask me questions, either by commenting on the blog or sending an email to the address in the banner. I’ll do my best to either answer it or send you to the person who can. As a general rule, I’ll post answers to questions in comments on the blog, but will reply directly to questions that are emailed to me.

In other news, I talked to my mom on the phone the other day, and she said that she liked reading my blog but that it didn’t seem like I ever did any work. So…

Coming soon– What I like about my advising seminar and 3.091.