Four things you would never expect to find in a real MIT laboratory.

As you may or may not know, my job this summer is turning turkeys into oil. How do you turn a turkey into oil? Well, Chester, according to Changing World Technologies, you take a turkey, cut off all the meat and stuff that non-vegetarians might eat, then take the carcass, throw it into a pot, grind it up, heat it up to 250 C and 40 atmospheres, dehydrate it, then heat it up to about 500 C, and BAM! distill off some usable heating oil. Not only do you get rid of agricultural waste (without feeding it to other animals), but you get a clean biologically-derived fuel out of it as well as some fertilizer and coal byproducts if you’re lucky.

But, oops, Chester, looks like when you heat the grotesque biological slurry of turkey carcasses (left) to 250 C, you get the Maillard reaction. This is a non-enzymatic browning reaction which is usually responsible for the deliciousness of caramel, golden-brown cookies, bread crusts, and seared meat, but in this case is responsible for huge, gummy brown-black polymeric complexes that stick in your reactor and prevent you from operating continuously. So, Changing World Technologies has asked our lab to develop a new method which will minimize the formation of these Maillard reaction products.

Basically, my grad student Andy and I are building a reactor and heating turkey waste to 250 C, then varying conditions like temperature, pH, buffer concentration, and residence time to see if we can prevent the Maillard reaction. Over the past year, my job has involved everything from hardcore organic synthesis to building a giant cardboard box in which to ship our defective sand bath back to New Jersey.

You can read all about it in this Discover article. Not to brag, but I got to have dinner with Terry Adams, who must be pretty famous and pretty smart because he’s quoted in that article. We spent most of our time discussing the worst-smelling jobs we’d ever had. Have you ever been to a mushroom barn, like in Pennsylvania Amish country? Well, actually, I have, Mr. Adams.

By the way, we don’t really use turkey waste–just a solution of glucose and glycine meant to simulate turkey waste, which still ends up smelling pretty rank when it comes out of the reactor. If we had used the real stuff, I fear I would have quit long ago.

Anyway, the rest of this post is on a somewhat lighter subject (get it?). You might expect an MIT laboratory to be really sterile, stuffy, and clean, but our lab is far from it. Well, I mean, not too far. Oh, just read on to find four things you’d never expect to see in an MIT laboratory. 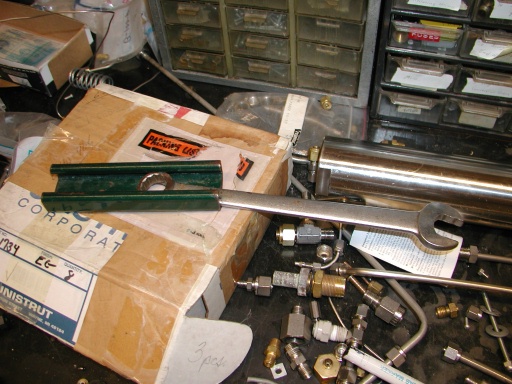 Nobody knows how it was even physically possible to get this pipe wrench stuck in a piece of Unistrut, but somehow it happened. Actually, it’s really useful because it’s quite solidly embedded in the Unistrut and it’s not going anywhere. So, if you ever need to tighten something that’s, say, 13/16 of an inch wide, you get an extra 6 inches or so of lever arm (torque equals force times lever arm). Maybe it was intentional. 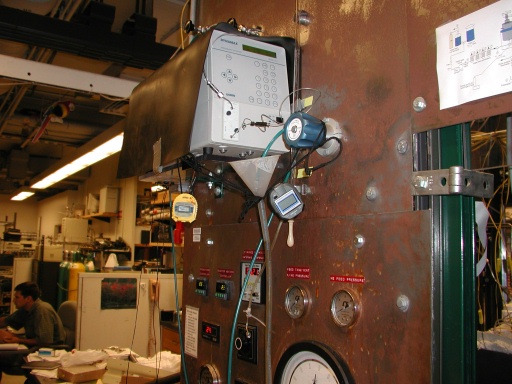 This week Andy and I are just doing a residence time study on our reactor, so we only need to set up this UV spectrophotometer temporarily. Still, I think suspending our waste funnel by the strings of two stopwatches and a binder clip is a little too much Macgyvering when we have, you know, string and rope and tape and stuff in the lab. The stopwatches are both broken, though, so I guess it’s in the spirit of our lab to recycle them (like we recycle turkey waste, get it?). 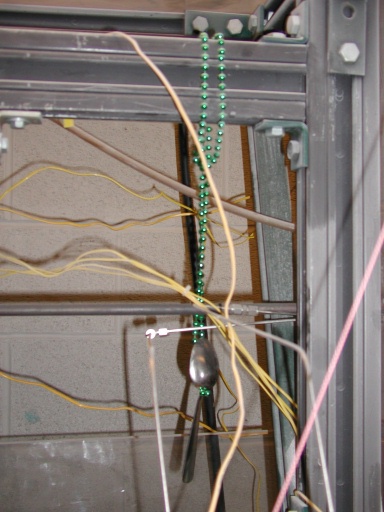 Jason, who’s working on the degradation of ammonia in supercritical water, is convinced that his reactor only works as a result of magic beads. One day a distinguished professor came to our group seminar and handed out Mardi Gras beads. Because it was Mardi Gras. Then somehow Jason acquired this spoon, which also seems to help the functioning of the plug flow reactor. Sometimes he bumps the spoon in the morning and worries that the reactor will stop working for the rest of the day because the spoon is angry. Jason has two degrees from Berkeley and should be receiving his PhD from MIT in January. 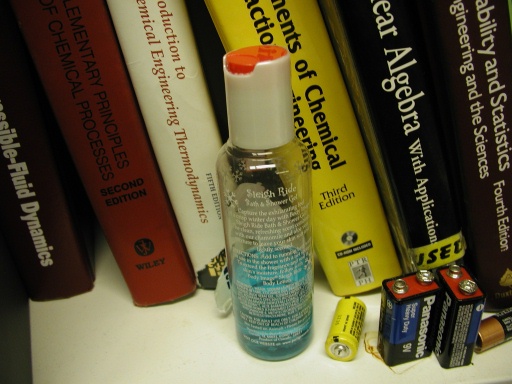 This is Chad’s “Sleigh Ride” Bath & Shower Gel… because you have to look and smell your best when you’re researching underwater flame spallation rock drilling for applications in harnessing geothermal energy. No, actually, I have no idea why he keeps this in lab. But one time he drilled through a rock with a blowtorch! Also, he makes underwater fire!

Well, that’s my lab. Time to get out now.

Isn’t that what they used to say on “Cribz,” that MTV show where you show off your room?

That’s what I was going for, anyway.

I never watched that show.

4 responses to “Reactors are my friends.”