A few comments on the past week.

Blogging, for me, has never been about immediacy. Life as it happens is usually incoherent, a bowl of liquid gelatin wriggling with light. Life after it happens is at least semi-solid enough to serve on a plate for dessert after you’ve poured it into a mold and refrigerated it for 4 hours. As an exercise in uncreative writing, I will demonstrate this by blogging in real-time for ten minutes:

10:23 pm: I cough for approximately five precious seconds of my life.
10:25 pm: Someone has sent me an email about recycling, etc. I consider reading it and decide to keep blogging instead, because Matt McGann does not pay me for recycling.
10:26 pm: Should I have a granola bar for lunch tomorrow? The grotesqueness of bananas browning in the pantry is practically palpable, even upstairs. As pika‘s summer kitchen manager, I have developed strange paranoias. Are there banana-flavored granola bars? There must be. Granola bars can taste like anything. It’s practically a theorem.
10:28 pm: This is a waste of blog. I can feel my youth dripping away, slowly, like melting bananas.
10:30 pm: Eight times forty-two is a big number. Big enough that I won’t feel like typing it out in words if I calculated it in my head right now. Guess I won’t.
10:32 pm: I once tread water for ten minutes as part of the MIT swim test. Should have blogged it live. I wish it had a soundtrack though.
10:33 pm: I really, really need to cough again.

Anyway, because it’s summer, I won’t even try to justify why I did that.

Monday was my prolonged experiment in discretized sleep; I slept for probably 12 hours in segments of varying duration, each at a randomized location (Athena cluster, green sofas in the Infinite Corridor, green sofa in Random Hall, chair in my room, bed, etc.). The hours of intermission sort of blurred into a watery blob of fervent exhaustion. Like, I couldn’t stumble three feet without accidentally falling under some legal definition of “asleep.” Despiteless*, I managed to run four miles, throw together a tofu-tomato-mushroom salad, get a second UROP in MIT’s Plasma and Fusion Center, read a paper on global warming, catch tuberculosis** and work in lab for 5 hours.

*Don’t try googling it. I made up this word, but you know exactly what it means.

**After I recovered 43 hours later, I decided that it was probably just a cold. I have this secret dream that I will someday be the first person to say the line, “I don’t have tuberculosis, but I think I’m catching YouTuberculosis.” Now I just need to find a context.

Did I mention salad? pika’s resplendent pantry gives substance to my dream of becoming the world’s first self-proclaimed computational salad engineer. After a few nights of condiment debugging*, I released the first stable version of Balsamic Bal-salmon 5.28, featuring pink salmon, leftover lettuce, scallions, and bean sprouts, topped with lemon-yogurt dressing and black sesame. User interface consisted of a fork and a quadrilateral plate. The final product was savory and well-balanced in a mild, unassuming manner but could have used more zing.

*Ex: figuring out that the combination of honey mustard, mirin, and lemon juice doesn’t exactly compile as expected. Luckily, literal bugs were not found in any of the ingredients. 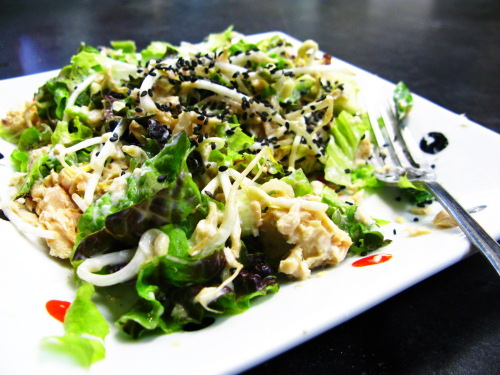 The next distribution was unveiled 24 hours later. Tangy Tomato 5.29 introduced the successful integration of balsamic vinegar, soy sauce, and Vietnamese fish sauce. I reused the same lettuce/bean-sprout salad and implemented tomatoes, crumbled tofu, and sliced peppers. The tofu turned out to be explosively flavorful after a brief marinade, and the tomato/balsamic pairing made my mouth weep with joy. Next stage: beta testing. 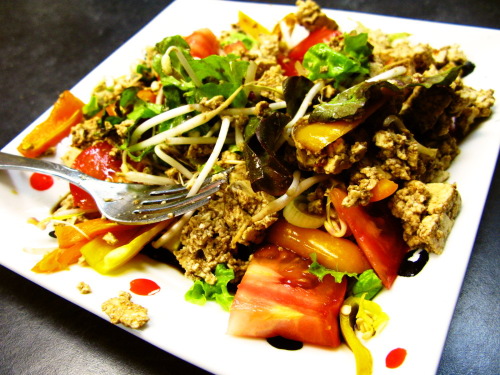 (I’ve decided to make all of my salads open-source. Comment if you’d like the documentation, aka recipes.)

I confess that I’ve probably drank about half a bottle of balsamic in the past four days. I’ve thought about submitting this to PostSecret, actually.

Let’s go back to the night before Sleep-a-thon 2009, when I was frozen in awe, frozen in time, and near-frozen in temperature for a lovely, numbing eternity. I can’t remember the last time I was so far away from the city. I looked up, stretching out after a fuzzy grey nap in a borrowed jeep, saw the stars like pinpricks on velvet, suctioned cold mountain wind into my lungs, and felt the lightbulbs explode behind my eyes. MIT was 4.08×10^-12 light years away in the unlit distance. The stars were closer by a hair’s width; space disfigured such that the soft fringes of the Milky Way were closer than the strict edges of my 18.03 textbook, the Ring Nebula veiled under telescope lens clearer than the Kresge Oval curved through window glass, Jupiter silently staring across the deep horizon at 2 AM brighter than hospital-white computer screens blinking at 200hz in the unseen hours of the morning. University faded into universe, vastness expanding past the yardsticks of comprehension.

I slept for three hours until dawn, caught tuberculosis*, and temporarily forgot all of Maxwell’s equations.

Because you are now expecting me to close this blog entry with a tasteful adage topped with cream-of-metaphor and delicately salted with wit, I walked to the park earlier that day and photographed baby geese so I could end my story with something irrelevant to everything I have written so far. Consider this my letter of resignation from AP English. 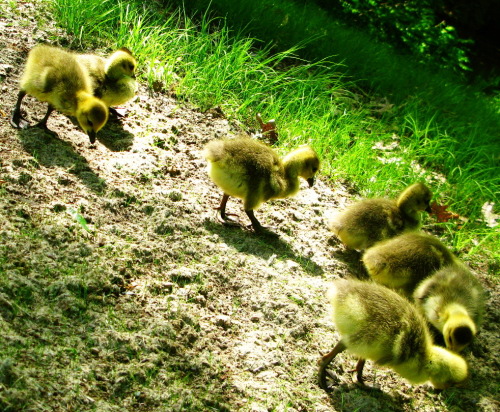 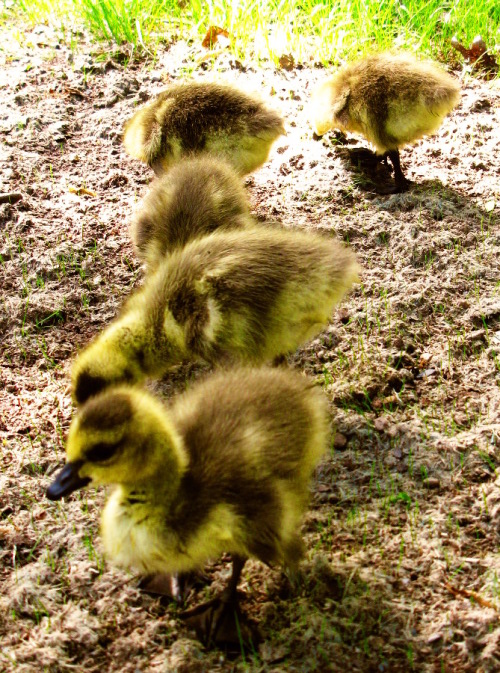 This is Matt Ritter ’10. The delightful, crisp-at-the-edges consonance of Matt Ritter’s full name demands that he be referred to as Matt Ritter and only Matt Ritter. Last weekend, Matt Ritter stood in the pika kitchen and ate an ice cream sandwich topped with Spaghetti-O’s and Fruit Loops and bottled lemon juice, all between two slices of whole-wheat bread. Matt Ritter. 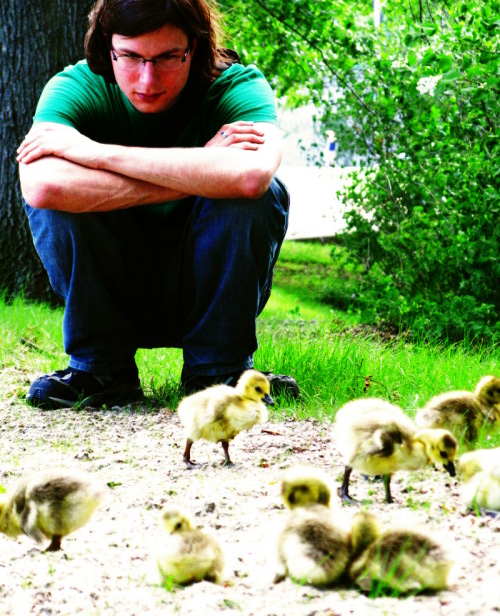 Matt Ritter and Alorah ’10, caught in a lyrical flash of spontaneous synchronization. 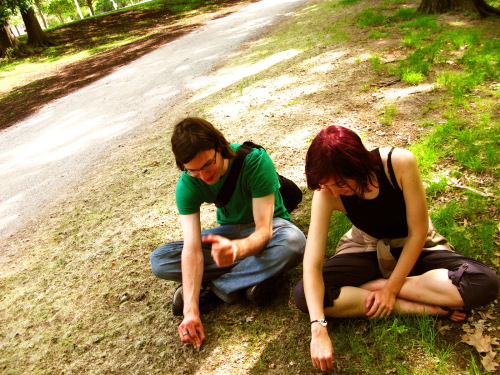 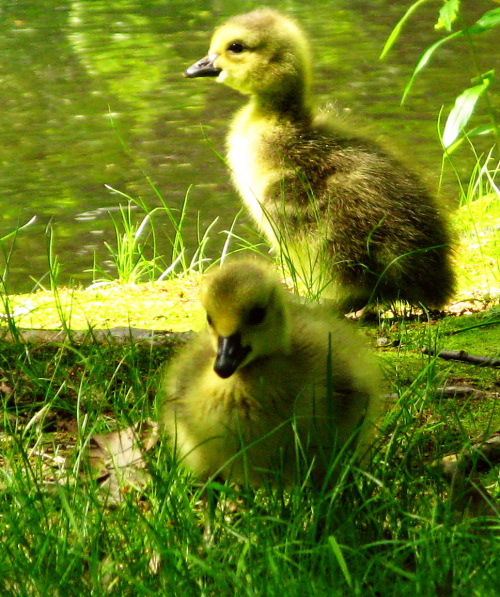 Anyway, because it’s summer, I won’t even try to justify why I did that. [Refrain]