"Do we start and end at the same place on the river?"

I have so much work to do tonight, but I just fell off a treadmill in the Z-Center (no, really) and I’m so disheartened by this that a commodius vicus of recirculation has brought me back to Turkey vs. Spam and environs.

But I’m obviously not a natural runner, and I’m most assuredly deprotonated.

Anyway, when you last left your hero the other night, I was about to go whitewater rafting in Maine with my dorm. I did such amazing things as riding kamikaze and watching the aurora borealis. Of course, I don’t have any pictures of these things because you can’t take pictures in the dark or on a whitewater raft. You silly silly vern vern.

So, read on for a well-crafted narrative and exciting pictures of an apple farm.

Saturday morning was OUT OF CONTROL! Mitra was all, “oh, let’s run 8 miles, Spammy” and I haven’t learned how to say “no” to people yet, so I had to oblige. So, I ran with her, like a stunned grouse, for one hour, nine minutes, and seventeen seconds, and then I came home and passed out on my floor for two hours. Ah, it reminded me of the good old days before I dropped 18.701, except with less sheer physical agony.

I was finally awoken when my ex-prefrosh Greg, who happened to be in Cambridge for the weekend, called me up and invited me down to Harvard, which of course takes its name from the fantastic Harvard Bookstore. It turns out that the Harvard Business School throws an amazing, spectacular “block party” on the second Saturday of September every year, with tons of delectable food, bouncing implements, and pony rides. Pony rides! Best of all, they didn’t seem to have any way of checking whether visitors were actually affiliated with Harvard. So, you know what this means–another day’s worth of free food to add to my calendar next year! Anyway, Greg and I spent the better part of an hour catching up on our summers–he lived in a mountain village in Mexico drinking rainwater for seven weeks, and I, uh, saw an ostrich. Well, uh, I also tried to solve the energy crisis, I guess.

Fearful I would be late for the rafting trip’s departure, I biked back from the business school very carefully and safely in the easily navigable, placid Boston traffic, sprinted to my room, and began throwing its entire contents into a small purple duffel bag. I made it downstairs with mere seconds to spare, but luckily the bus driver was twenty minutes late. Even more luckily, he turned out to be among the top twenty professional bus drivers on Earth, making it safely up to Maine in what must have been record time. The ride was so smooth that I fell asleep in the middle on Moulin Rouge, had my embarassing drooly picture taken by Chris ’09, and awoke without even realizing that I’d missed anything in the movie. That’s Baz Luhrmann’s fault, though. Also, it was peppered with obscure New England highway history, the likes of which can’t usually be found on a simple charter bus.

On the way, we just happened to stop in Portland, Maine–and in an area that I recognized, no less. Unfortunately, the only landmarks I remembered were a fish refinery and the toy store where Joe and I first discovered the X-Knot, so we had to settle for submediocre pizza instead of finding some delicious and affordable hole-in-the-wall. Faced with the problem of dividing an eight-piece pizza among the five of us, we decided to each eat one-and-a-half slices and then pass the last one around family-style. Then I took this picture. I don’t know why, but it came out well, so you have to look at it. 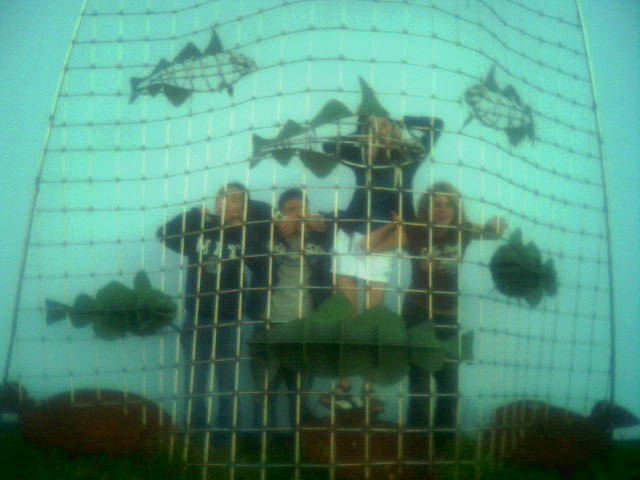 A lot of people didn’t go on the rafting trip this year because we were camping outside instead of staying in a really nice motel in Jackman, “the Switzerland of Maine.” Well, we departed from our bus to find four lovely, fully-furnished cabins with running water, heating, and over 200 channels of cable television. I daresay that accomodations this year were even better than last year, though I did miss my hostess’s charmingly bizarre accent.

Much of what Megan says must be censored for content.

Still, we were pretty far from civilization, and despite the beds and blankets and paintings and procreating, I was awestruck when I noticed the Milky Way for the first time in my life. Later that night, we played Mafia, but that’s not important, because in the middle some people burst in to tell us we were missing the aurora borealis. Like Jessie noted in her comment the other night, I had no idea that Maine was northerly enough to get a good look at it. However, it was unmistakable, moving, and one of the most breathtaking natural phenomena I’ve ever seen in my life. This alone was definitely worth the 25 dollar price of admission for the trip. It was also fascinating because I had no idea how the aurora worked, except for some vague concept of magnets and ions and solar wind (oh my!). It was maybe the first time since I got to MIT that I appreciated something for its beauty without realizing exactly how it worked.

By the way, the rafting adventure alone normally costs 80 dollars, plus gas, meals, and lodging for a night. God bless dorm subsidies!

The rafting itself has exactly the same river, guides, rafts, stories, and lunch every year, but this year was by far the best because I didn’t let the rafting company talk me out of putting on a wetsuit. After this week, where I’ve experienced both 94 and 42 degree temperatures (that’s how New England works, you dirty Californians), I’ve decided that I basically hate all weather. Anyway, they always tell me that a wetsuit will make me unbearably hot, and I always believe them, and then I always shiver so violently that my body starts to break down at the molecular level. This year, I was still unbelievably cold, but at least I had a wet suit on. Next year, thermal underwear.

Also, over the years I’ve been slowly working my way forward in the 8-person raft. This year, I took the frontmost seat for the most violent rapids, and I think I’m finally ready to just sit back and relax next year. Actually, the real frontmost seat is “riding the bull” on the very tip of the raft, but after seeing Zach ’08 tumble backwards into the raft after a particularly formidable wave, that’s not really a life experience I necessarily need to have. This might have been the most memorable quote of the trip: “The bull rode Zach.”

On the way home, our driver, Mr. Awesome, arbitrarily stopped by an apple farm on the side of the road and extolled the taste of their pies for us. He said we could have fifteen minutes to buy whatever we wanted. LOOK, I WAS REALLY EXCITED ABOUT THE APPLE FARM: 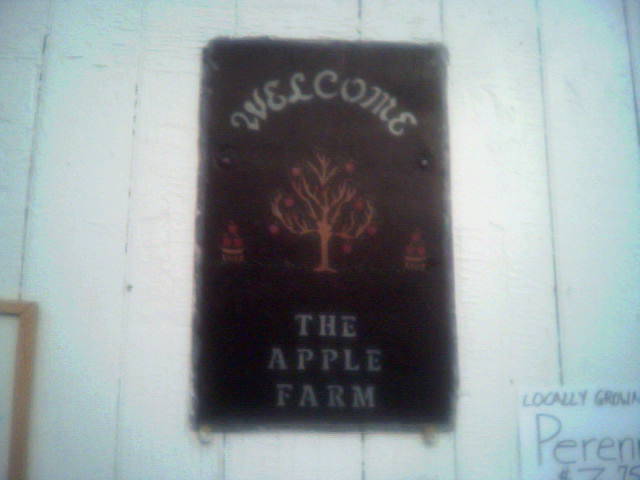 I got half a peck of Fancy Paula Red apples and tried some free hot cider and coffee cake with fresh preserves. No, not that Fancy Paula. I also joined Ling in a chorus of “A Bushel and a Peck” from Guys and Dolls, which I performed way back in 1999 and sang countless times with my Aunt Jeannie in my idyllic youth. Oh, that took me back.

But speaking of songs that were staples from my childhood, I was on the bus with Megan ’08 and she somehow ended up listening to my iPod. Now, I admit my iPod doesn’t have my favorite songs ever on it; it’s just some peppy music to play while I’m running, so I was a little self-conscious about letting her listen to it. Also, Megan is so hardcore indie that it hurts my eyes to look at her. 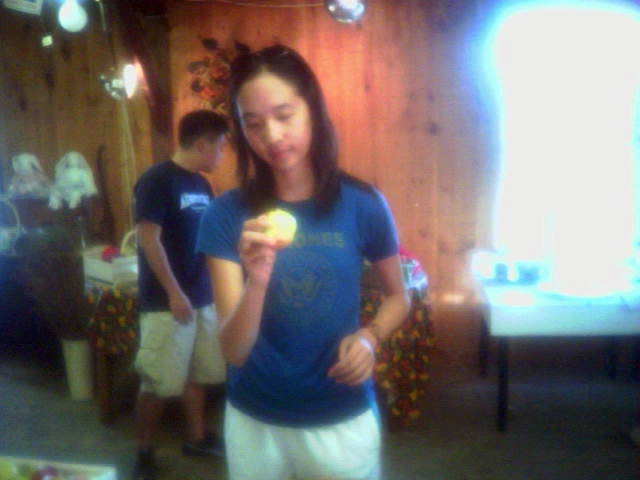 Ouch. She has a show at WMBR, MIT’s student-run radio station, called “You and Me and the Moon” that regularly features such artists as Iron & Wine, The Kaiser Chiefs, The Cocteau Twins, and pretty much anything that you’ve never heard of before. Well, much to my surprise, Megan found a song she really adored on my iPod; she listened to it several times, played it for everyone around her, and even started singing along–“way-oh! oh-way-oh!” I spent a good four or five minutes trying to figure out what it was before she declared it “the best song ever” and demanded that I send it to her so she could play it on her show. She was even more excited when I told her that there was a corresponding dance to the song.

She was listening to “Walk Like An Egyptian” by The Bangles.

Now, it’s a fantastic song, but I think it’s a little too “I Love The 80’s” for an indie radio program, don’t you? Anyway, it was just curious, because along with “A Bushel and a Peck” and “Paperback Writer” by the Beatles, it was pretty much my favorite song growing up, a fact which Sam’s Mom will probably dispute, but it’s totally true.

Then I got home, thanked our driver, and set about on all the homework I had ignored on account of the aurora and the rafting, which kept me up until around 4 AM.

And as for all your comments on the last entry, I will concede that I may be too trusting of human nature to operate a successful fast food establishment, as Spencer implies. Still, Mollie’s suggestion is by far the best I’ve heard–and I had this discussion with like 15 people. I’ll definitely try it the next time the situation occurs. The only problem is that it doesn’t work for Hindus or Orthodox Jews. You can’t win them all, I guess.

10 responses to “riverrun, past Eve and Adam’s”