Introducing the world’s first-ever* joint MIT admissions blog post! Brought to you by bloggers Canna H. and Am T. and a pair of mouse ears.

*Backed by absolutely no research or factual evidence. 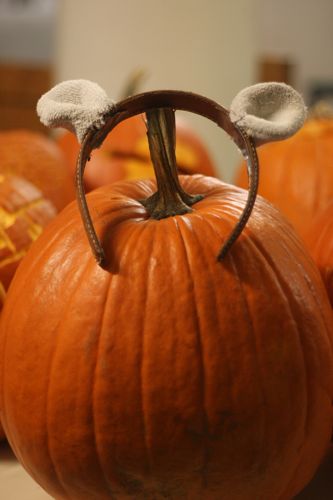 Cam:
First, we have a Halloween story. There are two things scary on Halloween: college applications and cats. College application cats. Also, last night we discovered a new qualification for becoming an MIT admissions blogger: you must be scared of the dark. Bold, courageous students need not apply.

Last night, after the requisite parties, pumpkin drop (pumpkins falling from the tallest building in Cambridge — always a fun event), and various other shenanigans, I met up with Anna and the aforementioned Lucy to go for a drive. Driving by muscle memory led us to Wayland, my small, moderately nowhere-ish hometown. Surprise discovery: nostalgia isn’t nearly as enjoyable when you’re talking about scary movies on a cold, dark Halloween night.

Anna:
Now, picture this: Cam and I, in a car, in your stereotypical scary movie setting. An intersection in middle-of-nowhere suburbia, at 3am. Power lines and a small rickety corner store.

The headlights fell on a cute little kitty who jumped off the front porch and padded down the sidewalk – so, appropriately, I squealed “CUTE KITTY” and pointed. As Cam glanced over, the cute little kitty snapped its head around and two evil, glowing orange eyes fell on us.

I am not making this up. Glowing orange. There was no doubt that they were pure evil. Cue the following dialogue:

We were out of there like a shot. Being adventurous and exploring the outskirts of civilization suddenly seemed much less appealing when there were clearly demon cats out and about.

Cam:
I think that if it were just a tiny bit colder, I would’ve burned rubber. We peeled out of there like the city-slickers we apparently are, and decided to head for warmer climates for the summe… er, to more well-lit, people-filled places for the night. You’ll have to excuse me; sometimes I mix up bloggers with migrating birds. Anyway, the rest of the night saw us to IHOP, with apparently half of MIT and various drunken partygoers, back to campus, briefly to Wellesley College, and then home safe by the gentle hour of 6:30AM.

All this, dear readers, to bring you entertainment and distraction in your final hours. Look at what we do for you. We almost fell prey to a demon-cat.

Anna:
I would like to mention that all of the “rest of the night” activities Cam listed were carried out with much shivering (about 90% terror and 10% cold), much laughter (90% terror and 10% our own jokes), and much appreciation for the company of other people (Cam: especially 1) the state trooper at IHOP and 2) friends we ran into there). I would also like to add to that list of “rest of the night” activities by saying that, at 5:55am, I turned 18.

Last year, my first post-birthday act was to hit the “submit” button on my Early Action applications.

Cam:
INTERRUPTING BLOGGER WHO? Wait, I messed up that joke. Whatever. So, at the start of this post (which we are writing using VNC – computer screen and keyboard/mouse sharing), Anna and I were debating how to transition from college stories to cat applications, or some amalgamation of those, and she suggested using the cheesy segway: “Speaking of scary things,” to which I responded with much glee, mostly because I wanted to use a cheesy pun (double-pun intended). However, I see now that Anna is committing the crime of writing well and with smooth transitions, which deprives me of my basic right to punnery. Curse you, Anna (kidding).

[Retroactive edit]
Disclaimer: We’re about to launch into a long-ish section on college applications; what we’ve written below is just the perspective of two long-winded MIT students, and not of the MIT admissions office. Please take it with several moles of salt, and maybe some pepper (that is to say: it’s just our opinion, and we have no bearing on the admissions process).

Anna:
…Now that my brainstorming process has been exposed, I’m going to continue off my final choice of segue. In case you were distracted by the seg(ue/way), cheesy, and pun pictures, let me redirect your attention to what this post was actually supposed to be about. You have a little over 24 hours to submit your application, which probably means that you either a) have submitted it, or b) are fervently re-reading every word, making sure it’s all perfect, and double-checking that you did, in fact, tick the right gender (that’s the last thing I checked on mine).

There’s something I’d like to say about editing, which is that I think it’s possible to over-edit. By “over-edit” I mean edit out your natural voice, for the sake of producing a piece of grammatical, spellastic* perfection.

That’s not to say that you shouldn’t check for typos, or careless basic grammatical mistakes. It is to say that your tone of voice is what makes the essay sound like you, and I think that the three-dimensional you, quirks and all, is a lot more precious than a two-dimensional, flawless piece of paper.

Towards the end of the essay-editing process, I asked some pairs of fresh eyes (in the form of family and close friends) to take a look at my essays, taking care to stay away from people who might know a great deal about writing essays but not much at all about me. I didn’t ask them whether my writing was “perfect”, or whether it sounded particularly intellectual, but rather whether it sounded like me. The best feelings came from the “haha! Yes! This sounds exactly like you!” comments.

As the clock ticked to 10:55am (London time) I scanned over the essays once more, feeling satisfied that I had genuinely gotten the essence of myself across. At 10:55, I turned 17, and hit the “submit” button. I then went outside, hung out with some friends, and relaxed.

And was lucky enough not to run into any demon cats.

Cam:
I’d like to take a second here to talk about something along similar lines. This summer, a friend from my high school was texting me (hello 21st century kids: try calling, sometime… text messages are not as good for conversation. grumble, grumble, grumble) asking about MIT, and I suggested she come into the city and we talk about it / do a short tour of the campus, my dormitory, etc. She came with a list of questions that her parents wanted her to ask “an MIT student”, but also some that she had for me personally. I think what bothered me most — not about her questions specifically, but about the larger attitude that many people have towards college applications, of which her questions reminded me — was that the questions were in large part about what an application “should be”.

There is no “should be” college application. You don’t need to be writing about your 4.0 GPA, your cure for the common cold, or the impressive roles you’ve held in your long list of significant extracurricular activities.

There is no “must-join” club for college applications, there is no “must-have” GPA; what matters is that you had passions, you followed them, and in them you found success — or failure.

My last-minute advice would be: do not focus your application on what you think it should have — if you think MIT cares a lot about math, and you spent a week on the math team in sophomore year (cough, cough, me), don’t prioritize that on your application over the many hours you spent reading and writing science fiction (or whatever you may have done) after school. If you’re deciding what to prune from a too-long application, or choosing what goes on which list, then: focus your application on the things that matter most to you, whether they’re conventionally “impressive” or not, and through that you will shine.

I guess how this applies to early action applicants right now is how it applied to me when I was finishing up my application; I’d written four different “big essays” for the essay question, on two or three different topics (there was some overlap); in the end, I chose the one that I cared most about, and I think that was the most important choice. The choice wasn’t the essay with the best sentence structure and variation, or the most spellastic essay, but rather the one that I was most driven to write.

Anna:
A final word from us: good luck, don’t stress too much, and Happy Halloween! 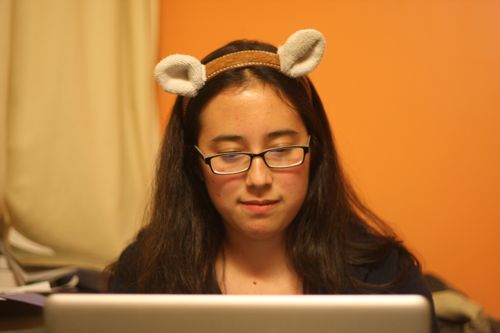 Wild blogger, hard at work in its natural habitat.