This has been a long time coming. Text- and picture-heavy! Link- and acronym-happy! Take it all as a token of my affection.

Last week, I dropped 9.15 from my preregistration schedule for the upcoming term.

It hurt me to do it; 9.15, only offered in alternate fall terms, was the class I was looking forward to the most. The problem, however, was this:

Regardless of how set I am on this illusion that I am working towards a dual degree at MIT, doing 72 units during my first term entirely on grades – especially the 72 units above – isn’t really the best idea. (Neither is doing 60 units including both 5.07 and 5.13, but there’s no avoiding that.) Some of you have already heard the following edict: “Work, friends, sleep – pick two.” This is exactly what I’ll have to do very soon. It’ll be a huge comedown from last term, where by some miracle I managed to get all three.

For those of you who just skipped the beginnings of a rant above, here’s a brief summary:

Classes. Lots of them. Grawr.

Enough about my schedule. Let’s talk about yours. And by “yours,” I mean you. Yes, froshlings. You.

You’ll all be here in two weeks. Your friends at other schools may all know what they’re doing, where their classes are, and at what ungodly hour they’ll have to wake up so they can make it to their 7AM chem lab on time. Meanwhile, you don’t have a definite housing plan yet and you’re sitting around wondering what in the world a Math Diagnostic is and how many Advanced Standing Exams you should take and what 8.012 is and if you should take it in the fall and hey, how come MIT doesn’t give credit for 5s on the AP Bio exam anymore?

Never fear, for answers are here! (Except for the AP Bio thing. I have my theories – maybe the AP Bio curriculum doesn’t match up with 7.012/3/4/5 well enough for you to continue receiving credit for it? – but since I don’t know for sure, my on-the-record answer is “they just don’t.”) I’ll even give you responses comprised of more than just saying that 8.012 is Physics for Physics Majors and Crazy People. (It is.)

But first, a ridiculously simplified picture of what your schedule should look like. It’s on neon yellow paper because everything neon is awesome. You know I’m right. 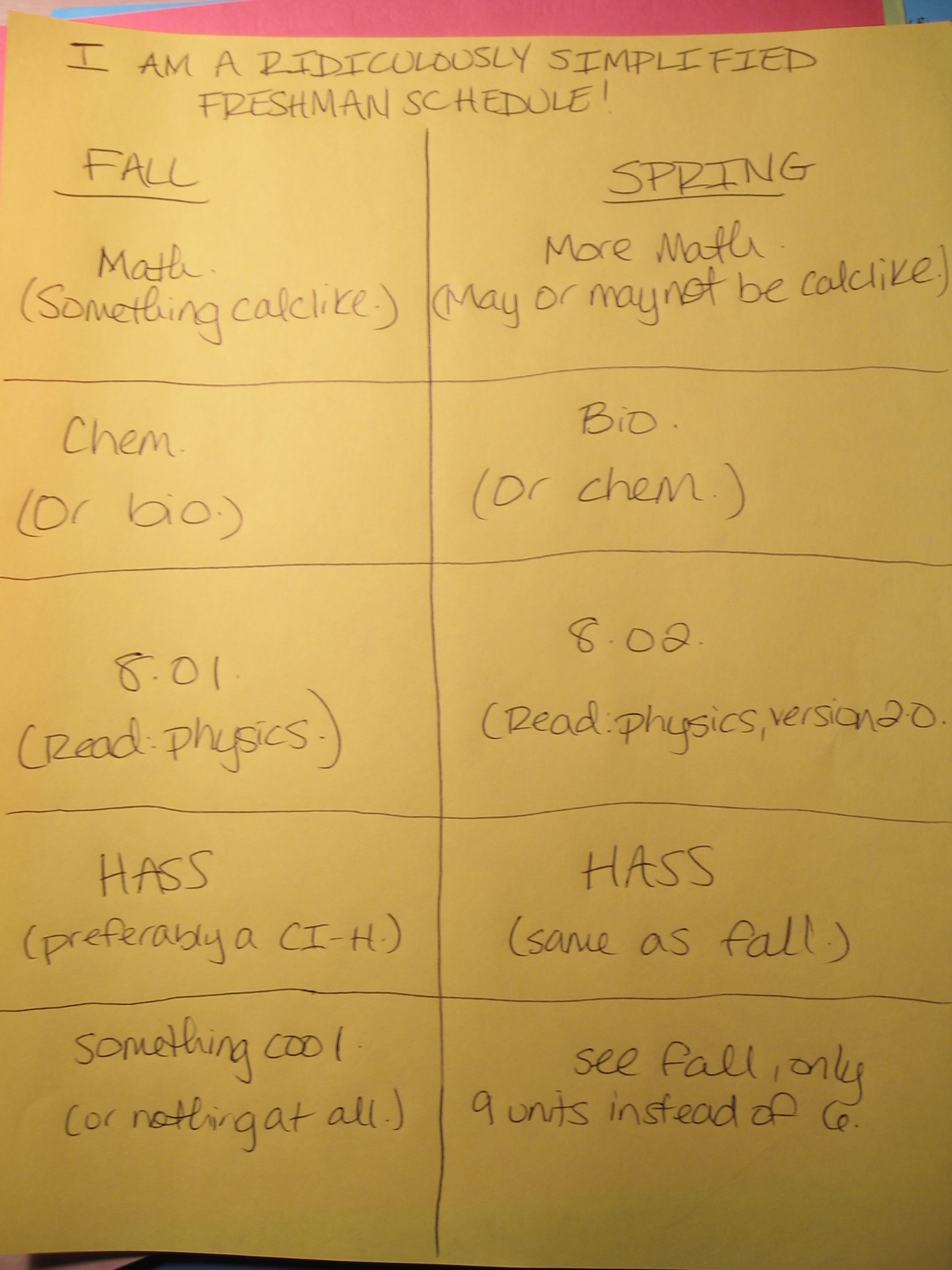 I know you’re already forming “what if…” questions about AP Credit, college courses, making it through freshman year with no previous experience in physics, and more. That’s why I also created the following list.

A FALL-CENTRIC, FIVE-PART LIST OF EXCEPTIONS TO THE RIDICULOUSLY SIMPLIFIED SCHEDULE ABOVE
(Numbers in place of class names will be prevalent, but don’t worry – I’ve linked to class descriptions for all of these.)

Most people take Chem in the fall and Bio in the spring. Two of the three freshman chem classes are only offered during fall term (3.091, usually taken by aspiring engineering majors, and 5.112, for the truly masochistic. 5.111 is available in both fall and spring terms.); the opposite is the case for Biology, with both 7.013 and 7.015 being spring classes and 7.012 being fall-only.

Here’s a reason to take biology first term, though: Eric Lander, one of the leaders of the Human Genome Project, teaches 7.012.

3) Physics and the Math Diagnostic.

5s on both parts of the AP Physics C exam gets you out of 8.01. Regardless of whether or not you’ve done that, you’re taking the Math Diagnostic during the week before classes start. Based on your score on this exam – a short, calculus-free, no-calculators-allowed evaluation of your basic math skills up through exponential and logarithmic functions – you’ll be advised to take 8.012 (as stated before, this is Physics for the Truly Insane”), 8.01L (8.01 held through the end of IAP, for people without much calculus or physics experience), or good ol’ 8.01.

Some students take 8.012 because it, unlike 8.01, uses a standard lecture/recitation format. 8.01 uses TEAL; rather than give you a botched explanation of TEAL, I’ll simply give you a link here.

4) Humanities and the FEE.

There isn’t much to say here. Take a HASS class that interests you; otherwise, you will suffer greatly and come to despise all things humanities-related. (The same can be said about most other classes you will take, but this is one of the few places where you’ll really have some leeway in your freshman schedule. Make the most of it, willya?) Take a CI-H to get them out of the way, since you need to take two of them and they should be completed by the end of your sophomore year. If you failed the FEE, you’re required to take a CI-HW (writing-intensive) class first semester. Passing the FEE gets you out of the CI-HW part, leaving you free to take just a CI-H if you so desire. Getting a 5 on either AP English exam gets you the same as the FEE with 9 general elective credits.

Taking a CI-H isn’t necessary both terms, but you need to have completed at least one by the end of your first year. I took a theater class in the fall that wasn’t a CI-H, and it wasn’t a big deal – I missed out on being offered sophomore standing (which I wouldn’t have accepted anyway), but that’s a can of worms I won’t be opening here.

As a freshman, you have a 54-unit limit your first term, and a 57-unit limit second term. Your four main classes only comprise 48 units. Whatever could those extra units be for?

Tons of things, as you should already know – if the state of my inbox during the summer before freshman year was any indicator of that of yours, then you’ve already received multiple emails from twelve million different programs. If your plans don’t already have you doing things like saving the world via Mission 2011/Terrascope or learning the Super Sekrit Ways to Score Awesome Internships in F/ASIP, you can always take a really cool Advising Seminar. I took Chemistry and Art, which was a great class. (I can give you more details if you want them, but the class is no more – my freshman advisor left MIT in May.) You can also use the extra credits to take an intro class in your planned major, or – get this – you can do absolutely nothing with them. I took 48 units in the spring, and I’m glad I did – it gave me more time to get all of my work done, and I even got to sleep sometimes.

Want more information? (Can you even imagine there being more than this?) If you’re looking for further explanation of anything in particular, the first-year website has all of this and more!

49 responses to “I will, I will set this schedule on fire”