I wonder, twice, if I might have made a similar mistake.

DID YOU KNOW? The melody of Sir Andrew Lloyd Webber’s “I Don’t Know How To Love Him” is remarkably similar to that of the second movement of Mendelssohn’s violin concerto. When approached with this information, Sir Andrew remarked that it was amazing that two composers could come up with the exact same sequence of notes.

There is so much I wanted to do for IAP for no other reason than so I could blog to you about it, but the incredible wealth of activities on the IAP calendar with my busy schedule of turning turkeys into oil and blogging, I actually don’t have time to participate in every single IAP activity that strikes my fancy. It’s tragic, to say the least, but it just goes to show you how much there is to do during IAP.

One thing I did do is fry forty-six meatballs this weekend for the Mafia potluck. 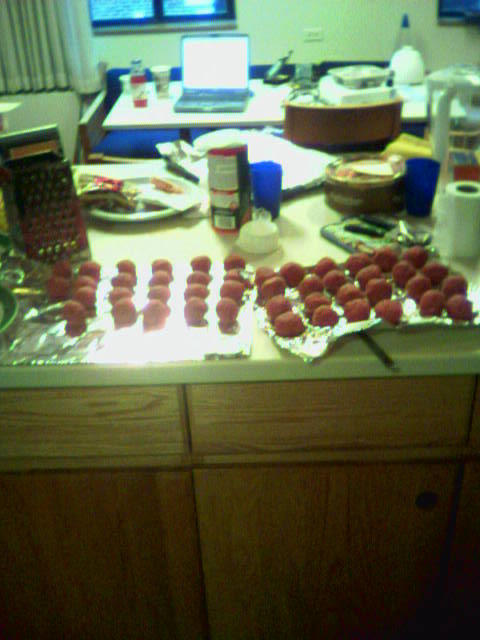 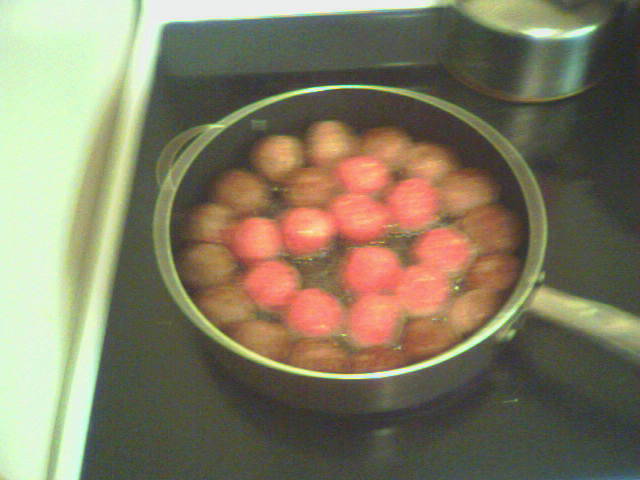 I asked you folks last entry whether I should make meatballs or potato-bean soup for the Mafia potluck at NH4, and Sam’s Mom settled the issue with this bit of logic: “I was going to tell you to make the soup because it sounds easier, but since it is a Mafia potluck, I guess the meatballs would be more appropriate.” So, an entire day of simmering sauce and 45 minutes of frying later, I had forty-six nigh-perfect meatballs to show for my work. I ended up with half of one at the end of the night, so I guess it was a jorb well done.

A pox on Jeremy and Javier for killing Laura and I (the two inspectors, no less) on their first turn as mafia.

Now here’s me blogging about some stuff that I didn’t do but that looked pretty cool.

At the marching band’s suggestion, I was actually working on a version of “We Are The Engineers” for this competition, but I got caught up in some of my other musical projects, and it turns out that the software for this isn’t so user friendly. Don’t tell H-Lounge I said that. Also, I wasn’t too interested in the prize of a VIP card to any of Boston’s clubs, and the otherwise exciting prospect of meeting U2’s the Edge was diminished somewhat by the inevitable social awkwardness of meeting him–I mean, his first name is technically “the,” right? How do I greet him? “Hey there, The!” “Hello, Mr. Edge!”

Ever wondered where to buy the best and most intersting chocolate. How you been wanting to go to Finale but have had no one to go with you. Come join your fellow chocolatiers in a guided tour of all the chocolate hot spots in Boston including Burdick’s, Cardullo’s, and La Fromaggio. Meet in Lobby 7 to join tour.

I was actually fully intending to go to this, but it was snowing and then I woke up and went to see Ariel later and she was like, “Oh, how was the chocolate thing?” and I was like “Good… oh, wait, I forgot to go! Dangit!” Just the concept of a chocolate tour of Boston seems pretty cool, although once again the excitement is diminished by the fact that I live a scant 20 minutes from Hershey, Pennsylvania–the so-called, “Sweetest Place on Earth.”

But tomorrow I will not forget to go to the MIT Integration Bee, and I will blog about that most mightily.

6 responses to “Seen and Not Seen”