While I was out, the world changed. (UPDATED)

DID YOU KNOW? The chocolate chip cookie was invented in Massachusetts by Ruth Graves Wakefield in 1937. She was working at the Toll House Inn when she ran out of unsweetened bakers’ chocolate, so she chopped up some semisweet chocolate and tossed it into her chocolate cookie recipe.

I had a lot of things I was going to blog about.

I was going to blog about all the stuff that happened while I was home, except that not much really happened, except this great road trip I took to Elizabethtown College with Chris ’09 to see Alaina E’09 and Allison E’07. Despite getting lost AGAIN (Google Maps, you’re on my enemies list), I had a spectacular time getting lost under the canopy of Allison’s bed and checking out food options at The Jay with Alaina. Thanks guys!

So I thought maybe I could display my continuing obsession with Food Network by recounting some of the best and worst moments I saw. For example, there was the “delicious and healthy” Rachael Ray meal that consisted of a chicken hamburger topped with chorizo and shrimp, and then crispy fries rolled in melted butter and dipped in mayonnaise. On maybe when Sandra Lee quickly estimated that you could probably get “20 or 24 1-ounce burgers” out of a pound of ground beef, or suggested that you put powdered sugar on rice noodles and serve them as an “Asian funnel cake.” But I didn’t have any screengrabs or anything. so…

Then I thought maybe I could write an April Fools’ entry, like, I don’t know, CPW getting cancelled or something, but then I remembered the time that Harrisburg radio legend Ron Drake said there was a submarine sighting in the Susquehanna River and people in Harrisburg went down to check it out. While I certainly don’t wield that much influence, I decided that it would be best not to chance it, even with a concurrent entry by Ben.

I then remembered the best April Fool’s joke that I ever had a hand in playing, which was my senior year in high school when the entire class (all 9 of us) our AP Chem teacher, Mr. Richard Richard Sweger, by conspiring to drop it on April 1st. Despite the fact that half of us burst into laughter when we took the drop forms to him, and that we arrived to class 20 minutes late with a sheet cake decorated with a reaction prediction quiz, Mr. Sweger took incredible offense and didn’t realize anything was up until the inevitable cry of “April Fools!” That’s dedication to teaching.

But then I got back to South Station and found the perfect thing to blog about.

So last Saturday, when I was leaving on the T at 5:30 AM, I made sure to buy two $1.25 tokens. When I arrived home after my long and peril-filled journey, I took the second token out of my pocket and set it most intently on my desk, where it sat in solitude for three weeks. I then, right before departing for Boston, picked it up off my desk and stuck it into my pocket. Not wanting to face the usual crowd coming off the train in South Station, I took the token out of my pocket at the Back Bay stop, in preparation for entering the Red Line back home.

You can tell that I go to MIT here, right?

So, with eight-day-old predestined T token in hand, I rushed off the train, knocked over anybody who got in my way, forsook the escalator bunching for the stairs, and made a mad dash for the gates, only to find… 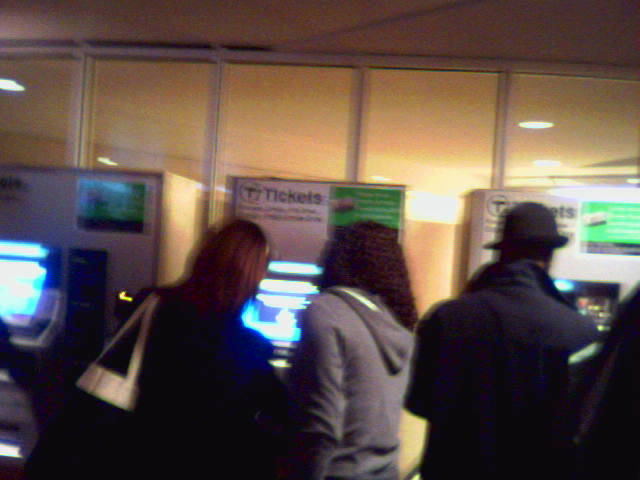 …that all the gates at South Station, which had previously accepted tokens, now only accepted Charlie Tickets. 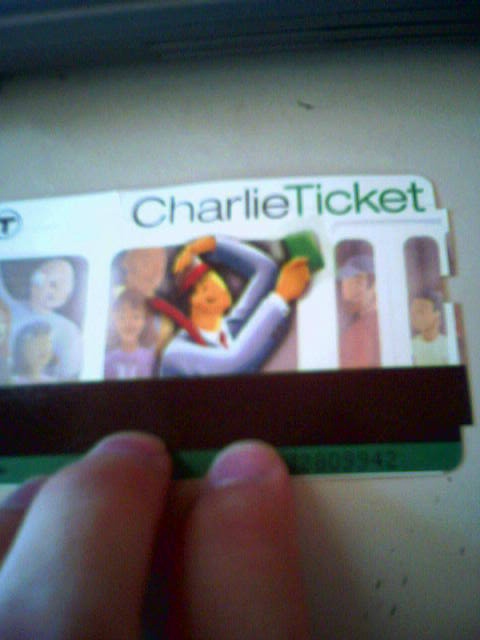 “What is this, An April Fool’s Joke?” I asked myself. Although MIT hackers are often quite ambitious, I’ve heard that off-campus hacking is pretty difficult, and even with an entire spring break it would probably be hard to implement a fully functioning T-ticket system at South Station anyway without anybody noticing. I then recalled that I had heard about this system before, and that the South Station stop had been mysteriously closed when I left for Harrisburg, I concluded that perhaps the future had come sooner than I expected.

SUBWAY TICKETS ARE SO STUPID.

Even the crazy, futuristic swinging doors could not placate my anger, because the gates were now too narrow to comfortably fit my bag between them. Also, I now have to find away to use all the extra T tokens that I have accumulated before Charlie Ticket comes to a station near me.

6 responses to “Since U Been Gone”