There's six lessons (and a recipe) somewhere in there.

Sunday afternoon catches me cooking for 30+ in a hot frantic kitchen where the concentrated afternoon heat fringes on vile. Might I mention that my cooking partner, Danny, is flamingly vegan in the friendliest sense of the phrase. His trip to Whole Foods ended with a miniature avalanche of lentils, peppers, onions, brown rice, fat pungent mushrooms, like a million thimble-sized cans of tomato paste, tempeh, wheat buns, six chipotle peppers, pita bread, and yuppieish bottles of marinades, agave syrup, organic molasses, and cider vinegar messily cluttered over the counter. Tonight’s dinner will feature an ambitious BBQ-themed menu complemented by a spasm of last-minute surprises: stir, simmer, serve. Stage 1: chopped onions mutiny and leap overboard. Stage 2: an aborted experiment in homemade black bean burgers is sublimated into a thick savory stew. Stage 3: minutes before serving, an entire pan of baked pesto tofu is briskly upended onto the neat red tile floor, during which Jon accidentally grills the terriyaki-glazed pineapple sans aluminum foil and then deliberately grills a pretty slab of locally-raised maple-cured ham that turns out to be invisible until right after everyone leaves the dinner table.

Mishaps aside, the inaugural mouthful of thick wild mushroom gravy slathered over honey walnut bread, chased by burgers under smothering spoonfuls of spicy homemade organic-molasses-and-agave chipotle BBQ sauce, injected a bloom of forgiveness into stomach and heart embittered by 2.5 hours of peeling/chopping/boiling/blending/grilling/saucing/baking/cleaning/scouring/sweating. Forks swoon and groan under pilings of rice-and-lentil burgers, mushroom gravy, grilled pineapple slices, bratwurst, hamburgers, Whole Foods-brand wheat buns, pita bread, black bean stew, teriyaki baked tofu, and musky-sweet BBQ sauce that makes me want to weep honeyed, tangy tears of the same sauce, because it would frankly be the most delicious act of weeping ever. Night drops like a blanket, and I am suffused with sticky satisfying exhaustion.

Not that I’d ever do it again.

College is a breeding ground for weirdly poignant relationships with food. A friend of mine ate nothing but bread and cereal for a week. I once ate seven bowls of cereal in one day. I’ve also eaten cereal that my roommate claimed off of MIT’s reuse mailing list at 2 AM one night. One of the GRT’s in Random Hall bought a small nation’s GDP-worth of cereal at Star Market once because it was on sale. He is currently undergoing an emotional separation from boxes of expired Life*.

*A lucid metaphor for the fate of the average stuck-in-grad-school grad student, as it so happens.

I’ve come to believe that the gentle predictability of cereal, the ubiquitous crunch and murmured tingle of glucose, fulfills the freshman’s unspoken need for comfort, stasis, eternal breakfast. Same with bananas, with their blond sweetness and 69 cents-per-pound price tag at your nearest grocery store. Cereal and bananas are basically the only things you can depend on on when the sight of your daily itinerary inspires schizophrenia. Which is why it’s so heartbreaking when your banana peel won’t open the right way.

One night, I walked outside onto Massachusetts Avenue and got hijacked into a city-wide dance party on the busiest street in Cambridge- i.e., a glowstick-festooned mass of 800+ tax-paying citizens pulsating unhygenically to the throbbing ear-stabbing beats of 80’s disco and soul. Because this was thriller, thriller night, and no one’s going to save me from the Mass. Ave. Dance Party about to strike, I caved in and joined, barely pausing to appreciate the florally-patterned light displays and the centrifugal skillz of the nocturnal neon-studded hula hoopers. 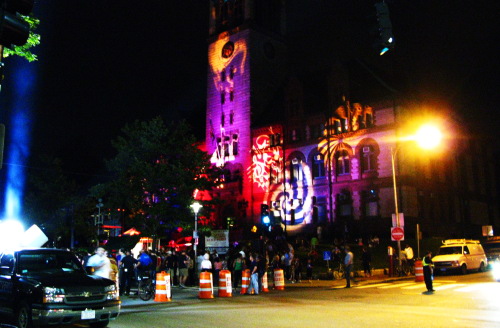 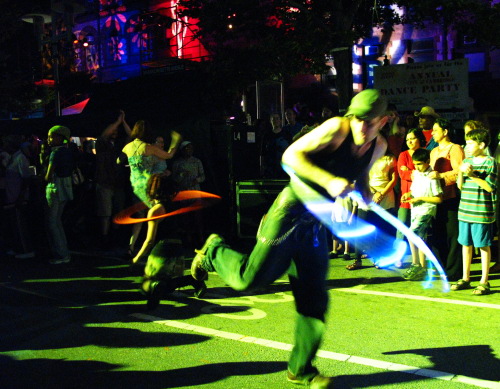 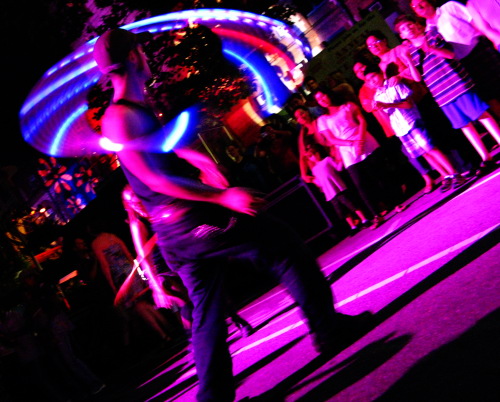 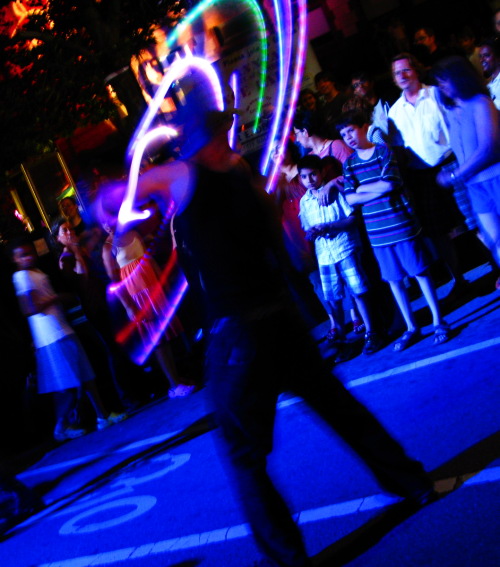 I tripped home, amputated a pineapple, and devoured a slice of bright tart fruit doused in plenty of balsamic vinegar and heaping mounds of cayenne powder. It felt more like getting punched in the face by a pineapple, but nonetheless I dug the fork deep into the tender yellow flesh and let the pineapple have its revenge on my face. 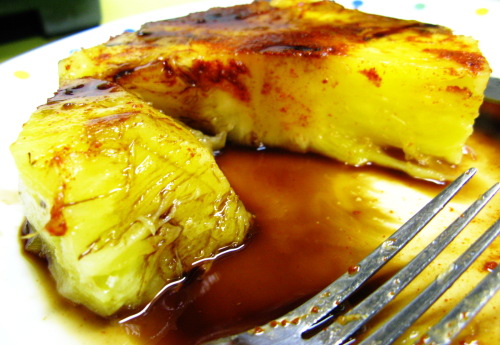 90% of the food consumed in college does not come packaged with social constraints. Matt Ritter’s favorite snack involves spaghetti-o’s, lemon juice, fruit loops, an ice cream sandwich, and two slices of high-quality whole-wheat bread. Just imagine the most natural way to eat all of the above in one bite, and you will have recreated Matt Ritter’s unpatentable recipe. On ordinary days, Matt Ritter favors quieter tastes, such as that of a banana omelette cooked in a high-power microwave (open a tortilla, slice bananas over it, crack two eggs over the whole mess, pop into microwave, serve with an immensity of peanut butter). Matt Ritter also pours cereal on everything, including chili beans.

Last weekend, a menu plastered in the dingy-cornered window of Thailand Cafe hooked my eye. In past experience, Thailand Cafe has served weak curries infused with the chef’s secret blend of regret and stunning blandness. Thailand Cafe is somewhat redeemed by the fact that it is cheap, usually empty, and all of ten feet away from Random Hall and less than ten minutes’ walking distance away from most of MIT. Some people appear to enjoy Thailand Cafe; other people understand the pleasure of eating food that contains nonzero amounts of seasoning.

Yet the idealist buried inside my contemptuous, hard-shell gourmand fantasizes that maybe, just maybe, Thailand Cafe’s crappiness hides a brilliant chef trapped in a cocoon of terrible menu decisions, forever catering to an audience whose tastes are slightly more sophisticated than those of a pogo stick. Pin this as my excuse for barging inside one morning, asking the waitress for the semi-secret Sichuan menu (the chef and waitstaff are all Chinese, by the way), and ordering a lineup of dishes straight from the obscenest dreams of a passive-aggressive vegetarian Buddhist.

I started with cold beef tripe and tongue, bathed in chili oil and garnished with chopped peanuts. The thin, flaking slices alternated between meltingly tender and softly chewy as only intestines can be, but they conspicuously lacked the bone-shattering crunch of tendon that usually makes this dish so texturally addictive. Not bad, could use a few more generous shots of capsaicin. 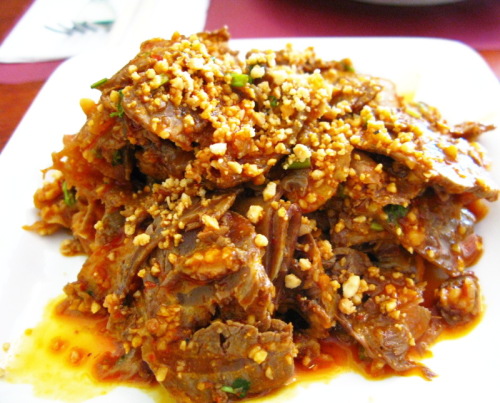 Next came a bed of velvety, salty curls of smoked pork belly, thickly streaked with iridescent milky-white fat, an indulgent contrast to the sleek silky sheaths of leek in company. Well-played. 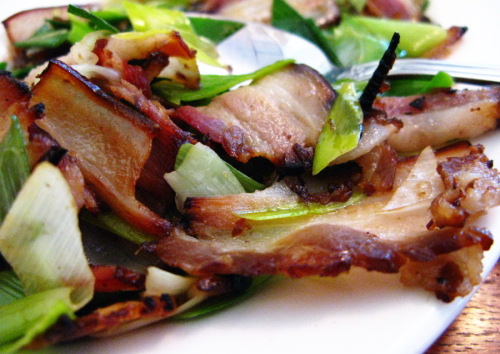 Finally, braised beef was drop-dead gorgeous in a feisty dress of cumin, cilantro, and Sichuan pepper. Trying to relive a bite of sizzling meat juice bursting through a crust of hot spices endangers the propriety of language, so I’ll stop here. 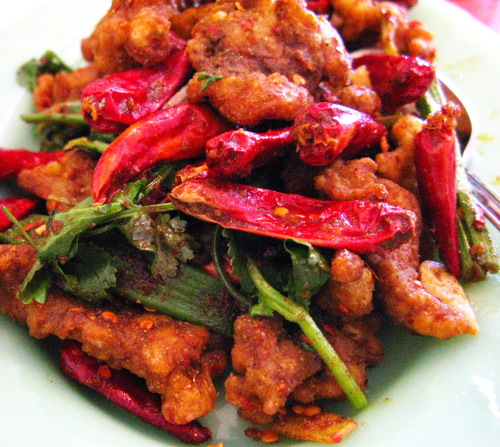 Slowly, my heart is gasping out room to forgive Thailand Cafe for their unspeakable red curry combo. 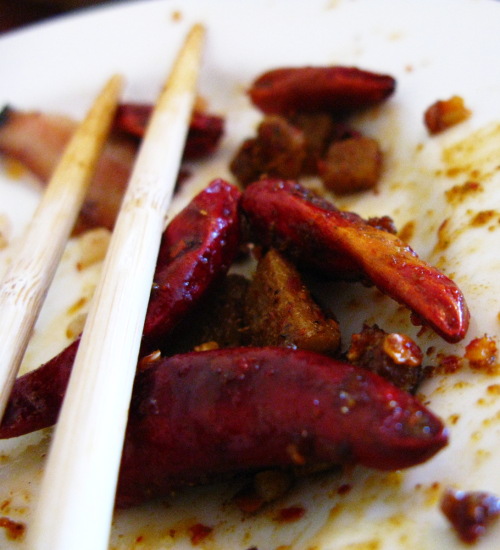 VI. Poem about Wild Raspberries by a Jeep 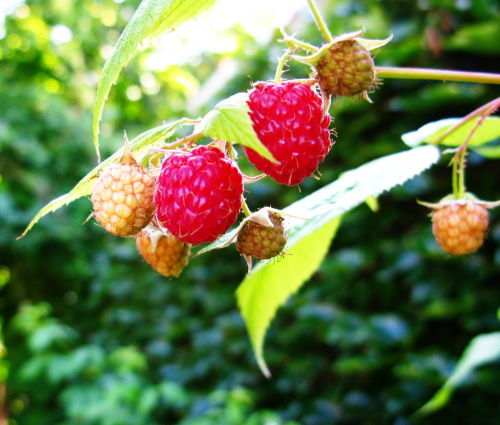 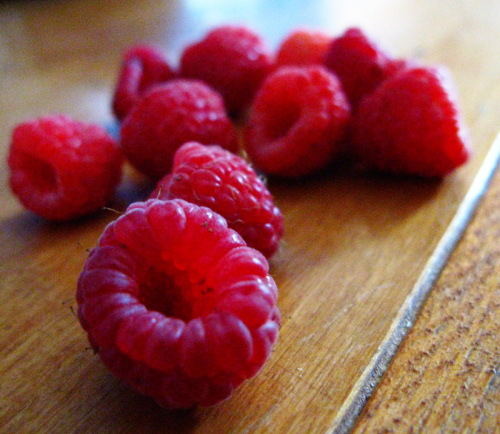 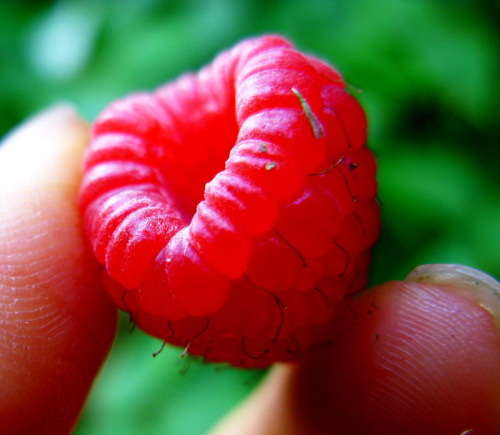