Some Megaphone, Pressed Against An Insect’s Brain by Sam M. '07

That is what this blog entry resembles.

I have taken a cue from fellow blogger Lulu and changed my name to Samsam Siam. No no, I’ve actually just taken all the spare pictures from last month that I had meant to blog and assembled them together into one photo entry so I can move on with my blogging life (and believe me, this time I’m really gonna move it!). My pictures aren’t quite as good as Lulu’s, but American Idol is on and Nicole Tranquillo seriously looks like she’s having a heart attack right now, so I’m too distraught to fix them at all. 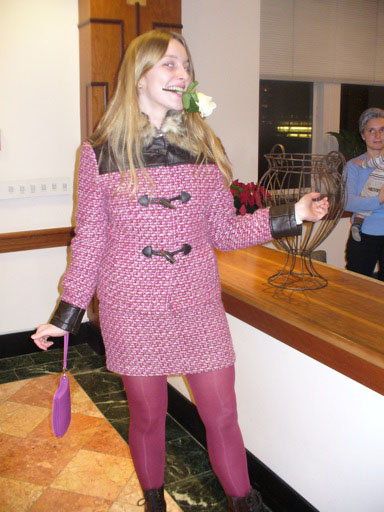 This is Lauren, who was incredibly pink at the extraordinary holiday dinner party for Course 17: Political Science. Look, MIT has not only girls, but also a political science department. Before your mind even goes there, Lauren is NOT EVEN a political science major–she’s just a minor! My own connection to political science is even more tenuous (I was pretending to be Ruth’s date and she’s a minor) but that didn’t stop me from eating like 47 free peking duck spring rolls.

I also took some pictures of my own outfit at the dinner, but I decided that posting them here would be a little gratuitous. Suffice to say that I think purple, red, green, and gold is a perfectly valid color combination. 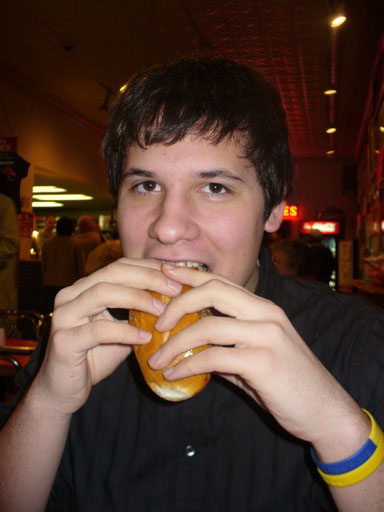 This person is MIT ’10 and he came down from Hazleton, PA to visit me in Harrisburg over winter break, which is the second time that something like that has happened. Like Moria ’06 and Friends before him, I managed to get him hopelessly lost within like 20 minutes of my house. Also he untags pictures of himself on facebook in which he thinks he looks bad, so he’d probably have to crash the MIT admissions server if I named him here. 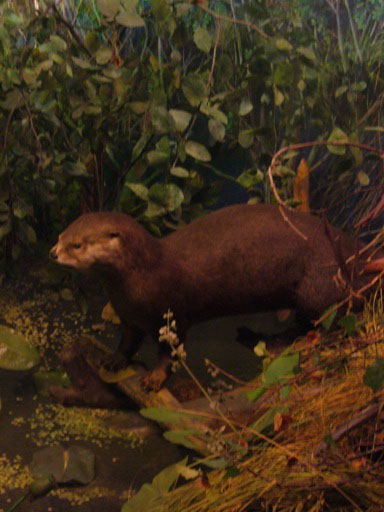 After getting some reasonably-priced Harrisburg cheesesteak, we checked out the State Museum of Pennsylvania, where we saw this proud beaver preserved through the miracle of taxidermy (or maybe it’s just a fake model; I’m not too sure really). Of course, I had to take its picture. 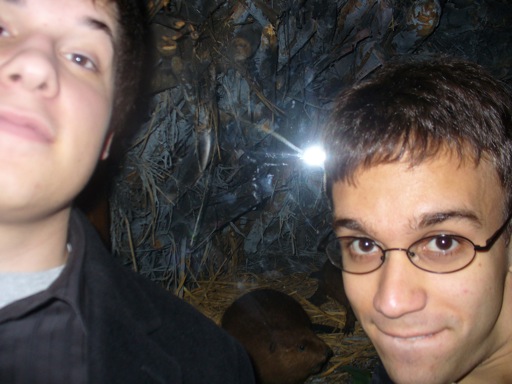 Here is the same beaver hiding in its dark underground beaver hole. He must be a Course 10 major using Aspen to finish his problem set in the basement of Building 66,

After seeing Dreamgirls later that afternoon, nothing happened to me for like two weeks. Oh, except I saw this Futurama clip and laughed for like three or four days straight.

But then I got to go to the Pennsylvania Farm Show, the world’s largest indoor agricultural exhibition, which takes place a 5-minute drive away from my house. Have you ever noticed that, according to this blog, everything cool in the entire world happens within a 30 minute radius of me? 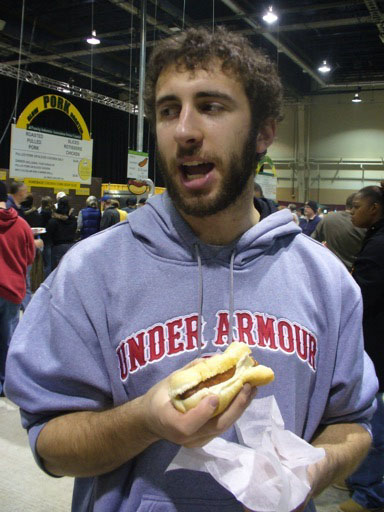 Probably the most awesome thing about the farm show is the greasy food peddled by friendly mennonites. My high school friend Ben thinks that the point of the farm show is to consume as much food as possible within 5 minutes without throwing up. As you can see above, to achieve this end he does not close his gaping maw even for one second while in the food court. 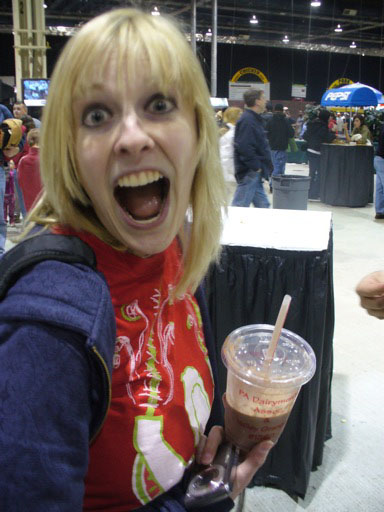 Seriously though, the milkshakes will make you feel like my high school friend Allison. 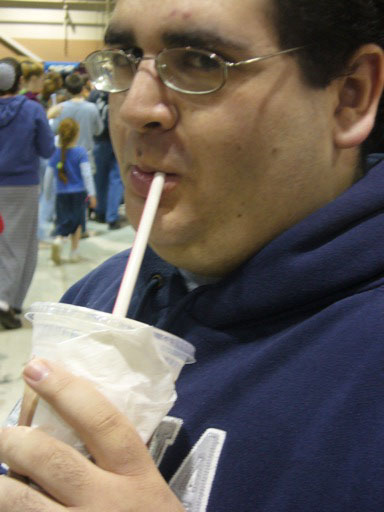 Not like my high school friend Michael J here, who is not excited by most things, except the band Gogol Bordello. 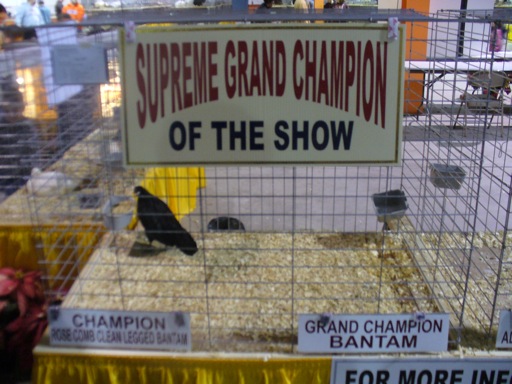 Of course, most farmshowgoers think that THE SUPREME GRAND CHAMPION is the coolest thing there. Personally, I like the champion Asiatic chicken better… 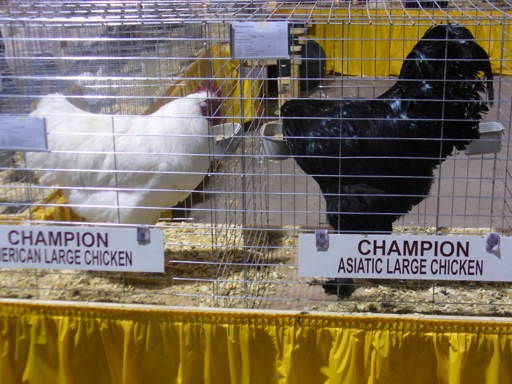 …but then again I am drawn to shiny and colorful things, like a hungry ostrich. 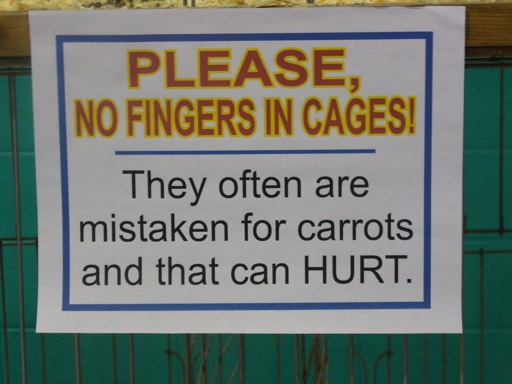 Actually, you ought to watch out for the champion Asiatic chicken. 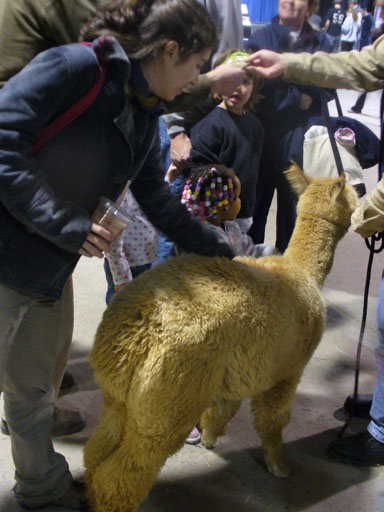 How about an alpaca? Here my beloved high school friend Shana, the supreme grand champion of my heart, pets this adorable little booger. 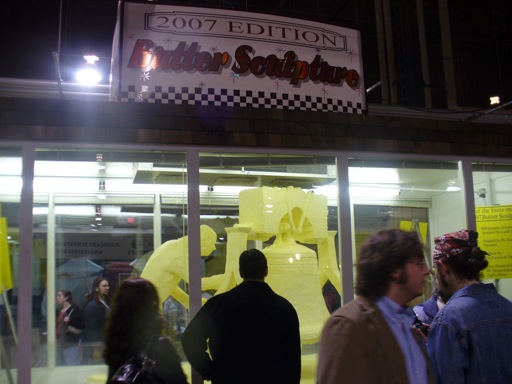 And here’s this year’s model of the famous farm show butter sculpture! BUTTER. This year it was Benjamin Franklin inspecting the Liberty Bell. And as a supreme grand champion of the environment myself… 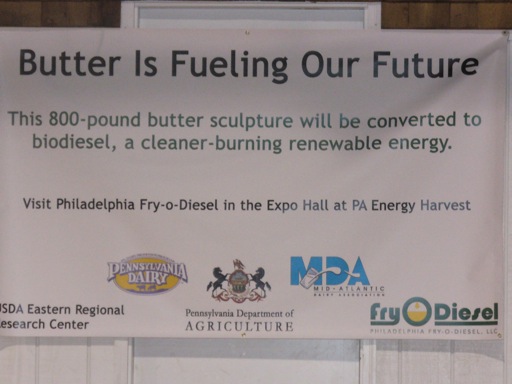 …I was excited to find that this year’s entire butter sculpture is being converted into biodiesel for consumption in Pennsylvania farm equipment! DID YOU KNOW? that [email protected], a new club or, uh, something started by my friend Joe ’08 (maybe my ex-friend after that description) is now one of the Top 10 finalists in a national contest sponsored by GE and MTVU?

17 responses to “Some Megaphone, Pressed Against An Insect’s Brain”