Someone saved my life tonight by Sam M. '07

DID YOU KNOW? In Burton-Conner, if you keep leaving your suite messy week after week, the cleaning staff will eventually get tired and stop cleaning them.

Frozen grapes are really delicious, and keep basically forever. Try it next time you have some red grapes sitting around.

I have seven favorite words in the English language. In order, they are:

So boy, was I excited when we were sitting around the table the other day and Zach ’08 arbitrary declared, “Meara [’09], you live in squalor.” My heart beat a little bit faster as everyone else around dissolved into laughter describing how Meara actually lived not just in squalor, but Second Degree Squalor. Most times when people laugh I assume they are laughing at me, so I asked them what the heck Second Degree Squalor was, and why it was so funny. Zach gladly obliged and showed me a website which not only devised a method of quantifying squalor, but strove to help “chronically messy” individuals around the work survive their squalor.

So, for your edification…

First degree squalor: You are getting behind in tasks that you would normally manage, like laundry and dishes. You are not the tidy person you once were. Little piles are starting to emerge and your disorganization is starting to affect your life and inconvenience you. Things are just starting to get out of hand and become unmanageable. A sign of first degree squalor could be that you might be embarrassed for other people to see your mess…but you would still let them in the house.

Second degree squalor: Now things are really starting to get out of hand. Signs that you have reached second degree would include losing the use of normal household items like your bed, table, television or telephone, because the piles have expanded to cover the items up. You start to develop new methods of moving around your house, as normal movement is impeded by your piles of stuff. You might start making excuses to discourage people from entering your house.

Third degree squalor: At this stage, you have all the above, plus you have rotting food and animal faeces in the house, in the house, and this is the rule not the exception. You cannot cope with the growing mess. Essential household repairs may not be done, because you are too afraid to let a tradesperson see your house. Just the thought of someone seeing your mess causes you great stress.

And there is also a fourth degree, but, well, there’s no reason for me to be such a huge downer all the time. Meara, of course,is nowhere near second class squalor, although her lifestyle is a little bit interesting nonetheless, which is a story for another day.

Anyway, armed with this knowledge I went back and looked at my yet-to-be-unpacked room, where I had come up with the great idea that unpacking everything I owned would motivate me to put it away so that I would have, you know, a floor to walk on, a desk to use, and a bed to sleep on. 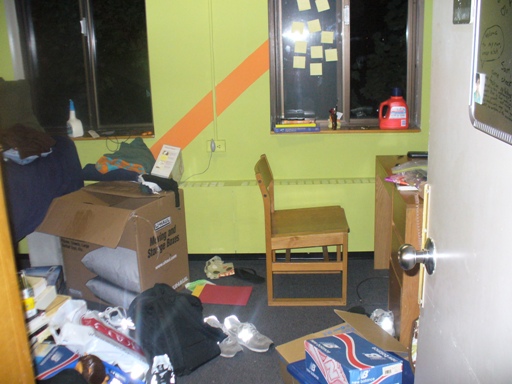 No such luck. Taking junk off of my bed at night and throwing it on the floor is nothing more than a slight inconvenience and a mild risk of sprained ankle. But then I went back and checked out that squalor website again, and I noticed that at second class squalor, you start to develop new methods of moving around your house, as normal movement is impeded by your piles of stuff. You might start making excuses to discourage people from entering your house.. Hmm. Doing some quick interpolation, I decided that my room was currently in a state of 1.2 class squalor. That warning was all I needed to scare me into unpacking my room, and I write you this entry looking at a full shelf of textbooks and only moments away from running across the floor and leaping into my already-made bed.

Thanks Zach. That was a close one!

2 responses to “Someone saved my life tonight”