I was going to title this entry "Spectacle of Light," because I mention MIThenge. Then I thought "No, that's too corny." Then I realized that I didn't have any better ideas, and the word "spectacle" is cool. I think.

The other day I realized that I’m always bragging about the one time a month that I get my act together and cook real food for myself, even if it comes from a box or consists only of taco meat and cheddar cheese. I don’t want you guys to go getting the wrong impression about me (like that I’m good at this kind of thing or something) or the amount of free time the average MIT student has (ha), so I decided to be like that guy Sam talked about because he won an Ig Nobel and photograph my food for a whole day. 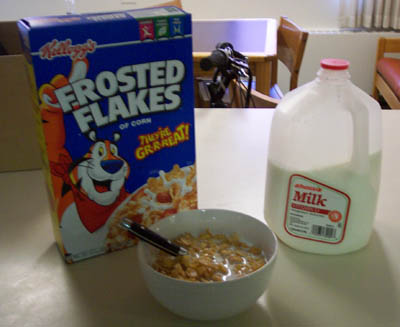 I love Frosted Flakes. Really I do. 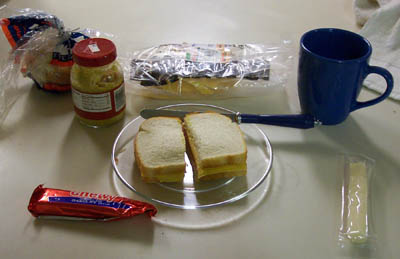 Salami and cheese sandwhiches have been the staple of my lunch routine for the past 7 years, and I’m not about to stop now. (Although sometimes I go crazy and have tuna fish instead!) 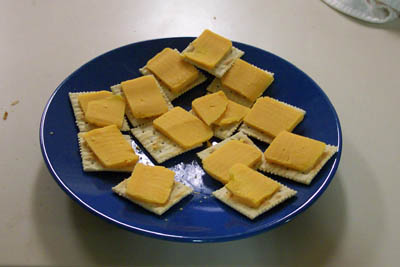 I mentioned before that one of the hardest things about my eating schedule is trying to fit it in with playing sports. You obviously want to have some fuel to work off of during practices and games, but you don’t want to eat a huge meal right beforehand. I usually end up having a small snack about an hour before exercise. This plate of cheese and crackers got me through weight training on Monday afternoon. 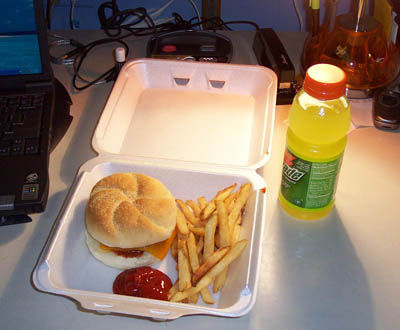 I suppose you could argue with me here, but I don’t really count grilled sandwiches from Alpine in the student center as dining hall food. These sandwiches are pretty good. And they come with fries! How can you go wrong?

I love all kinds of hockey, and I know what it’s like to be the neglected athlete when no one shows up to sporting events (ahem), so when my friend Sam ’09 said she was going to go watch the MIT Women’s Ice Hockey game, I decided to come along. Unfortunately, the Engineers lost the game, but I did get to snap some cool pictures! 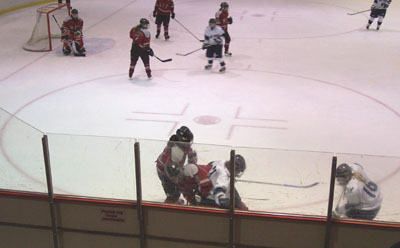 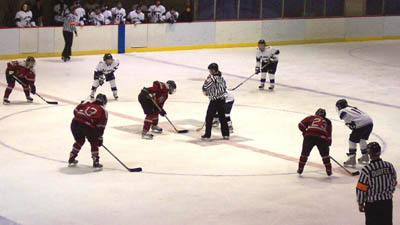 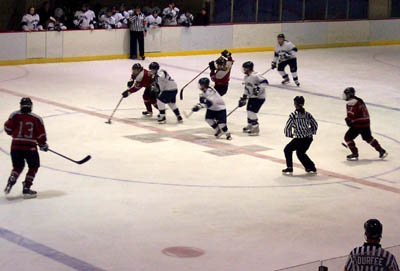 I left the game early to go check out MIThenge. How did I know about MIThenge? My illustrious floor chair, Sam, of course. Sam emailed the floor notifying us of the time and letting us know that he’d be down at the end of the 3rd floor of building 8, so I met up with him there. His first words (after, “hey, Laura”) were “I’m blogging this first!” And so he did. Which is fine because, as he mentioned, there were lots of dumb people getting in the way, so I didn’t really get any good pictures. 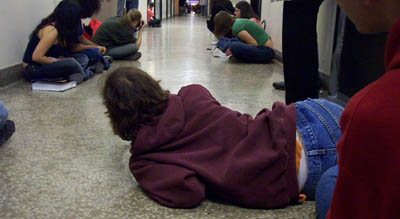 I figured if Sam was covering the actual event, I might as well try to take a different angle on it (i.e. Sam taking pictures of said event). =)

I did get one picture that came out nicely. I took this about 10 minutes before the actual “perfect” alignment, so it doesn’t represent the full scale, but it still looks pretty cool. Enjoy. =) 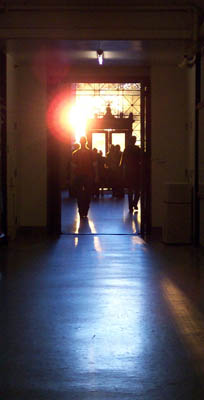