"Round of applause for the man in stilettos! I can only run like that when I'm being chased!" And she's talking about an MIT '08.

Let’s start this one with a picture. 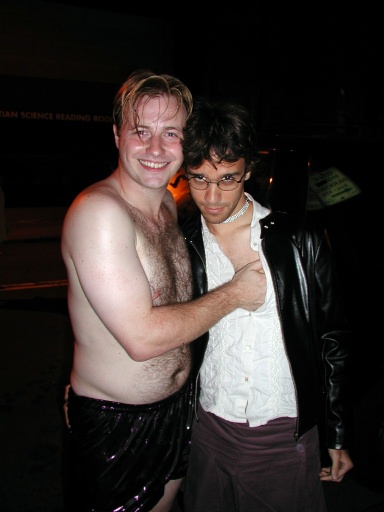 So, we went to see the weekly midnight showing of The Rocky Horror Picture Show at the Loew’s in Harvard Square.

That’s me with Rocky Horror.

Uh, read at your own risk.

Okay, first of all, the T only runs until about 12:30, so without any way of getting back from Harvard Square, we decided it’d be best to bike. But it’s usually not best to bike wearing this: 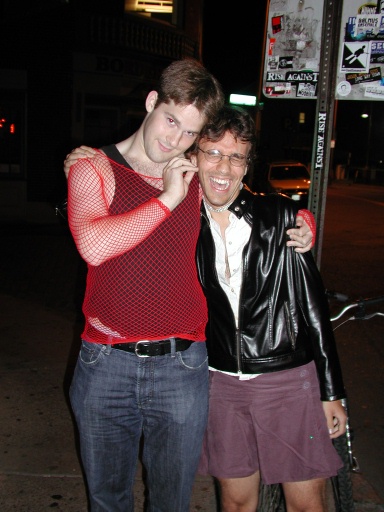 So yeah, luckily the wind was was against us so my miniskirt didn’t flare up too much in the front, though everything below my waist was just a little bit nippy.

But actually, I don’t think I had the worst biking attire: 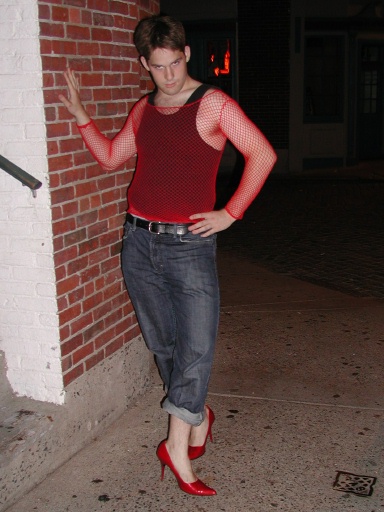 Matt ’08 almost tore the side mirror off of somebody’s car on the way down. Still, he was determined to get to Harvard in those 4-inch bright red heels or not to get there at all. 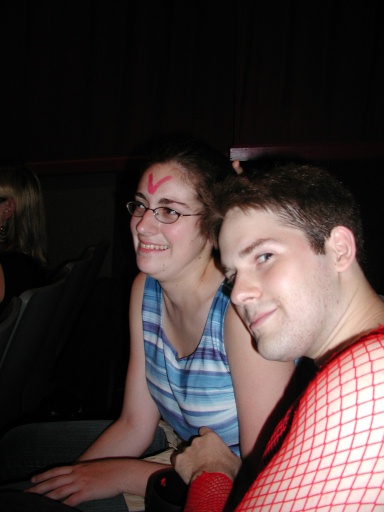 As the scarlet V of lipstick on her forehead symbolizes, Ruth was a Rocky Horror virgin–that is, she’d never seen a live production before. This was her idea. You can see her regretting her decision above. From her expression, why don’t you try to imagine what was onstage? Luckily, Matt was ready to show her the ropes before too long. Prior to the show, the cast brings some virgins to the front of the theater and has them engage in a ceremony that, uh, can’t be printed here.

Ruth was not part of the ceremony, calm down.

I don’t want to give too much away because this is really something very special that you ought to do if you can get up to Boston on a Saturday night. Basically, the company gives an integrated multimedia presentation, with equal parts film, live theater, and discussion group. We were joined in the audience by many others in similar attire to mine, as well as a stormtrooper, a ninja, and an 8-year-old girl with her horrible, irresponsible parents.

Some memorable (yet clean) quotes:

“Round of applause for the man in stilettos! I can only run like that when I’m being chased!” –a security officer, as Matt hurried over to buy our tickets

“There’s no crime in giving yourself over to pleasure!” –Frank, to Brad (in the film)
“There is in Maine! But not in Massachusetts, thank God!” –audience reply

I think that’s about all the quotes that I can relate here.

Uh, and you better send me an e-mail if you want to know what happened to me during “Sword of Damocles.” That’s definitely not printable.