Systems and Light by ARTalk

[by Miren Bamforth '15] Even MIT's art scene is a little nerdy.

On behalf of the four other freshmen and two other ARTalk bloggers in 21M.A12 (Arts at MIT), I would like to state something: our advising seminar might be one of the coolest classes ever.

Each week we spend the first hour or so of class learning about different facets of art here at MIT, followed by some casual chitchat about how classes and activities are going. Some of our most recent artistic endeavors have included sitting in on Senior Lecturer Anna Kohler’s Acting with the Camera (21M.624) class and taking a tour of MIT’s public art collection. This week, we went to the MIT List Visual Arts Center to see Otto Piene’s Litchballett and the Hans Haacke 1967 exhibit.

We went to Litchballett (literally, ‘light ballet’ in German) first. The exhibit is in a completely dark room except for the moving and flickering light coming from the pieces themselves. Originally, music composed by the artist accompanied the patterns of light, but this exhibit is silent. As soon as you step inside, you see this glowing ball of lights called Electric Rose.

The 171 light bulbs–which are all orange except for one– glow in a certain sequence: the singular purple bulb first, then the upper hemisphere, then the lower hemisphere, then all of them. The calm, hypnotizing pattern of the switching colors draws onlookers into the piece. I found myself staring intently at the soft light for a while, even though, after a few cycles, I knew which phase of the sequence would be coming next. For a piece of machinery that is very different from stereotypical contemporary art (i.e. a painting hanging on a museum wall), it was quite beautiful. But let’s move on.

Inside the main room of the exhibit, there are half a dozen or so pieces. Inside each piece are different light bulbs which light up at different times to make myriad moving patterns on the walls. Hence, the Light Ballet is created.

Like this, but the patterns are moving. Photo Credit: RP-Online.de

My favorite pieces were the cube pictured above and these neat concentric circles of dots in the wall. Multiple light bulbs rotated behind the circular pattern to create this piece of the ballet. We weren’t allowed to take photos, so besides the above Google images I have nothing to show you guys. However, this gives you even more incentive to check out the exhibit and see Lichtballett for yourself! It runs from October 21st to December 31st of this year.

The other exhibit that List is currently showing is entitled Hans Haacke 1967 because it is a recreation of an art show that Hans Haacke held at MIT in 1967. To quote the little booklet that I picked up at List:

Haacke rejects the name ‘sculpture’ for his works. He calls them ‘systems’ …Haacke deliberately designs his ‘systems’ to “evolve in time and be affected by time. Changes are desired and are part of the program.”

Because of Haacke’s interest in systems, his creates art which captures these systems by containing or framing them in little bundles. One of his pieces, Condensation Cube, is comprised of water and condensation inside of a plexiglass cube. Here, Haacke captures the natural system of water which self regulates; it changes from droplets to condensation inside the cube based on the heat in the room. So, in a way, the viewer does interact with the exhibit since they input extra heat into the system, but the water self regulates on its own.

Pretty much all of the exhibit has to do with the ways in which forces of nature are systems. The pieces are mostly comprised of wind, water, and grass.

This is how the exhibit looked in 1967. Photo Credit: listart.mit.edu

Since the current exhibit is based off of the original exhibit, Hans Haacke 1967 looks quite similar to the above photo. The balloon hovering in the foreground of the photo is still there, as is the moving sheet and the ice pillar in the background. Once again, go to the exhibit to see for yourself! (It also runs from October 21st to December 31st.)

Throughout his career, Haacke’s theory of systems developed from those of natural systems to political systems and social systems. For example, he has a piece in the Reichstag building in Germany which was restored in the 90s once the Berlin Wall came down. The MIT exhibit does focus primarily on his earlier work, so I would recommend looking up some of his more recent pieces if you interested in finding out about the other types of systems.

The final part of the exhibit is a separate room where some photos of Haacke’s work are hung. Some of the pictures are of work that Haacke did at his studio, but there are also pictures of the ruckus he caused on campus back in 1967. Haacke decided that he would do a line drawing in the sky with a bunch of balloons. 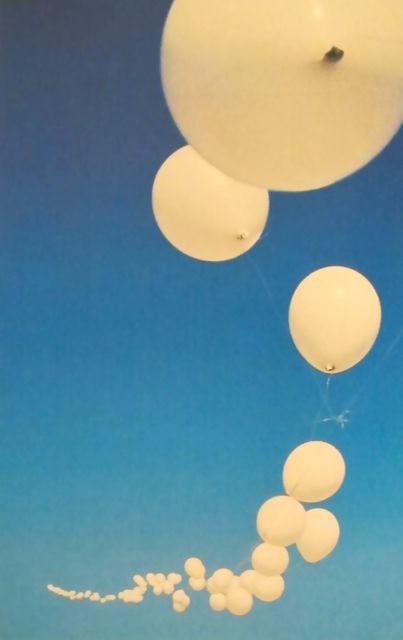 Release all of the balloons!!! Photo: mondoblogo.com

This picture is from a line drawing with balloons that Haacke did in Central Park in NYC in 1967 (the same year he did it at MIT). It is called “Sky Line.” Essentially, the MIT version of this consisted of releasing a lot of balloons from the roofs of the main campus buildings. There is an extraordinary picture in the List gallery which shows the balloons slowly rising above the Great Dome on a particularly clear day. I don’t know how much Haacke knew about MIT culture, but it is almost as if he pulled off his own artistic hack from the rooftops. Good job, Haacke!

Also, Haacke has a sense of humor. Some of the photos in the gallery are purposely hung askew. This makes the OCD part of me scream a little bit inside, but Haacke is just messing with all the precise MIT engineers who are going to come and see his exhibit and feel the need to tilt his pictures back into place. Boy, it was bothersome…but it was still funny to see all of the other people in the room squirm a little about it as well.

This concludes installment #2 of The Cool Things 21M.A12 Does. Good luck to all you EA applicants! I was in your position a year ago, and I found that it was best not to let the college process take over your life. Remember to spend time with your friends (or maybe looking at some art? [/shameless ARTalk plug]) so that you aren’t too stressed out. And, if your path happens to lead you to MIT next year, consider taking Arts at MIT!

8 responses to “Systems and Light”