World of Wires by ARTalk

[by Emily '15] Are you living in a computer simulation?

First of all, I need to second Miren’s statement a while back about 21M.A12: Freshman Arts Seminar Advising Program (or FASAP, or Arts at MIT. It also may be the class with the most names ever!) being the best class ever.

All the way back in September, we talked about a play called World of Wires by MIT Associate Professor in Theater Arts, Jay Scheib. One of our FASAP advisors, Sara Brown, was the set designer, and I ended up being in the cast myself, so I couldn’t resist writing about the show.

World of Wires is such an intriguing show. I did a fair amount of theater in high school, but I had no idea what to expect when I got here. Sara had mentioned the play in class our first week, and I saw an email encouraging freshmen to audition, so I showed up on a whim, not knowing what to expect. We ended up throwing together a workshop of the show in less than 2 weeks with a cast of six people; in other words, the shortest rehearsal period I’ve ever had for a show. It was also one of the most fun shows I’ve ever been part of.

Not surprisingly, Jay describes the plot much better than I could:

“World of Wires chronicles the development of an immense computer simulation that’s so life-like that it’s nearly indistinguishable from reality. When one of the scientists who authored the simulation goes missing, Fred Stiller begins to investigate. As the investigation spirals out of control he discovers that he is, himself, part of the very simulation he thought he’d been hired to design, and his colleague(s) had simply been deleted. Based on Fassbinder’s early precursor to films like The Matrix and Tron, World of Wires offers stiff critique of both the genius and the fallibility of virtual simulations—in a world which, as Baudrillard suggested, regularly migrates simulations into reality, and vice versa. World of Wires is an all-best-are-off-joyride into the startling possibility that you might actually Really be one’s and zeroes in someone else’s immaculately programmed world.”

Unnerving, no? Jay and Sara played around with the idea of simulation with how the show was staged. The stage was split roughly in half with a long hallway with open side windows. 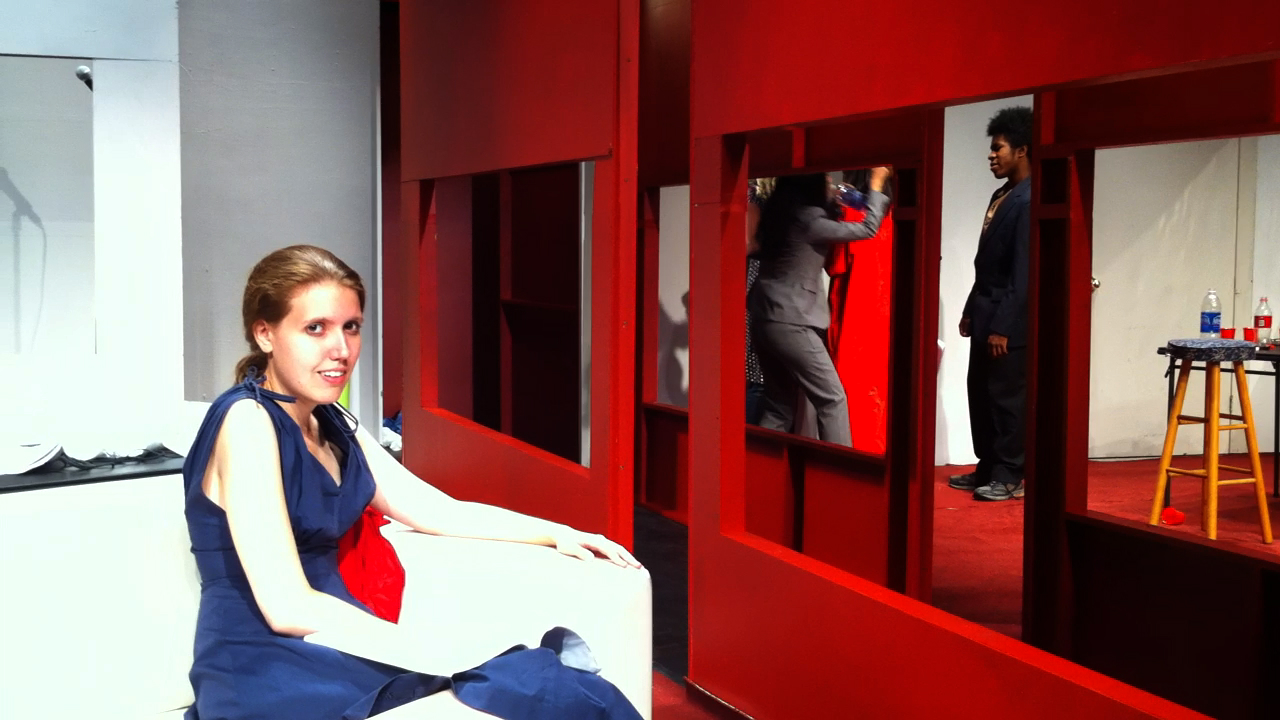 In this shot from the stage, you can see through the hallway to the other side (and me sitting on the couch!).

This both split up the stage into different areas and gave us lots of places to run/jump/crawl through during chase scenes. Another amazing aspect of the production was the use of live film and projection. When the audience walked into the theater, they saw the front of the stage completely blocked off by a wall of boxes, which were later knocked down. These boxes, as well as a monitor near the edge of the stage, were the spaces to stream the live video feed from the camera Jay carried with him onstage during the entire play. So the audience got the best of both worlds – a whole scene to watch and dramatic closeups of the action. 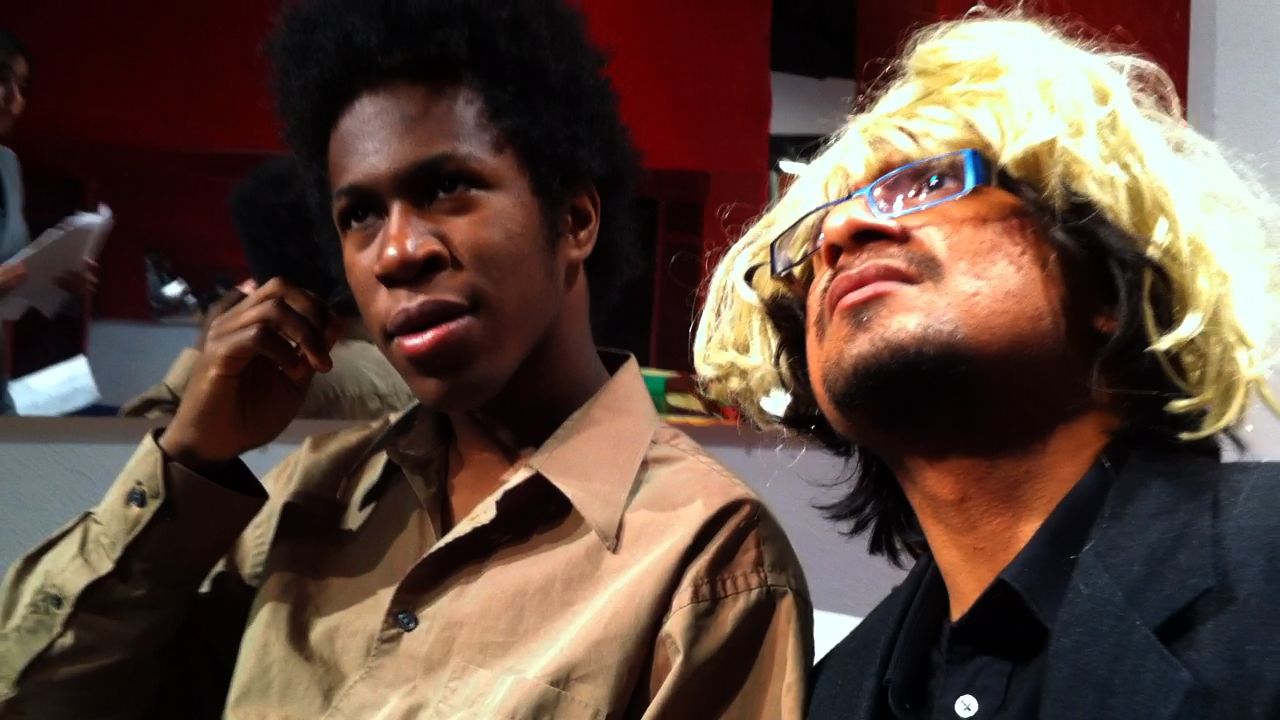 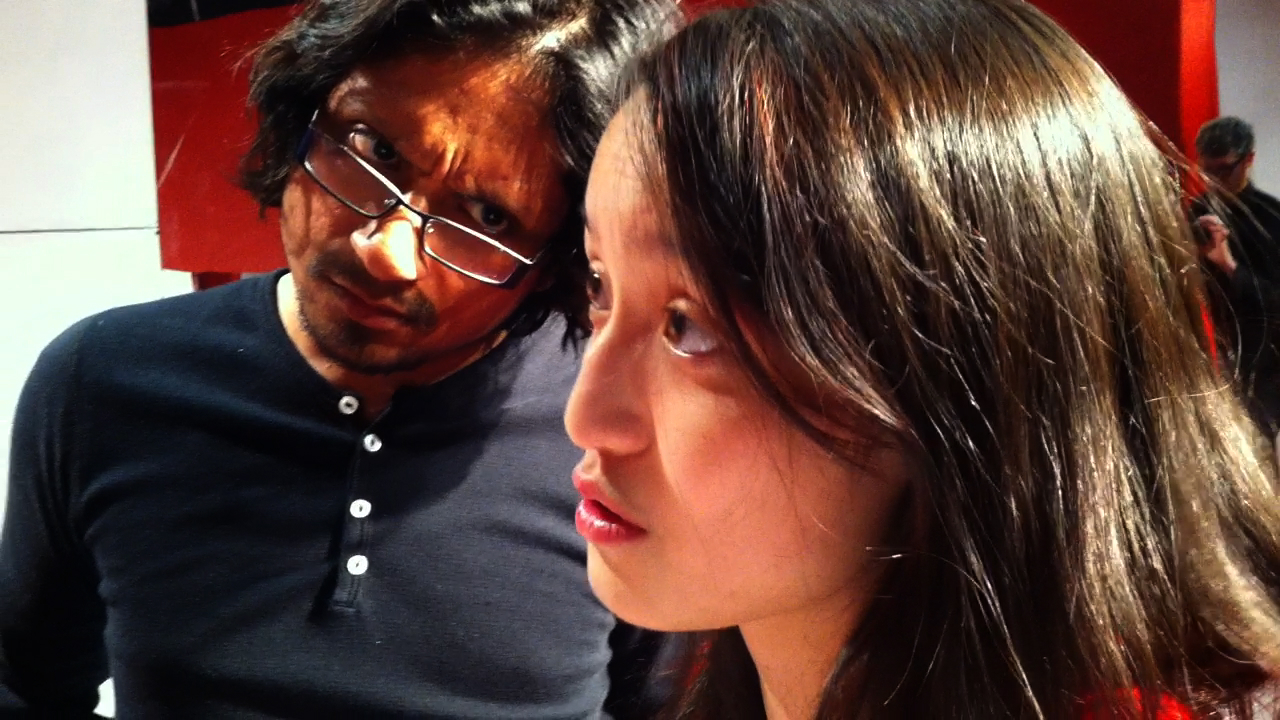 Or this one! Very intense.

Finally, several of the side walls were mirrored, which gave us even more fun effects to play with. 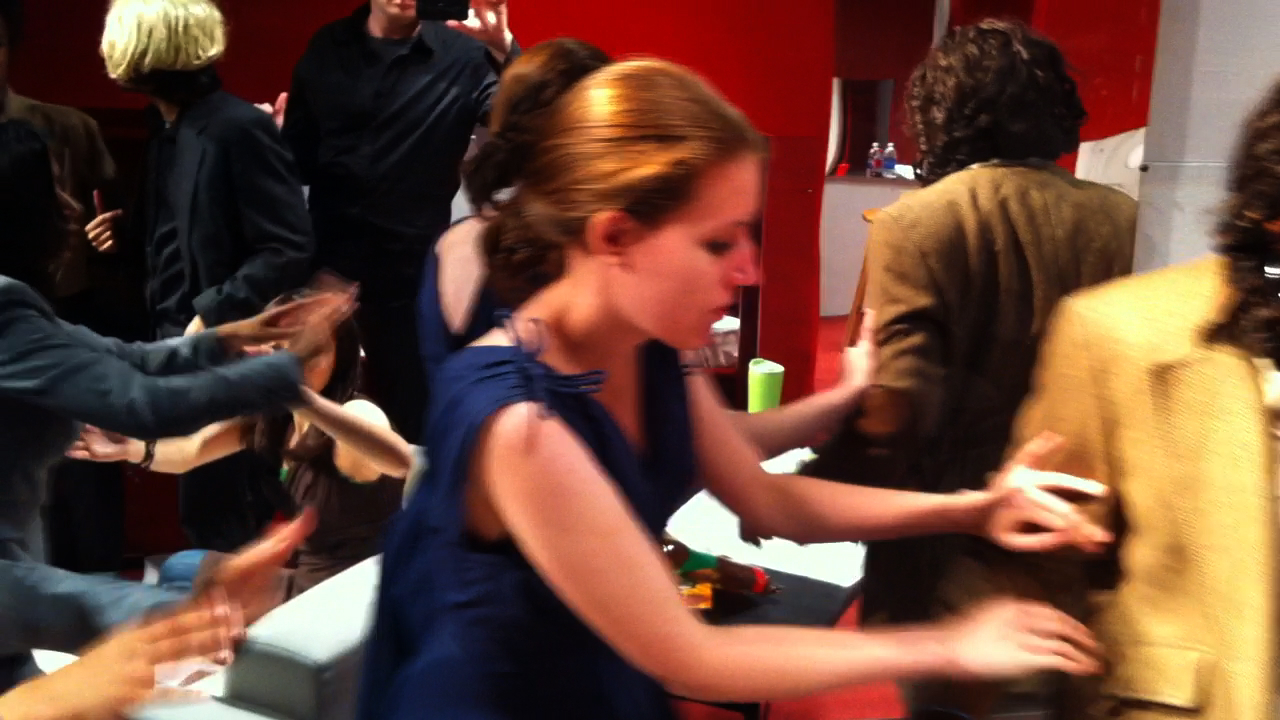 This high action scene of the group looks even more frantic when there’s two of everyone! Plus, you can see Jay filming in the background, which breaks the already-smashed-to-pieces fourth wall even more.

Our production of World of Wires was a rough workshop of some of the script, but the play continues to move forward in production. In fact, the full show of World of Wires will be performed in January in New York. So, if anyone happens to be around New York during IAP and happens to hear of it, I’d highly recommend seeing it. At the very least, you’ll get to see people run through a wall of boxes.

4 responses to “World of Wires”