Ten Things I Hate About Europe by Sam M. '07

Well, not really. More like, Ten Things I Like About MIT. You've got to accentuate the positive.

DID YOU KNOW? The phrase “throw another shrimp on the barbie” was invented by the Australian Tourist Commission. They actually call shrimp “prawns” in Australia. However, the incident of a dingo eating someone’s baby really happened.

Okay, this entry is not really negative, but I liked the title and couldn’t bring myself to change it. Actually, this entry was originally titled “Trimalchio in West Egg.”

About a month ago I got an e-mail from my labmate Jacqueline ’07, who’s working at NIST this summer. I was really puzzled by the last line, in which she said she couldn’t wait to get back to MIT, especially considering that she took 6 classes and 75 units last semester and as a result spent April and May in a little less than serene condition. But after 2 months, I’m really starting to see what she’s talking about–even though I live in a dorm with two other MIT students and see more almost every weekend, there are some things about MIT that you still can’t replicate, no matter how many MIT students you have together.

So, here’s ten things I miss about MIT.

1. Running along the Charles River. Yesterday I did a 13-mile round-trip run from my house to my office, and although the Rhein river is a little cleaner than the Charles, I really miss the 17 miles of running paths set up along the river, and how the scenery changes from the Esplanade to MIT to Harvard to small highway to Watertown. MIT is in a prime location for you to run anywhere from 3 to 17 miles in a closed loop around the river.

2. Pizzeria Regina. Although we’re taking a 5-day trip to Italy in two weeks, I doubt that any of the pizza places at which I will probably be eating will compare to the brash, greasy American charm of the North End. The German pizza I’ve had here is, well, kind of like pizza. Strangely, I do not miss Anna’s Taqueria at all.

3. My turkeys. My work with Bayer CropScience this summer is kind of cool, but I can’t wait to get back into saving the world in my UROP, where I take ground-up turkey carcasses and put them in a machine to make usable fuel. my grad student, Andy, told me that he’s got the HPLC back up and running and that we can start collecting data again, which is pretty exciting. And with $1500 of funding from the Martin Family UROP fund for undergraduate sustainability research, I might even get a raise! After only two years! 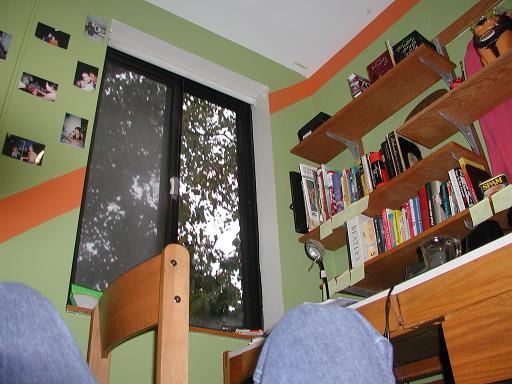 Some people have compared my paint job to vomit, but I happen to think that light green, orange, pink, and dark blue go together swimmingly. I don’t miss having a single so much as I do having my nice little bed tucked in the corner of my room, carpeting, a clean bathroom (shared between 6 people), and a lion cookie jar that says “GET YO’ HAND OUTTA MY COOKIE JAR! ROAR!” whenever you open him. Sadly, there was no room for him in my luggage.

5. Cooking. Okay, I really think that everybody who comes to MIT should live in Burton-Conner. It’s arranged in suites such that for every 4 – 10 people you get 2 – 3 full-size refrigerator/freezers, a stovetop, plenty of counter and cabinet space, and an oven. Usually there’s an old microwave hanging out in there too. Pots and pans are not included, but you’re welcome to use mine as long as you wash them and put them away when you’re done. We kind of have all this in my summer dorm in Germany, but instead of full-size fridges you get really tiny personal fridges with barely-cold freezers, and instead of an oven you get a microwave with an oven functionality that we have thus far been unable to figure out using the English, German, and Arabic manuals.

6. Marching band. I kind of joined this as a joke last year, but one month later I already was music librarian, mellophone section leader, SPAM Scholarship winner 2005, and, well, kind of committed to helping engineer the band’s phoenix-like rebirth this year. Based on what I’ve been seeing on the e-mail list, we’ve already got requests for a ton of gigs this year, some of them kind of prestigious, most of them pretty much bizarre, and I really want to be back there playing with them. So, join marching band next year. No experience necessary. No, really. In fact, less experience might even be preferred.

6a. Beyond just the band, though, I miss having free soundproof practice rooms with pianos in my dorm and on campus–sometimes in the midst of working on a pset or a test or something, I really just want to go down and belt out Bohemian Rhapsody or one of the other two songs that I know how to play on piano, and there’s nowhere really to do that in Germany.

7. Communication. Living in Germany has taught me valuable lessons about communication, seeing as I have to live without a cell phone and without home internet access. The first two weeks weren’t easy, but I made it over the hump and I’m actually learning to appreciate the slower, laid-back, more planning-oriented pace of life before ubiquitous wireless access. But it’s always nice to be able to check your missed calls, SMS, e-mail, AIM, facebook messages, and blog comments when somebody’s late for a meeting. Especially because most people I know at MIT have read my blog and therefore subscribte to Verizon as I suggest, so in-calling is free.

8. Classes. No, really. I’m worried that when I get out into the morally ambiguous real world, I’m going to seriously miss the structured, inarguable evaluations of human worth provided by college classes. There are so many great, hands-on classes to take at MIT that I sometimes regret spending my some of my free elective time on Real Analysis and Inorganic Chemistry, but this term I’m super-psyched, as they say, for a class taught by Pulitzer Prize-Winning composer John Harbison.

9. Pour House. I don’t think I’ve been there all year, but where else can you get a double hamburger, reheated french fries, and a gigantic, very respectable milkshake for about $5 on a Saturday night? Oh, but while I’m thinking about restaurants, one thing I seriously do hate about Europe is that it is basically impossible to get water anywhere, even in the middle of summer. You don’t get it in restaurants and you can only ask for it if you’re a stupid American, drinks are prohbitively expensive, and I don’t think I’ve seen one public drinking fountain since I got here. Oh, you say, I’ll just carry a water bottle with me everywhere and refill it in public bathrooms. Well, first of all, that’s kind of nasty, dude, and two, public bathrooms cost money.

10. The people. As Lois McMaster Bujold once said, “My home is not a place. It is people.” And I miss conversations about Faraday cages at 2 AM and hearing about the killer death airplane competition they hold to celebrate the end of unified engineering and shamefully trying in vain to split the bill at restaurants and pulling all-nighters on p-sets together while listening to Prince and jokes about the Schrodinger equation and simultaneously hating and loving every minute of our crazy MIT existences.

7 responses to “Ten Things I Hate About Europe”