My highly biased and personal opinions about Ring Premiere.

Friday evening was the unveiling of the Class of 2009 Brass Rat. Ring Premiere, as its called, is one of the largest milestones of the MIT undergrad experience.

A lot of you probably have class rings from high school, or might even be in the process of picking one out right now. If yours is anything like mine, it’s got a pretty simple design. There’s a birthstone with my high school’s name winding around it on the front, my class year and high school’s symbol on one side, and a custom design on the other (mine has my name and a field hockey symbol). Here at MIT, we do things…a little differently.

First, some history: the MIT class ring is officially called the “Standard Technology Ring,” and has been affectionately nicknamed the “Brass Rat.” It’s not brass and it’s not a rat, don’t ask me. (If anyone else has an explanation for this, by all means, drop me a note.) It’s been an Institute tradition since about 1929 for each class to customize the ring to reflect their time here. At the end of the freshmen year, about a dozen students are appointed to the Ring Committee (by the class council, I believe). The Ring Committee spends the first half of the sophomore year designing the ring, which is unveiled at an event called Ring Premiere.

I was really excited about Ring Premiere, until the Ring Committee accidentally leaked the design early (oops!) so I heard some gossip about some of the ring’s details beforehand. This ruined the fun a little bit, but I’m glad I went to the Premiere, which was a really fun experience.

Now for the fun part: Class of 2009 Ring Design

A friend of mine was quoted in the Tech’s article about the ring leak (Carlos ’09’s comment was rather….colorful) saying, “That’s gross and disgusting.” I found this hilarious (partly because Carlos is pretty hilarious to begin with), and when I talked to him about it, he said that he mentioned a bunch of positive things too, but somehow the reporter forgot to mention those. So I’d just like to get my actual opinion of the ring out there before my name appears in the Tech in a similar fashion on Tuesday. =) (The girl sitting in front of me during the Premiere happened to be a Tech reporter, and I think she probably asked for my opinion because she heard me making loud and sometimes sarcastic comments the whole time. Hey, I missed Charm School this year.)

Overall, I like the ring. Designing a ring for 1000 people can’t be easy, and no one is ever going to be 100% satisfied. I definitely have some problems with it, (which I’ll elaborate on in a minute) but there are some really cool things as well.

Each ring typically has 5 components: the skylines on the sides of the ring, the map on the underside, the bezel (the front or top of the ring), the seal shank and the class shank (which go on opposite sides). Here are the images, along with my comments. Anything in quotes was taken directly from the design description page linked above.

The Cambridge skyline is shown at night, in tribute to the fact that MIT students are primarily nocturnal. =)
The Hacker’s Map

Each class has a hacker’s map on the underside of their ring, which depicts all of the campus buildings as well as the underground tunnels that connect them. One neat detail specific to the ’09 ring: building 6 is not connected to anything, to commemorate the fact that it has been inaccessible due to construction since our arrival.
Class Shank 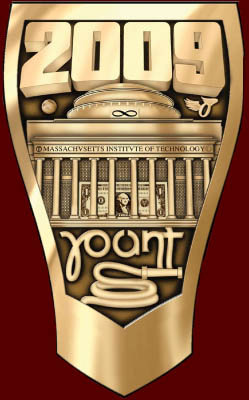 The class shank is usually centered around the image of the Great Dome and Killian Court, and our design is no different. My thoughts on the ’09 Class Shank:

The Awesome: Pluto! “In solemn remembrance of the former ninth planet, Pluto is engraved to the left of the Great Dome.” =) Also cool is the dollar bill behind the columns in Killian Court- back in the 70’s, a student pained a big mural of a dollar bill over the cashier’s office door. Years later, the cashier’s office was moved, and the space was renovated and made into a lounge. There was a huge controversy over this, as many students resented the removal of the mural as an attack on MIT culture. (You can read some of the Tech’s coverage of the story here.) In the end, the mural was removed, but a small image of it, along with an explanation, was left on the glass wall of the new lounge. While I personally was not upset by the removal of the mural, I’m glad the Ring Committee included a tribute to it on the Brass Rat. Also, below Building 10 is an ambigram. It’s an awesome idea that didn’t really come across so well, but basically the image reads “punt,” until you turn the ring over to reveal the word “tool-” both of which are MIT slang for “screw around instead of doing work” and “work really hard,” respectively.

The Less Awesome: The zero with wings (to represent the fact that we’re the last class to be able to abbreviate our year with a 0, as in ’09) and the T token (on the left of the inscription, included to symbolize the retirement of the token in favor of the card form of payment) are…weird. There’s also supposed to be a fire department symbol to the right of the inscription in tribute to the fire truck hack, which would have been awesome. Unfortunately, the symbol is so small and obscure that it’s impossible to recognize, which makes its inclusion pretty much pointless, in my opinion. The infinity on the dome is also kind of silly- it’s supposed to represent the “infinite possibilities at MIT” or some such thing, but I think they could have come up with something much cooler for such a prominent symbol (the ’08 ring has their class number in binary, for example). 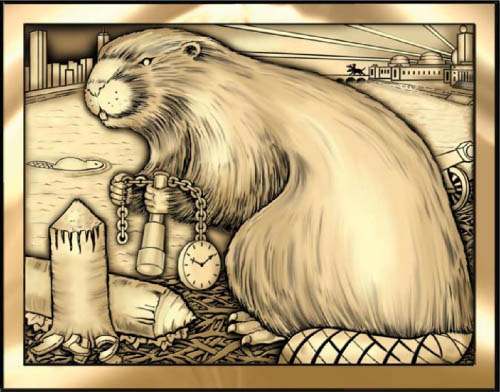 The bezel is the top of the ring and always features the Tech mascot, the Beaver. The bezel often has the most room for personalization.

Cool things: The motto “IHTFP” is artfully hidden in the beaver’s tail. Look along the up and right diagonals if you don’t see it right away- it’s hidden pretty well. There’s also a canon in the background to represent “MIT’s unique hacking community and rivalry with other institutions.” Then there’s this line: “The gnawed logs in the lower left represent the hard work of the beaver and of MIT students. Below the fallen log are eight ivy leaves crushed by the beaver’s accomplishments.” =)
Uncool things: The hands of the watch have been replaced with the male and female symbols, to represent how gender balanced the class is. I’ll explain my take on this in just a minute… 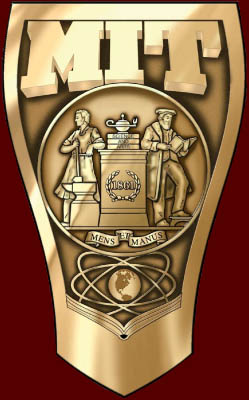 The seal shank features the official MIT seal. There’s also some room for customization, and most classes add a few symbols to this shank. The seal shank is the part of the ring that has the most potential for controversy lately. Here’s a quick history lesson: the official MIT seal shows two figures- a “scholar” and an “artisan” to represent the two parts of MIT’s official motto “Mens et Manus” (“Mind and Hand”). The Class of 2002 Ring Committee modified the seal on their ring to include a woman. The Class of ’04 originally intended to do the same, but when the design was leaked early and the class reacted negatively, they changed the seal back. More recently, the Class of ’07 modified the seal, and there are some interesting quotes from students in the article in the Tech about the ’07 Brass Rat.

Here’s my take on the whole thing: I personally would have preferred to have a woman on the ring. Why? Because I’m a woman, and I go here, and when I look at the ring and seal without a woman, I don’t see myself. So yes, I’m a little disappointed that the seal features two men. But here’s the thing- I’m still going to buy one, for crying out loud. If no one had ever put a woman on the seal, I doubt I’d be organizing some crusade to get one on there. But the fact is that once the ’02 Ring Committee opened that can of worms, there’s no shutting it. The thing that really, really, really ticks me off (to use the polite term) is how angry other people get when the topic is raised. People walked out of the ’07 Ring Premiere, all because the class ring had a person of the female gender on it. Are you freaking kidding me? They tried to put together a petition to have an alternate version of the ring. They were that offended by a symbol indicating an even gender ratio at MIT that they never wanted to wear it. That may not sound so bad, but you’ve got to understand that the Brass Rat is a BIG DEAL here. Nearly everyone buys one and wears it for years and years. I met an alum from the class of fifty-something last semester who showed off his ring to me.

A lot of people claim that the seal should be unaltered because it’s “tradition.” It’s always been my personal opinion that tradition is a silly thing to hold as an absolute. I love that MIT has so many traditions here- like the Brass Rat, and hacking, and smaller cultural symbols like IHTFP and so on. But I see no reason why traditions can’t change. I mean, once upon a time it was tradition for only men to apply to college in the first place. Should we have held on to that particular tradition? When Melis blogged about last year’s Ring Premeire, she said she was most upset by the members of her class who cheered at the reveal of the all-male seal, and I have to agree (there was a similar reaction to this year’s reveal, although I think Melis’s class’s reaction was stronger). I may not be offended very much if there’s no woman on the ring, but I am offended by the people who stood and cheered because there wasn’t one. Just like Melis, it really ticks me off that people at a place like MIT aren’t more open-minded to progress and change, and would be offended by the alteration of an MIT symbol that does not relfect forty-something percent of the student body simply because it breaks with tradition.

So yeah, I do think the male and female symbols on the stopwatch are a cheap cop-out to dealing with the actual issue.

Like I said, I really do like the ring. I would have preferred a woman on the seal, but I’m not adamant about it. I am upset about people’s reaction to that whole issue, but there’s not much that can be done about that, is there? In the end, there were some awesome icons (Pluto and the canon were my favorites) and I’m just excited to get my very own piece of MIT history in April.

More Reading about the Brass Rat:
A Bevy of Beautiful Brass Rat bezels (by Matt)
Presenting…the 2008 Brass Rat!!! (be Melis)
The Brass Rat (by Matt, about the 2007 Ring Premiere)
Tech article about the ’08 ring
2007 Brass Rat (by Mitra, who was on the ’07 Ring Committee)
Ring Delivery Photos (also by Mitra)