Can MIT brainpower, with the help of the LHC, finally put the matter to rest?

Last week, six of MIT’s most illustrious professors gathered in 26-100 in a quest to solve one of the greatest conundrums of our time: latke or hamentaschen?

The latke and the hamentaschen are both Jewish foods that have long divided the world, being the source of almost every battle, economic downturn, and cataclysmic natural event (including the extinction of the dinosaurs). After fighting two world wars over it, in 1946, the scientific community convened for the first time at the University of Chicago to debate each foods’ merits. Since then, the tradition has spread to other universities around the country, including MIT, which hosts the event every March between the two holidays the latke and hamentaschen represent.

The latke, essentially a potato pancake, is traditionally eaten during Hanukah, in November or December, while the hamentash, a fruit-filled triangular delicacy, is associated with Purim, which is in February or March (this year, it begins at sundown on March 19). In the interest of keeping this entry unbiased, I won’t reveal which side I’ve chosen – or rather which three sides… 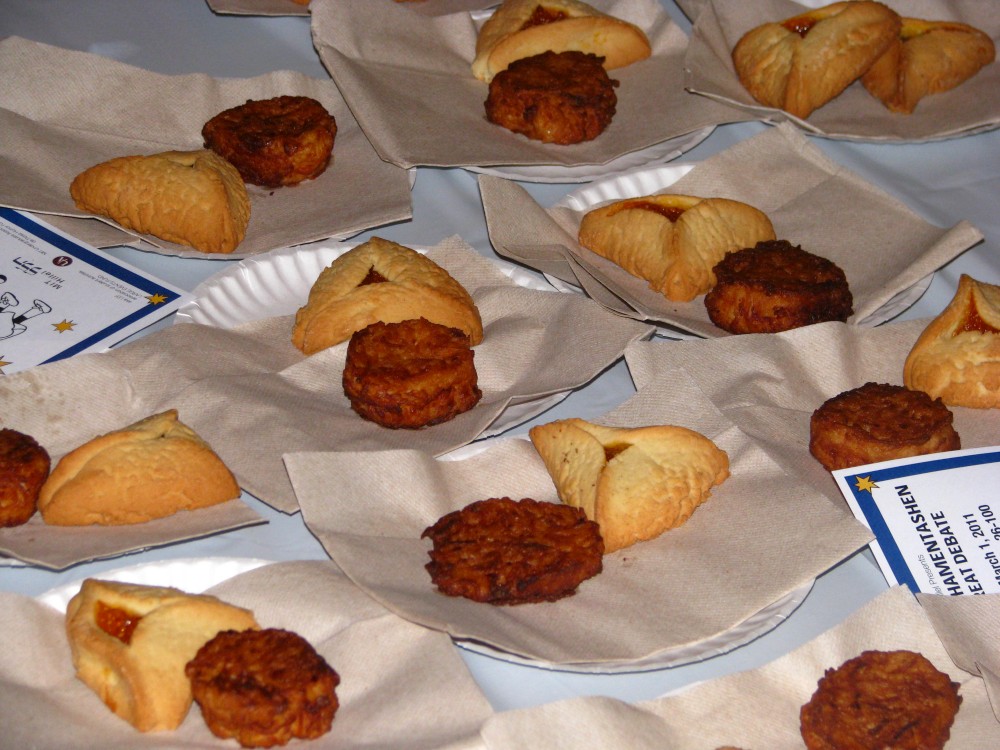 This year’s debate was moderated by Hillel Executive Director and Rabbi Michelle Fisher. Supporting the hamentaschen were Shaoul Ezekiel (Aero/Astro), Steve Wasserman (BioE), and Fatih Yanik (EECS), while the latke was backed by Sanjay Sarma (MechE), Allan Adams (Physics), and Robert Weinberg (Bio). After being introduced to our mascots, Rabbi Fisher recounted the history of the millennia-old controversy and officially opened the debate, declaring “the decisions we make tonight will determine… nothing.” 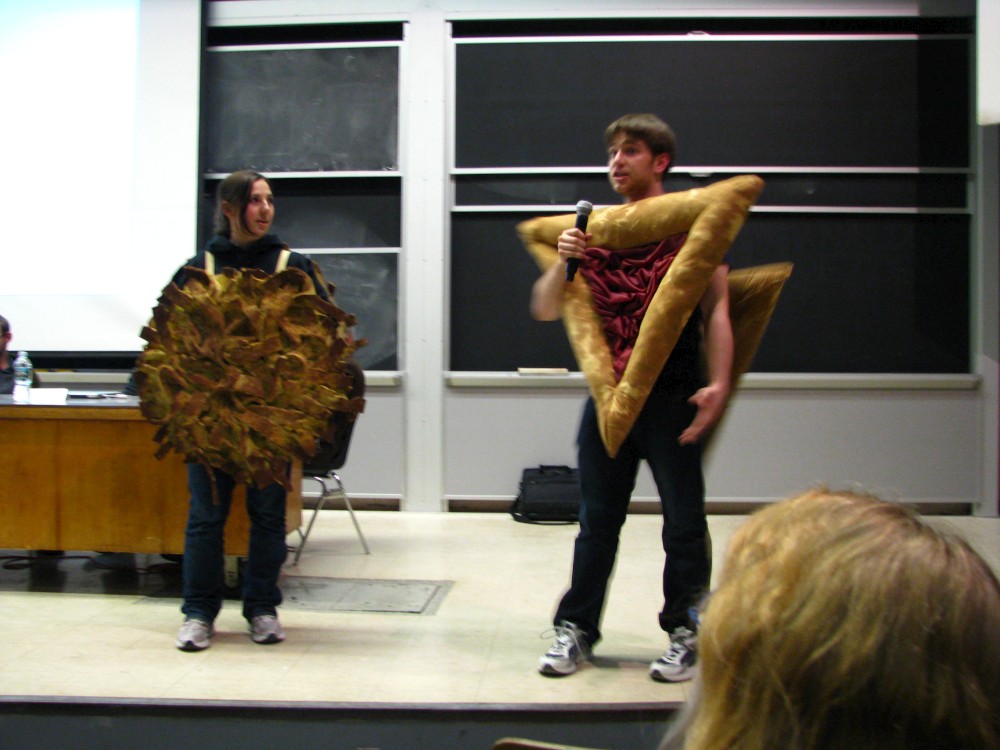 First to defend the hamentaschen was Professor Ezekiel, who recounted how he had been approached about participating in the debate and how he was unfamiliar with the foods – despite being Jewish himself – because the latke and hamentaschen are both foreign to his native country of Iraq. Nevertheless, he aimed to resolve the age-old dispute by looking at how the two foods react after being shot with laser beams. The hamentaschen remained unaltered, while the latke… well… it didn’t hold up so well. 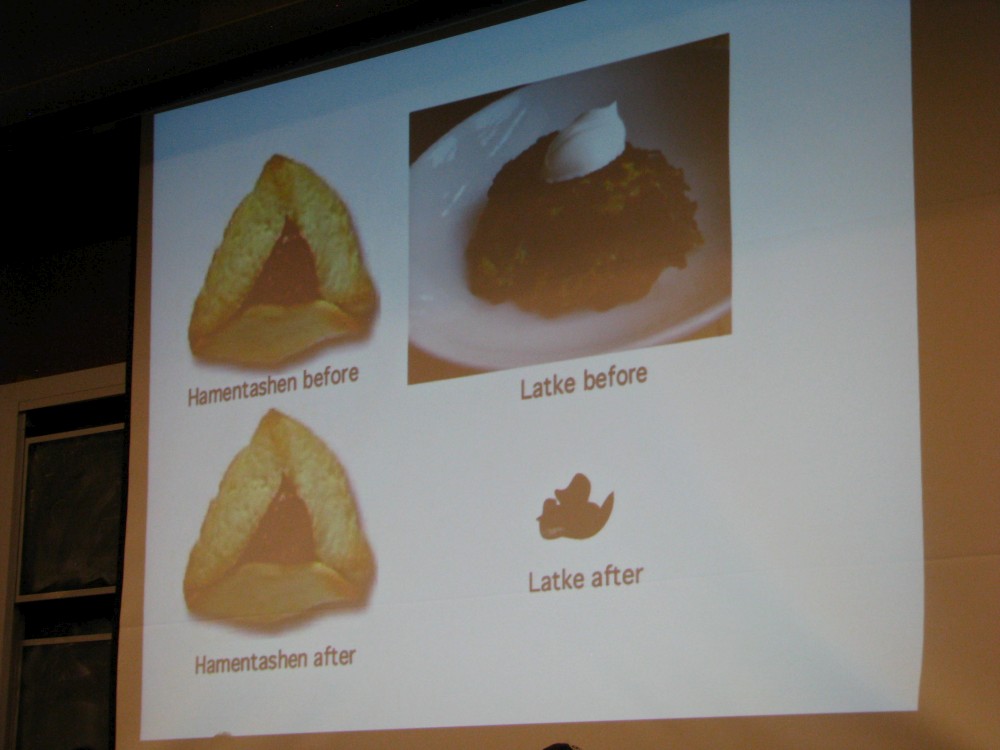 Professor Sarma, on the other hand, pointed out that latkes will solve the energy crisis, as the latke (allegedly) is capable of generating its own heat. In the future, he says, we’ll all be driving Latcars. As proof, Professor Sarma display his results from a drive around Borough Park, a heavily Orthodox Jewish neighborhood in Brooklyn; and, behold, those homes where occupants ate latkes did not have their wasteful heating systems cranked up. Oh, and Professor Sarma added that hamentaschen taste like goo. 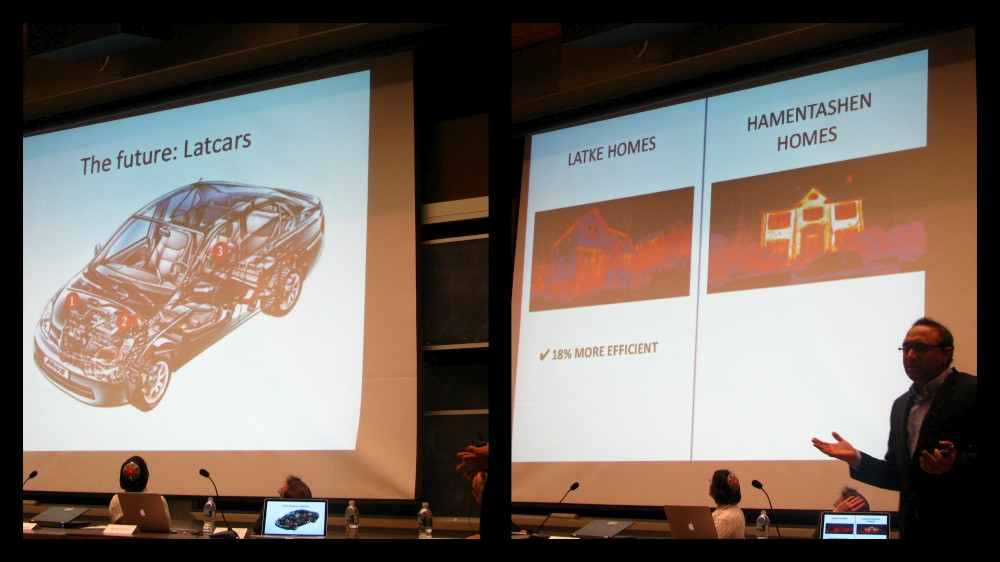 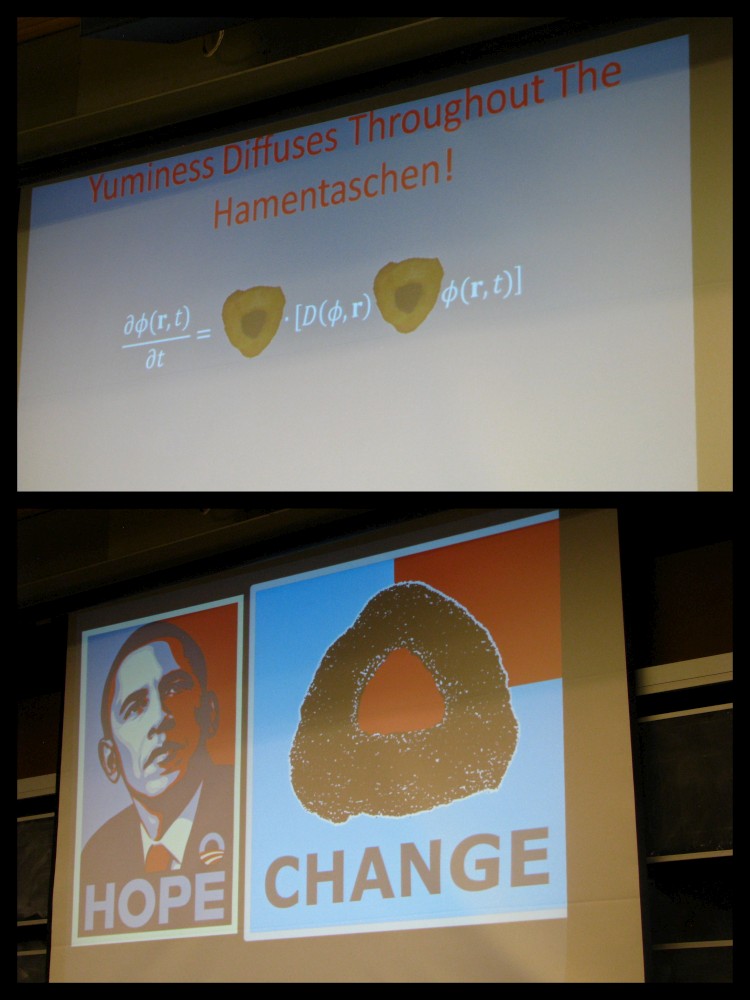 Easily the best argument of the night, however, goes to Professor Adams of the latke team, who produced results from the LHC – the Latke-Hamentaschen Collider. He actually performed some collisions between the two foods (although I’m under the impression they took place in MIT’s Edgerton Center rather than the Swiss collider): 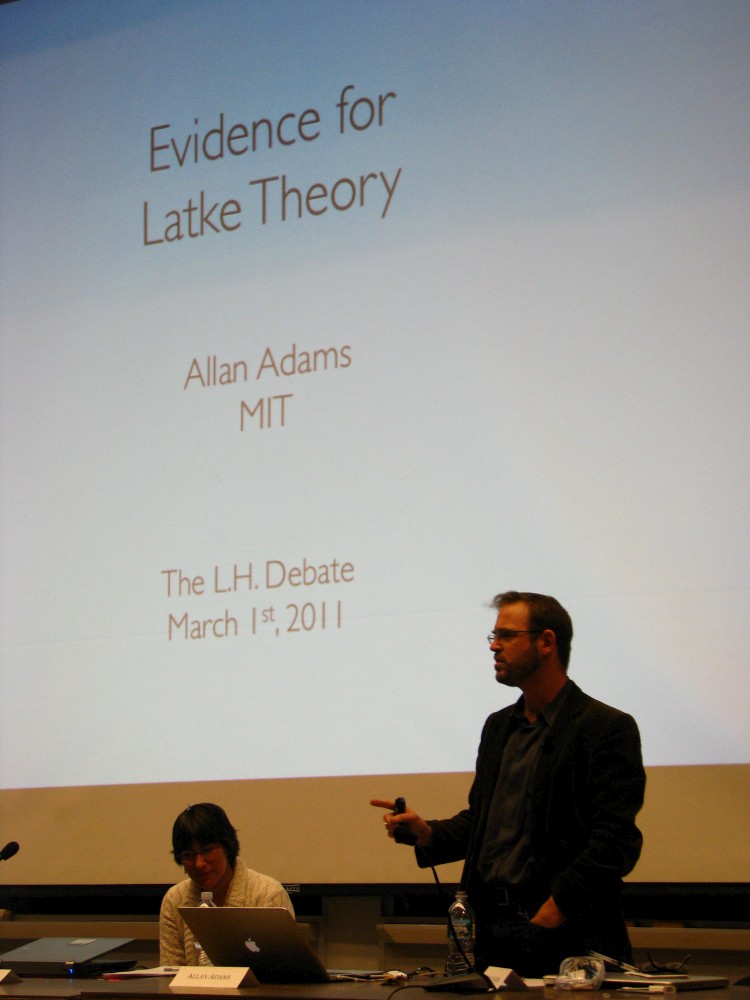 (Do forgive the shaky camera work; I was trying to pay attention (not look through the viewfinder) while recording.)

Closing arguments for the hamentaschen supporters were handed to Professor Yanik, who based his point around apparent dietary benefits. Whereas the latke makes worms fat and pimply, the hamentaschen makes worms lean and sexy. And if that isn’t convincing enough, look what happens to a human being when he consumes latke. 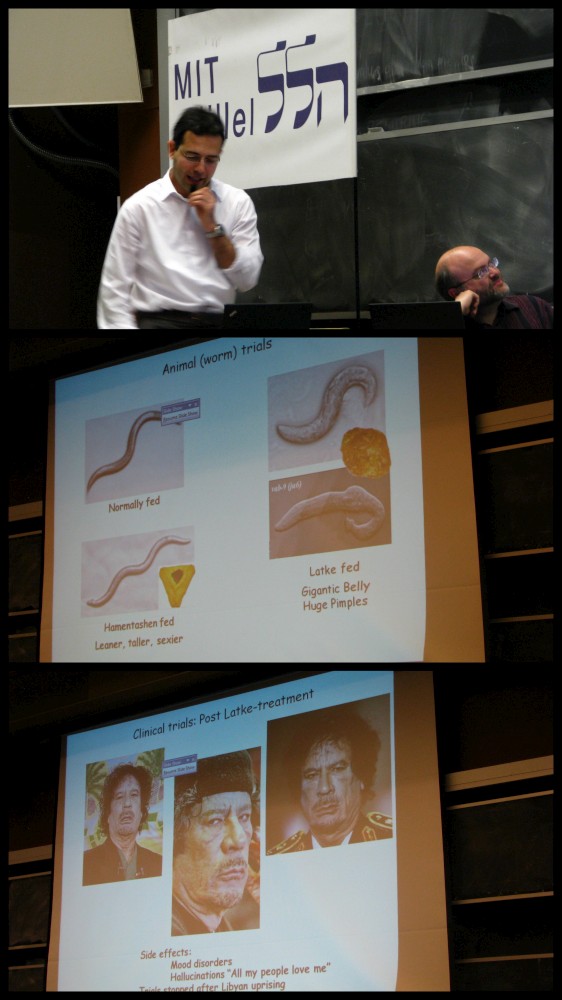 Professor Weinberg’s closing remarks were less grandiose, simply correcting the history of latkes and hamentaschen (with an even more outlandish history).

Following ninety-second rebuttals, the hundreds of people in attendance were permitted to vote on the winner. Once again, as in the past, the votes produced a tie. So, the answer to the question from the teaser text is no, no it cannot.

But maybe next year.

6 responses to “The Great Debate”