What I did for a Klondike Bar, caesar salad, chicken florentine, mushroom ravioli, chocolate torte, and love.

Today I decided to do start doing things the Greek way as I was inducted or inaugurated or initiated or something into the MIT chapter of Tau Beta Pi, the national engineering honor society. I don’t know what they actually called the ceremony, but it used the word “covenant” enough times to make me a little bit uncomfortable. Now, TBP isn’t anything like one of MIT’s 27 fraternities or 5 sororities, but I still had to sign a non-hazing agreement, which also made me a little bit uncomfortable. 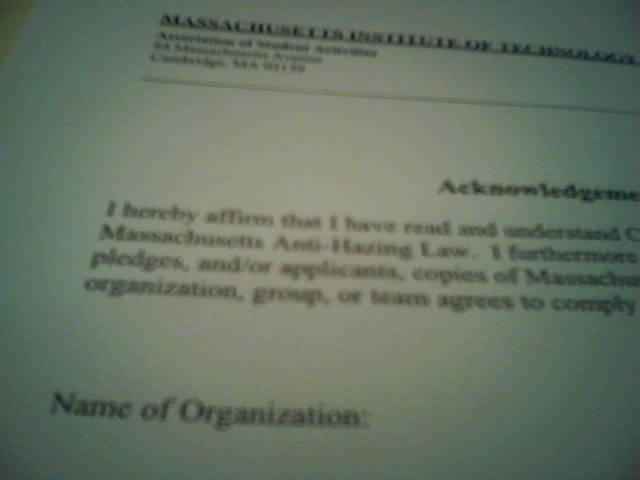 MIT is actually quite strict about hazing; if they catch you doing anything even as bad as throwing a freshman into a shower the night before the first 8.01 exam, they’ll excommunicate you from MIT, lock you in a pillory, and melt the key MIT’s nuclear reactor. Of course, I’m totally forbidden to tell you anything about what the ceremony involved such that it necessitated this non-hazing agreement, but you can use your imagination as to the kind of requirements for initiation that an engineering honor society might have.

Or, you know, just look at this PDF.

After the ceremony we had elections. It took us 2 hours and 15 minutes to elect 16 positions. Why? Because it is important. TBP does some really cool stuff on campus like Leonardo Dinners with the faculty, an Engineering Day to teach area high school students about engineering majors (do you know what an engineer is, really?), and a career fair, which is the main reason that Tau Beta Pi is one of the three most affluent student groups on campus. At the end I finally decided to volunteer for social chair because it had gone unfulfilled for so long, and holding this position lets you go to all the social events that you plan for free. My goal is thus to plan the most extravagant and self-serving social events I can conceive for the chapter in the coming year.

After dinner we headed down to Maggiano’s Little Italy in Boston–a trip made in a mere four T stops, which was especially nice considering the AccuWeather RealFeel

2 responses to “The Greek Way”