I’ll assume that we’ve all heard of the Nobel Prizes, yes? Perfect, now how about the Ig Nobels? The Ig Nobels are a humorous offshoot of the prestigious Nobel Prizes, honoring individuals for achievements that makes people laugh and then think. What does this mean? Well, basically, scientists and researchers from around the world are selected because they have research that seems completely absurd. They are then voted on, discussed, and eventually cropped down to the final prize winners.

I know you’re saying to yourself “I’m ridiculous! I can do really absurd research! I should win an IgNobel!” More power to you, but here’s what you’re up against:

In the category of Linguistics — Juan Manuel Toro, Josep B. Trobalon and Núria Sebastián-Gallés, of Universitat de Barcelona, for showing that rats sometimes cannot tell the difference between a person speaking Japanese backwards and a person speaking Dutch backwards.

In the category of Peace — The Air Force Wright Laboratory, Dayton, Ohio, USA, for instigating research & development on a chemical weapon — the so-called “gay bomb” — that will make enemy soldiers become sexually irresistible to each other.

In the category of aviation — Patricia V. Agostino, Santiago A. Plano and Diego A. Golombek of Universidad Nacional de Quilmes, Argentina, for their discovery that Viagra aids jetlag recovery in hamsters.

Do you still think you’re capable of something worthy of an Ig Nobel?

The informal lectures are when you get a chance to actually hear the reasoning behind all of this research. Consider it a “Why” to the “Huh?!” Each speaker has 5 minutes to share all of their research and try to convince the audience that they aren’t off their rocker. To avoid any speakers hogging the stage it’s tradition to employ two members of the audience to help with moving the show along. When they asked for two volunteers I did the typical 6th grade “Me Me Me Me Me!” and waved my hand around from near the back of the lecture hall (actually, it was a subdued and altogether graceful raising of my hand). The MC picked me and said “Great, we have a time keeper! Do you have a watch with a second hand?”

Uh oh. I look at my watch. I stuttered for a bit. I look around at the 200 people in the room, all looking at me. I then look back down at the MC, at which point I had to confess.

Everybody around me and throughout the lecture hall just started laughing and clapping, it was pretty amazing. I was quickly handed a watch with a second hand by Mason ’10 and was all set. I was teamed up with an associate time-keeper. Her job was to sit up front near the speaker and turn her cell phone up to an obnoxiously loud volume. My job was to call her every minute and tell her how many minutes were left in each person’s presentation. Here’s a picture of us exchanging phone numbers: 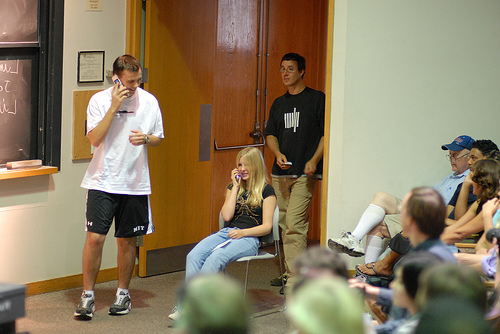 The rest of the ceremony went off very well, with me calling and her warning. We heard stories about homosexual mallards, bottomless bowls of soup, and vanilla extracted from cow dung, creating a great start to the day. I fully intend on going to both the ceremonies AND the lectures next year so I can get the true Ig experience.