The Marching Band Refused to Yield by Sam M. '07

Band in the name of love.

DID YOU KNOW? Kelly Clarkson was the most-played artist on American radio in 2006, even though she only released one single: “Walk Away.”

Today, 3/4, is unofficially national marching band day. Get it? Anyway, to celebrate, I was going to do an entry about the MIT marching band’s slush-infested Valentine’s day crusade to deliver something like 2,000 love-infested “band-o-grams,” but my good friend Ben is in Boston this weekend visiting some college or other, so I probably won’t get a chance to do it tonight. Anyway, blame Ben, because I am infallible. But I at least wanted to start writing today because there’s only one national marching band day per year. So until I get a chance to get all the pictures together, here’s a poem I wrote when I was seven:

I think it’s basically the greatest artistic achievement of my short life.

Hokay. So. Nine days and 10,000 miles of flight later, I’m finally about ready to finish up this entry on marching band with some pictures. 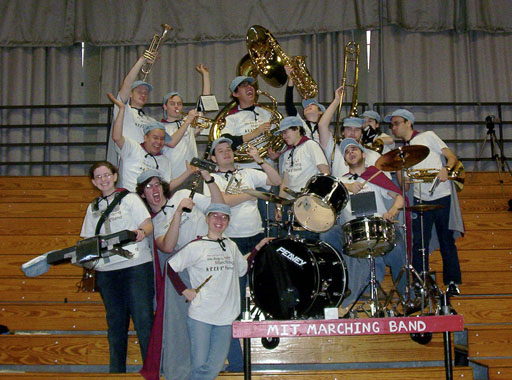 So, to answer all of your questions, here is the marching band in its full 14-member glory. I think in total we have about 20-25 people who are associated with the band on a rotating basis, but most performance days range around 16 due to MIT students’ busy schedules, and the fact that most of the events are on Saturday afternoons, which means like 3 people oversleep every week.

Also of note: the awesome drum cart that our clarinet player, Michael ’09, built for us. Since we don’t have enough percussion players to have, you know, more than just a snare drum, we decided to lug a trap set everywhere we go with us. The cart rolls along the ground with great ease, and can also be fitted into any set of bleachers that MIT can throw at us. 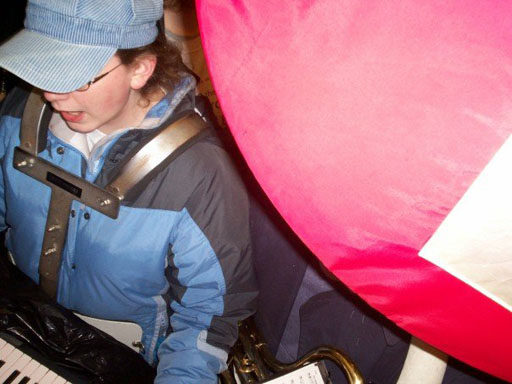 One instrumentalist who I forgot to mention in my earlier breakdown of the band is Mary Beth ’10! She plays piano! In a marching band. We can’t really afford a marimba or glockenspiel or anything, so, engineers that we are, we adapted a snare drum harness into a 1986 Casio Keyboard harness, outfitted her with an amplifier and battery pack, and told her to play whatever she wanted. Sometimes when the drummer gets tired of making up a cadence, we just let her use one of the preset drum beats so we can keep time marching. My favorite is “samba!” 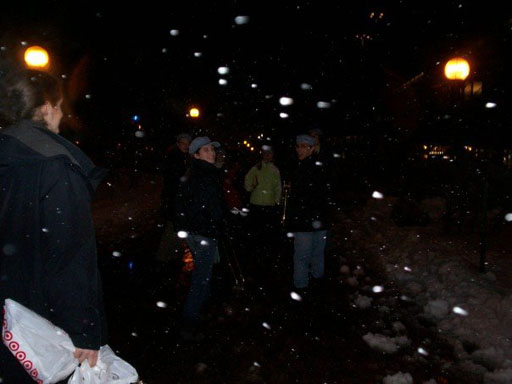 And even dragging like 20 pounds of electrical equipment around, Mary Beth was still unafraid to march around Boston on the slushiest day of the year 2007. In order to spread some love and, more importantly, make some money, the band decided to sell “band-o-grams” to unsuspecting MIT students. Basically it meant that you give us $15 and we show up wherever you want on campus and play your beloved a song. Example songs included a vocal version of “All You Need Is Love” and “Dragostea Din Tei.”

No, really, the MIT marching band plays Dragostea Din Tei. As trombonist Caroline ’08 put it, “I think we should play only the numa numa song, and not only would I never get sick of it, I would enjoy it even more each time.” 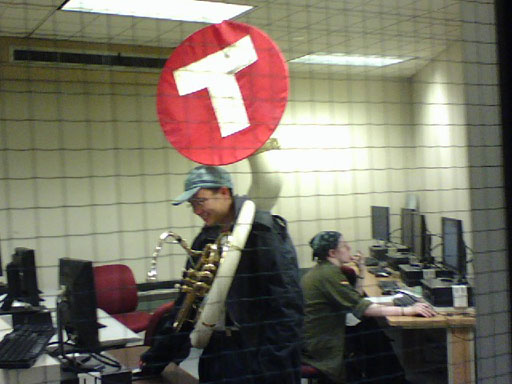 Earlier that night we needed something from a printer, so we had our tubist Ken head into the cluster and grab it. That was more of an ordeal than you can surmise even from this picture.

In conclusion, the MIT marching band is the greatest musical group of the new millenium and will probably win a Grammy before you die.

52 responses to “The Marching Band Refused to Yield”