...is labor and sharing and loving.

DID YOU KNOW? Female komodo dragons can apparently have immaculate conceptions. No, really.

So I was just sitting here this evening (don’t you mean “this morning?”) watching a biblical archaeology special on The History Channel that was trying to determine the precise location of Sodom and Gomorrah when I decided to check my grades, like I do, you know, every 20 minutes. Because there might still be someone in the Student Services Office working really hard to get those grades in right now! Anyway, when I logged into WebSIS, I took special notice of a link that had been there for the past three years: 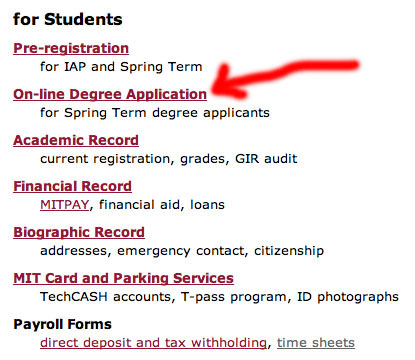 “Hmm.” thought I. “I guess that’s me.” I noticed that it had to be in by February 9 or I would suffer a $40 fine, so I figured there’d be no harm in doing it tonight. A few moments later, I had produced this image, a “diploma mock-up — for illustrative purposes only:”

I remember lounging around my suite with a roommate named David and a sophomore named Katy about this time my Freshman year. “Wow guys,” said Katy, “You’re one-eighth of the way done with MIT. How does that feel.” Now, in my mind I know that it was a long time ago because Katy moved in with her boyfriend two months later and we never saw her again (shame, because I think that to this day I owe her a raw chicken breast). But my heart, Anita, but my heart, FEELS like it was just yesterday. And now I’ve got one-eighth of the way left.

SUPER SORRY about the lack of blogging for the past month. I promise to write retroactive entries on everything that kept me too occupied to blog, including using 22 M formic acid to fuel you cell phone, a song written on an e e cummings poem, being called “ingenious” by a Pulitzer Prize-winner, going to Blue Man Group, and flirting with Ina Garten.

11 responses to “The Promise of Ending”