The train in Spain is ungainly, take a plane by Sam M. '07

I'm an MITblogger, get me out of here!

DID YOU KNOW? Square wheels will roll if the road is in the shape of a catenary curve, which is the shape that a string hangs in when you hold it between two supports.

Barcelona, I don’t know about. The first day we were there, it struck me as a vibrant city with stunning architecture, elaborate artistic displays and blissfully warm beaches. The second day, it seemed more just like your average resort town on the Atlantic ocean. And the third day was not supposed to exist, but I had a miscommunication with a German ticket officer that ended up with me not reserving a ticket for the Super Special Hotel Train, leaving Ling ’07 and I stranded there waiting for one of the two or three daily trains to get us into France, AKA a country with a functional rail system. Anthony, with all your work with Amtrak and studies in Course 11, I think I have a job for you next summer.

Anyway, I guess there are worse things that could happen to you than getting stranded in an expensive Mediterranean resort town.

So four days later, it’s still kind of hard to resolve all of these dissonant impressions of Barcelona into a single experience, but overall I’m glad that we ended up going. It’s unlike anywhere else I’ve seen in my limited travels of the world–I’ve probably said this before, but after about twenty years of travelling on the Delaware coast and three years spent living with a view of the muddy Charles river, it’s nice to be reminded that water is supposed to be blue (Laura discussed this at length, did she not?) and enjoyable to swim in.

Which reminds me! According to an e-mail from Ruth ’07 that I lost, they are even organizing a swim contest in the Charles River! Just think of what a great opportunity that would be if you came to MIT! This stands in stark contrast to ten years ago, when you were supposedly taken to MIT Medical if you happened to accidentally fall in while sailing.

So, as implicitly promised last time, some pictures of Barcelona. 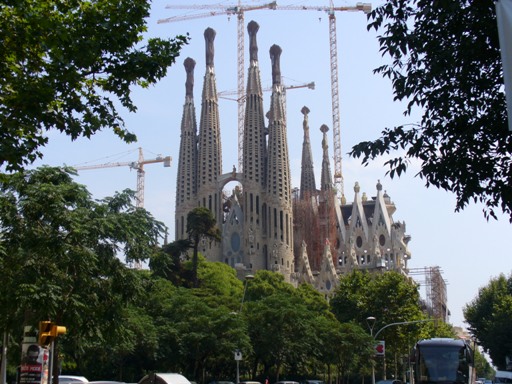 The first thing we saw was pretty much La Sagrada Familia, an unfinished masterwork of a temple by 19th-century genius Antoni Gaudi, which was immortalized in a masterwork of a song by 20th-century genius The Alan Parsons Project. The temple was started in the 1880’s and is expected to be finished by 2025, although this doesn’t seem really likely to me, considering that Gaudi’s plans have it eventually being about twice as tall as it currently stands. What you see in the above photograph is actually just the entrance.

You may think that the picturesque nature of the above photograph is ruined by the construction equipment in the background. In that case, uh, don’t even bother applying to MIT. Not gonna lie.

Anyway, admission is 8 €, and I’m not sure how Jesus would feel about that, but we still went in, because making donations to major modern art projects is always cool. 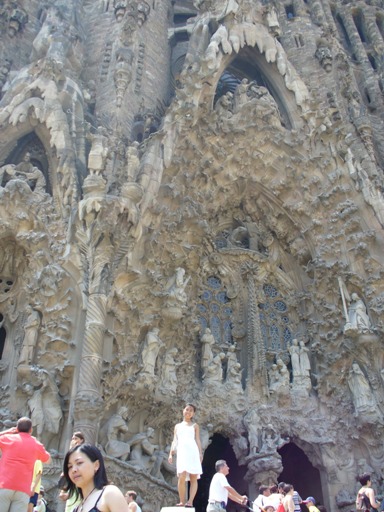 Ling ’07 stands in front of the Nativity Facade. And now you have seen about as much of the temple as Gaudi saw before he was struck by a train 80 years ago. I think it’s amazing that he even conceived of this weird, melting architecture over a hundred years ago–I would have guessed it was a lot more recent. Since Gaudi left no detailed plans, various architects have picked up the construction and lent their own, more modern touches to the work. Thus, according to Ling’s Frommer’s Guide, the more classical facade above stands in contrast to the “agressive cubism” Passion Facade. 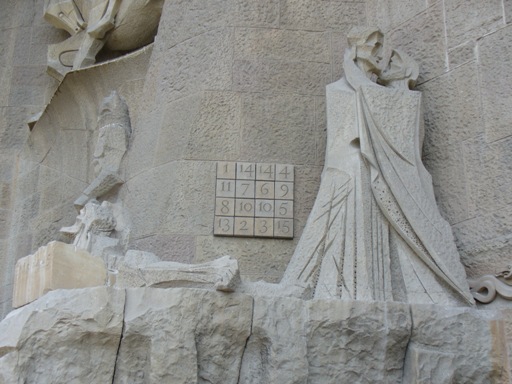 I chose this picture to illustrate this concept, not because it is particularly agressive or cubist, but because this is an MIT blog and there is a magic square in the picture, so I figured you’d all be excited about that. This magic square is actually a recurring motif throughout the Passion Facade, although I can’t figure out what is significant about it other than the fact that it sums to 33. 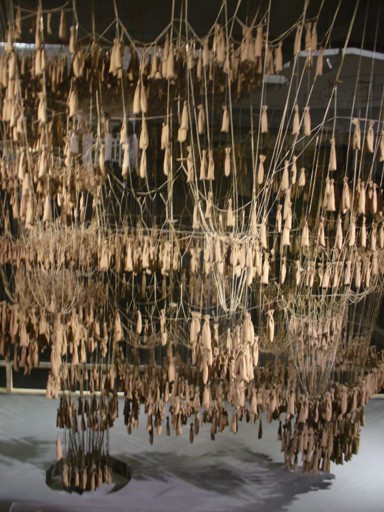 Okay, this is also really cool. Apparently Gaudi discovered that the catenary curve, which is the shape a string hangs in when you hold it between two supports, has some kind of excellent load-bearing properties. So he designed the entire interior of the cathedral upside-down, hanging from strings, and then filled it in with a plaster model.

In 18.02: Multivariable Calculus, there is supposedly always a really hard problem on a p-set where you have to derive the shape of the road that square wheels would roll on, which also happens to be a catenary. I took 18.022 myself, a more different, kind of absurdist version of multivariable calculus taught by national icon Hartley Rogers. 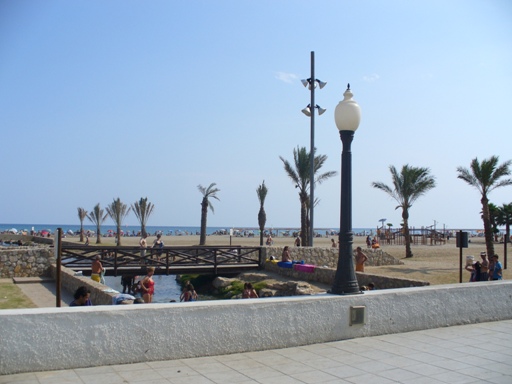 After La Sagrada Familia, we took the train about an hour out of Barcelona to this lovely, lovely, lovely lovely beach, that was way better than all the beaches near downtown Barcelona we tried over the next two days. The water was warm, clear, and blue, the sky was clear, and the sun was not oppressive. And, unlike Nice, the beach was made of SAND. I even managed to get a lady to watch our stuff with my nearly-nonexistent memory of high school Spanish (“Puede Ud. mirar? [points to bag]). I have a feeling even that wasn’t right, but she seemed to understand, even though everybody in Barcelona actually speaks some Catalan dialect, which I suspect they all might just be making up as they go along. 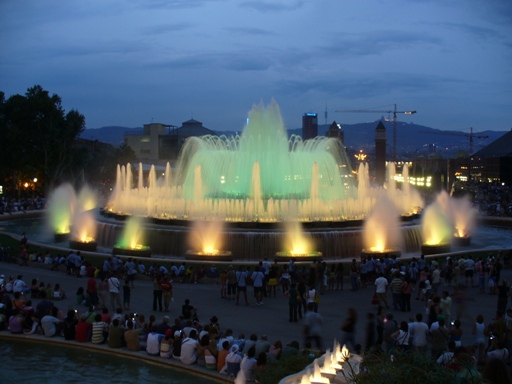 When the beach got a bit too cloudy, we headed down to the Museum of Catalan Art for a unique fountain show at 9:00. We weren’t really sure what was going to happen, but everybody we knew who had been to Barcelona had told us something along the lines of, “There’s water! Shooting up! And there’s music! And, like, they go together. Whoa, man.” Which is about as well as I can explain it to you, also–basically, they synchronize the activity of this fountain and its surrounding lights to correspond to the strains of “Also Sprach Zarathustra” and Beethoven’s 9th. It’s way cool! 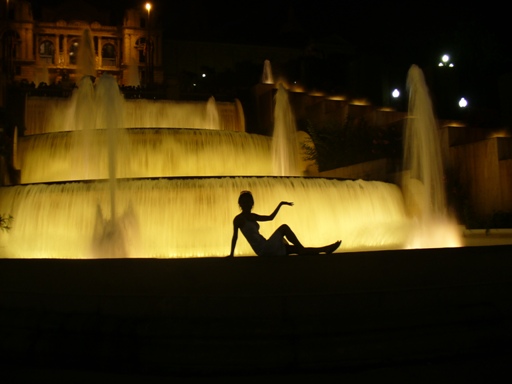 Also, there are a ton of fountains along the gazillion-step path leading to the Catalan art museum. I took this picture of Ling, which I think might be the best picture I have ever taken. Actually since the whole picture was Ling’s idea anyway, I was simply the mere vessel through which her genius flowed.

Later that night, we went to the Harlem Jazz Club, which was interesting because the band spoke in Catalan, but sang in perfectly accented American English. After a night in a pretty good hostel (with free internet access and all-you-can-eat breakfast, but no bed linens), we headed over to the Picasso museum. I never really got Picasso’s cubism, probably because I am stupid, but I nevertheless appreciated almost all of the paintings there (none of which could be photographed). One thing I really liked was the opening exhibit, where they highlighted a bunch of sketches of men, women, fauns, and demons, and then showed the giant-scale carvings that he made using these sketches. And the last exhibit, showing his entire collection of adaptations of Velazquez’s Las Meninas, was transcendent. Transcendent is a word that I overuse, I think. 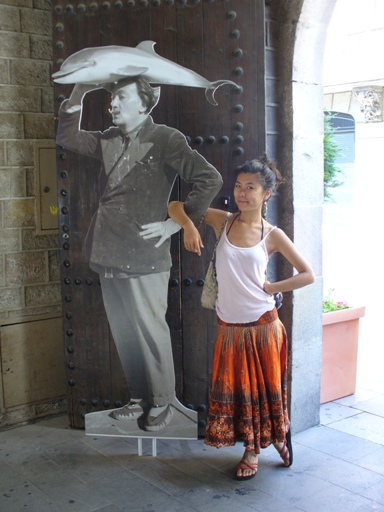 However, we didn’t find anything Dali-related in Barcelona, except a gift shop and this cardboard cut out that you could take a picture of. We saw this place walking around Las Ramblas, where we had a beautiful experience with a cembalo-playing street musician and a few quiet moments amidst the bustling tourism of the downtown area. After a long time rambling, we finally settled down at a paella restaurant. Having always been afraid of having to dissect my food (even buffalo wings creep me out a bit), I ordered the chicken-only paella. Ling, however, displayed more courage, and got one with seafood also added. 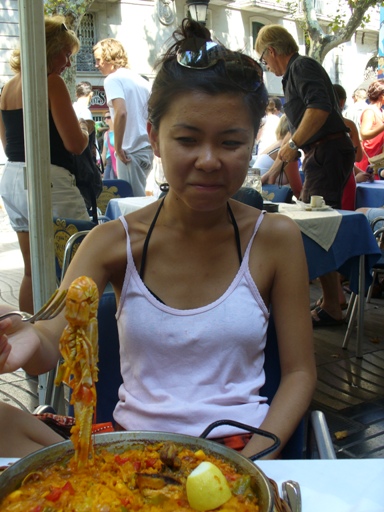 And, well, I think this is where things started to go downhill for us.

7 responses to “The train in Spain is ungainly, take a plane”