The View From the Other Side of Hell by Chris S. '11

If MIT is a 400-meter race, am I really at the beginning of the home stretch? :( 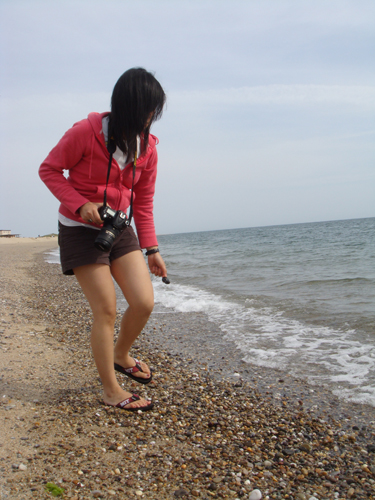 Two days ago, Sophia ’10 drove Kathy ’10 and I to Cape Cod, where we spent a blissful afternoon walking around Provincetown. After a refreshing nap on the beach and on the drive back, I remarked, “It’s so nice not having any work – normally if this was any other weekend during term, we would be worrying about how much stuff there is still to do tonight.”

Five days ago, I was tucked away in a lounge on the third floor somewhere on MIT campus, frantically studying for my impending final on Thursday. I had not done anything fun since Saturday afternoon, when I hunkered down and started studying for my four finals this semester. Over the next five days, I put in 50+ hours of solid, sweat-n-tears work for my finals, left my dorm at 8:30 AM and returned at 3 AM daily, and generally had close to zero human interaction (with the exception of a really nice custodian that would always come by around 2 AM that I got to know pretty well for the next few days – seriously!).

I also had not blogged much this semester, and this term also broke the record for me in terms of not traveling to NYC at all. That’s saying a lot – considering I probably spent upwards of several weeks over the last three years (I feel old :( ) being in NYC during term on weekends, longer weekends, and Thanksgiving/spring breaks.

So what did I spend my time doing? Here’s a snapshot :) Consider this my obligatory picture post, long overdue :P 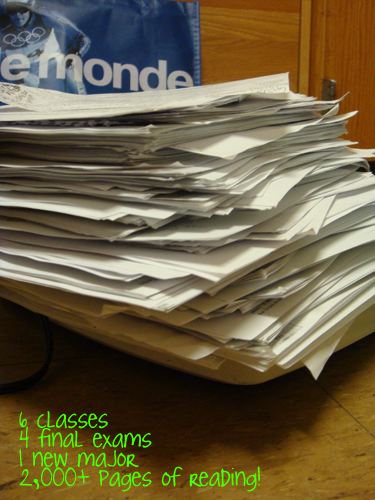 Every once in awhile, you come to MIT and you hear of kids here who take 8 or 9 classes in one term…

…but I discovered from trial of fire that six classes is A LOT – I took two science classes and four history classes. Now before you all engineering majors berate me…

Yo engineering majors I’m really happy for you and imma let you finish, but if you go through MIT pooh-poohing the humanities classes, you will have missed out on some of the best professors of all time. OF ALL TIME.

But no, seriously – all of my history classes were taught by crazily-awesome professors (including this character), which will be detailed in the entry where I explain why I declared a history major at MIT, so you’ll have to wait to hear that story. Suffice it to say that declaring a history major on top of biology is a tremendously good idea and one of best decisions I made here (despite writing six papers totaling 88 pages this semester! i feel like i need to go adopt a tree now). I did have also have four finals this semester, which was perhaps a little bit more intense than I anticipated (I rarely even had four in high school). But it’s all good – the race had been run, and the good fight had been fought. 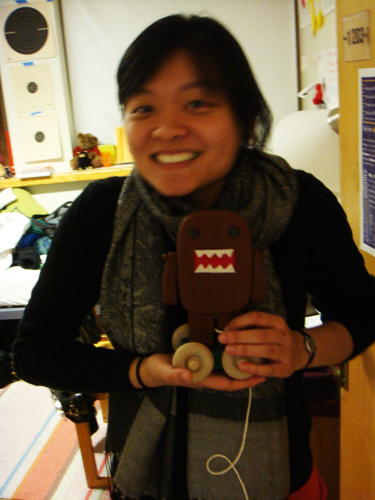 Isn’t that domo-rolly thing one of the most awesome things you’ve seen? HAHA. Made by the same Kathy as above in the extremely hyped toy design class at MIT – 2.00b. See when Snively took it! (2008). By the way, the rolly-thing is not the final toy. It’s the first project in the course designed for students to get to know the tools that they’ll be working with later on, but I think it’s always pretty awesome to see what people come up with :) 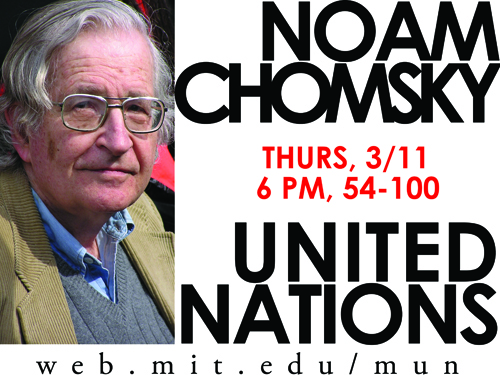 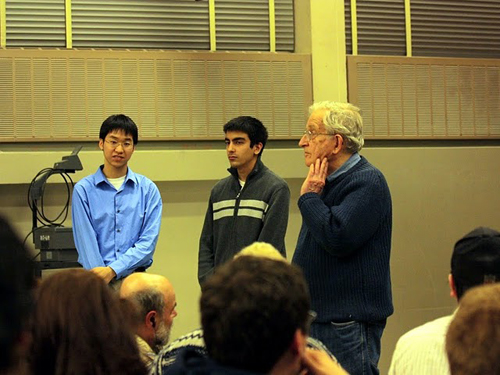 We (MIT Model UN) invited Prof. Noam Chomsky to come and speak for us in March! If you don’t know who he is, google him right now. start here. 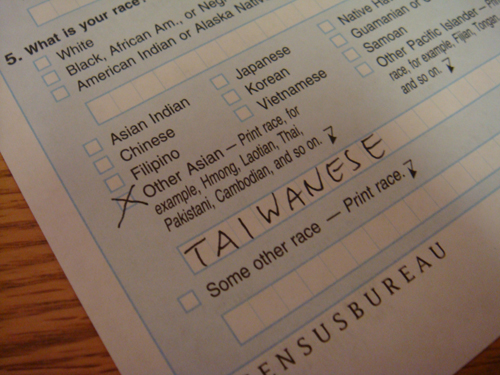 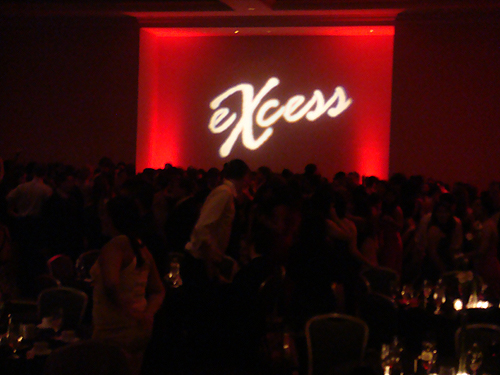 Went to Senior Ball! SO FUN. Senior Ball is basically the last big social event for seniors before they graduate, and I was fortunate enough to be invited to attend! :) It’s a great night filled with pretty good food, and A LOT of dancing afterwards. The level of partying that happened this year has definitely jumped up a notch, especially this semester, haha.

CAN I SHOW YOU SOME FOOD PICTURES? PLEASEEEE.

(I’m going to show them to you anyway, cuz this is my blog. haha) 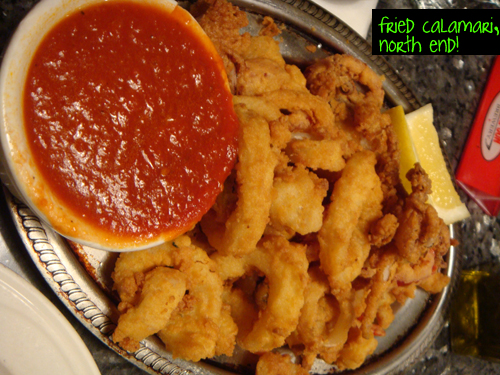 Boston’s North End is famous for its Italian food – this is a sample from a restaurant that we waited in the March cold for 1.5 hours before getting in. It was well worth the wait. 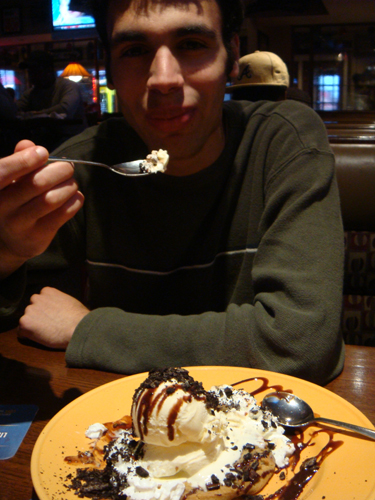 My ex-roommates (Steve and Zach ’11) love Applebee’s, so this is the obligatory Applebee’s picture. We really should take a picture of Bartley’s Burgers too, I think we’ve been there 4 times just this one semester. haha. 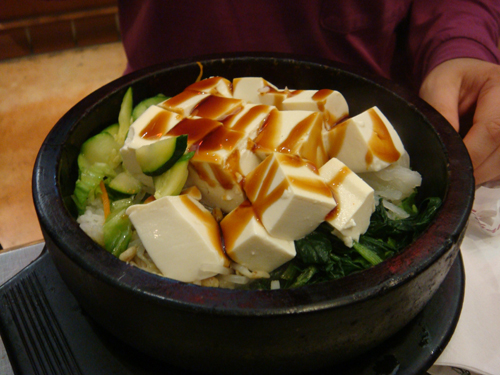 Have you ever seen a tofu bibimbap? I chanced upon this really cool discovery courtesy of my vegan friend. I thought a tofu bibimbap would essentially be a contradiction in terms, but I think it’s still amazing. :) 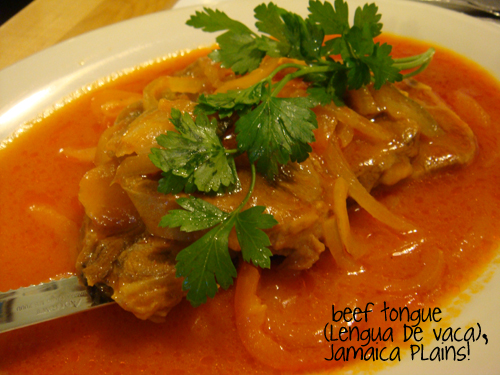 There’s also this really amazing Cuban restaurant in Jamaica Plains, a suburb of Boston. I haven’t been there since frosh year, and I got to go again this semester. It was as good as I remembered it to be. CURRENT STUDENTS – don’t graduate without trying it! :) 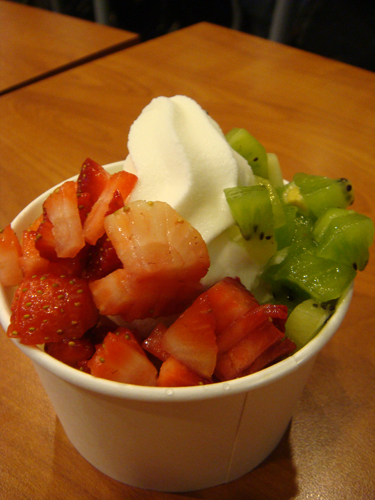 Finally, this (froyo! NOT ice cream!) makes me complete. You don’t know how happy this makes me all the time. Other than the old favorites of Berryline in Harvard Square and the new arrival of Red Mango by Symphony Hall in Boston, the real secret is that the best froyo comes from this Korean dessert store in Allston. Poke me if you want to go. :P

(by the way, strawberry+kiwi is the best froyo combo of all time. OF ALL TIME. strawberry+kiwi+mango tastes as good as it looks, but 3 toppings is usually not too economical :( le sigh)

Staying on MIT campus after finals week has been interesting – it’s so quiet now that all the students have left. Will be heading to NYC via Chinatown bus on Wednesday, and then flying out of JFK (that’s one major airport in the US that I have yet to go to – that and Atlanta) on Thursday morning. Home till mid-June, with a trip to Shanghai thrown in. Then back to NYC – so excited for summer in the City! :) Perhaps this was my way for making up for not spending any time there at all this semester, haha.

Many entries yet to come about this semester!

21 responses to “The View From the Other Side of Hell”