With guest appearances by MIT's Dean for Student Life, the communist dracula, Roman lasagna, and Heisenberg.

Thanksgiving morning was a groggy smear of coffee, subway, and airport, a rhapsody in grey shattered once by an outburst of sunrise over the Charles river as the Red Line subway torpedoed into Boston at 9 AM or so. Translucent skies were glimpsed through blurring glass, weighted eyelids. 2.5 hours later, while on a plane streaming through this clear ocean of sky, I woke up and instantly felt the narcotic echoes of the ascent to 10,000 meters or so of altitude. The night before, I had primly planned to go to bed before midnight, as if MIT were some sort of fairy tale in which time had absolute meaning and humans had free will over matters of life and bedtime. Anyway: this translated into making dumplings for 3 hours, demolishing half a biology problem set, watching classic MIT A cappella performances on YouTube while sitting on Catherine ’12’s bed with a dozen other people, carrying part of my couch upstairs for no apparent reason, starting to go out for pizza with friends before remembering that I had already had dinner five hours ago, debating with Katelyn ’12 about whether yams could rot, thinking about the yam I bought 2 months ago, throwing out a yam, giving a spontaneous tour of Random hall to otherworldly (read: non-MIT) visitors, locking myself out of my room two times in one night, drafting plans to annex the Thai cafe next to Random, playing knuckle pool because nobody really wanted to walk 5 feet to get the sticks, suffering great pain in my knuckles because I did not conserve the momentum of the knuckle/pool-ball system, and finally collecting experimental data to support my thesis of inherent DDR-incompetence by jumping on (incorrect) arrows for a few J-pop-filled hours in the Random Hall basement.

Eleven hours drove by on their weary way to the wastelands of bygone travels. I landed in St. Louis on Thanksgiving afternoon, got home, and was frankly bowled over by how low the bathroom sinks were positioned with respect to the bathroom mirror. Not to mention that the kitchen wallpaper had decreased in ugliness by multiple orders of magnitude, my room appeared to have suffered an identity crisis and converted to monastic Buddhism, and the coffee table had been relegated from Moscow to Nowheresville, Uzbek within the Soviet Union of my living room. Home fit like a glove knitted for a three-toed box turtle.

Like swallowing a flashlight, the realization that followed was both uncomfortable and enlightening. More than I could have ever imagined possible, Random Hall had squarely parked itself into the space reserved for home-glucose-home within the parking lot of my soul. And should I summon the courage to compare my soul to a shopping center, then it’s fair to say that MIT bought the entire mall plus the Crate and Barrel across the street. Never mind that this is probably the most disturbing analogy I have ever penned.

Admittedly, it’s a relief to step away from college for a few days and taste the sweetness of fresh air untouched by the smog of calculus in the morning. It’s nice to live with family (briefly). It’s exhilarating to sleep 10 hours a day. It’s a life-affirming experience to sit down to homemade dinners without fearing that you accidentally poisoned your own food with salmonella.

Still, it’s difficult not to peer over the verge of regret when you think about four day weekends at MIT. Let me try to explain:

Weekends at MIT are like the soft, cushiony slices of whole-grain bread hugging an overstuffed sandwich that your doctor (the one who told you to get nine hours of sleep per night) would advise you not to eat. Weekends, along with a lithosphere of Youtube-and-Wikipedia dressing, hold your life together once you realize that you’ve piled on more credits than you can bite into, and weekends soak up the copious amounts of grease that drip from your untrimmed course notes, which are thick and richly marbled with diagrams that begin to look like bacon after a while. As a friend of mine once said, weekends exist so that the rest of the week doesn’t kill you.

I exaggerate, of course. In sandwich terms (what better terms are there?), first-semester freshman year is something that you can order at Subway without embarrassing yourself. But, you get the idea.

A while ago, I implicitly promised that I would blog about the Veteran’s Day weekend holiday in all of its photogenically-gory detail, and this I shall attempt tonight as I try to explain why MIT has become just like home, with or without the decapitated turkey.

On the Friday before Veteran’s Day, I concocted an obscenely amazing chimera of a salad with the help of Katelyn ’12. Cold noodles, carrot, avocado, mango, almond slices, lime juice, agave nectar, and red onion, blended and served at one of Random Hall’s traditional community dinners. 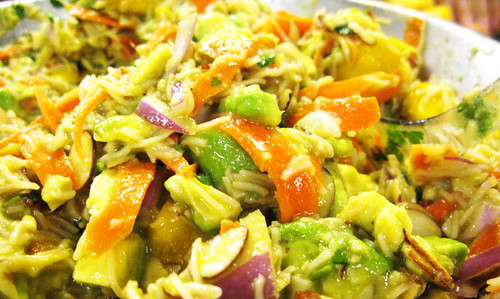 Someone else opted to cook stuffed peppers, which reminded me of certain moments in the brief and wondrous lives of Calvin and Hobbes. I chose not to illustrate my sentiments, however, as the peppers were pretty tasty. 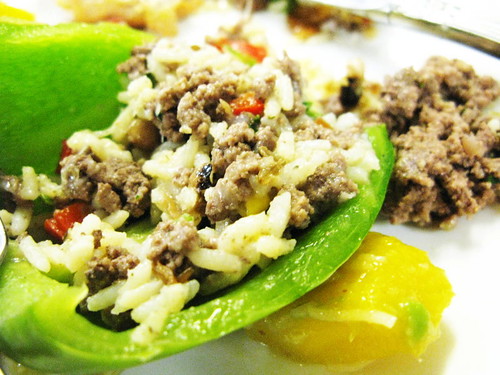 The guest of the night was none other than MIT’s new Dean of Student Life, Chris Colombo. Dean Colombo spent over two hours talking to Random Hall residents about why they came to MIT, their classes, student concerns, the woes of MIT’s dining programs, policies on hacking, and whatever else appeared in the potpourri of candid discussion. 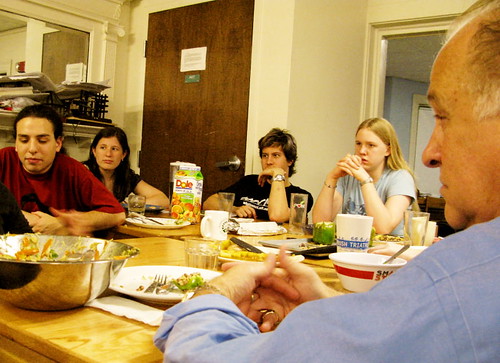 The next day, I met my advising group (FASAP) at the subway station to see a play at the American Repertory Theatre in Harvard Square. Harvard is full of squares, I thought. Luckily, I didn’t say this out loud, but I guess it doesn’t matter since I’m now posting it in my blog. 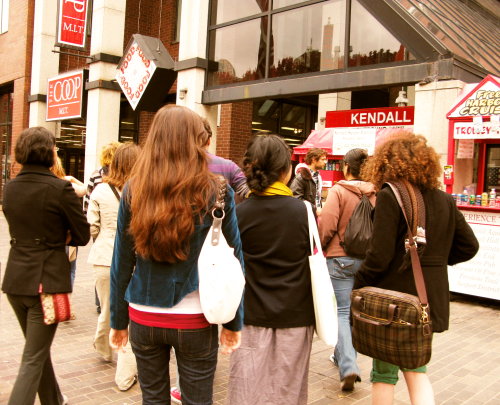 This in-transit photo I snapped of Rachel ’12 as the subway pulled up looks straight out of a Rosetta Stone advertisement. Seeing it kindles my desire to learn French. 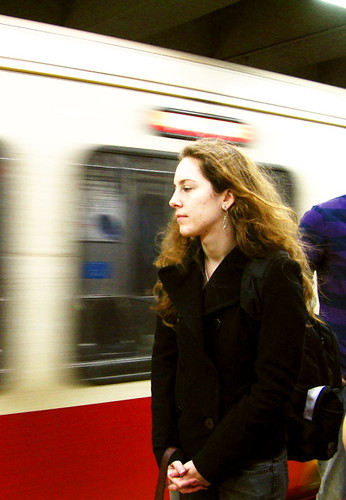 “What’s FASAP?” you may ask. This picture says it all: 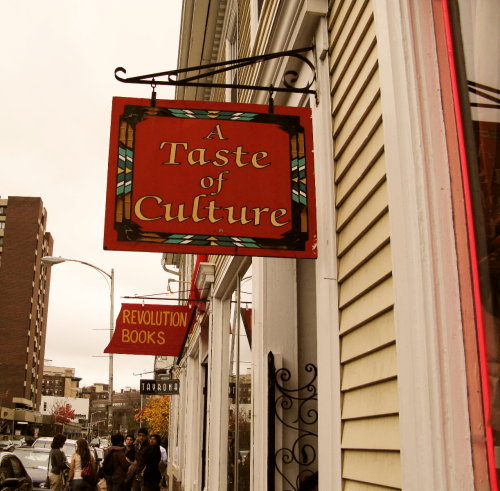 And whatever the picture doesn’t say, Maggie ’12 probably said it in her guest entry for the MIT Arts Blog. Incidentally, she chose to write about the exact same event that I will now describe only in the faintest detail, until we get to dinner. In short, the event was the world premiere of a scintillating play appropriately (!) titled The Communist Dracula Pageant. My favorite scene involved lovely, poignant folk music and a guy in a bear suit pretending to eat a pot of honey. 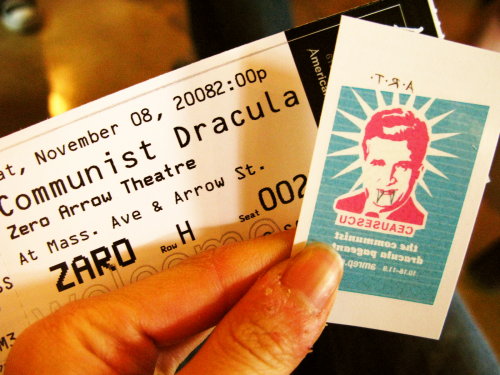 After the play, the FASAP group braved the streets of Harvard Square in search of dinner. Kim ’12 demonstrates. 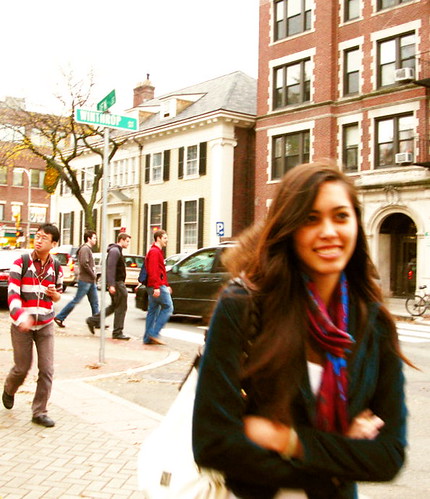 We ended up at a noodle bar with the classiest ramen that has ever seen the light of day. 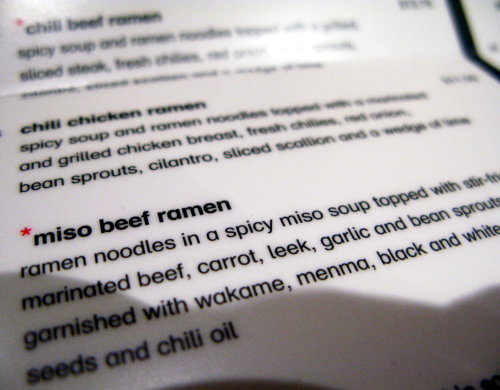 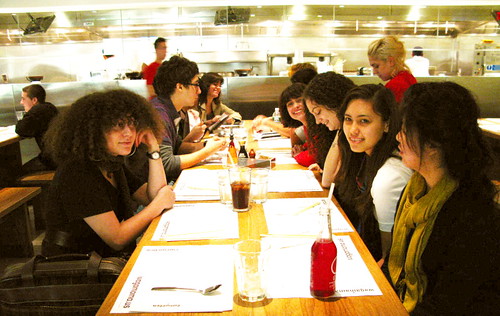 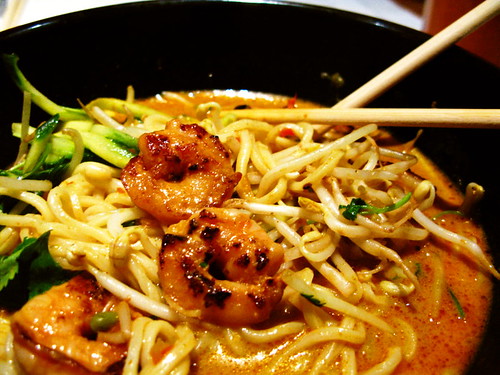 FASAP dinners are usually long and grueling ordeals, exacerbated by the burden of dessert. Here is a tortuous coconut ice cream with mango sauce and more coconut. Painful. 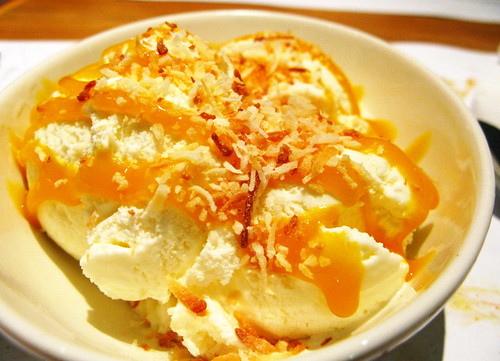 Back at Random Hall, a few residents had participated in a Microsoft-sponsored puzzle hunt earlier that day. Someone had somehow obtained some cake with a subtle reference to Portal. 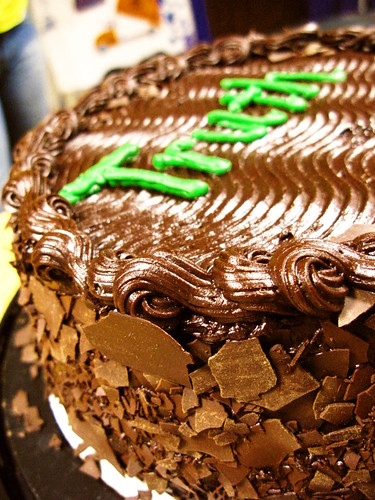 We couldn’t help but make the reference a bit less subtle. 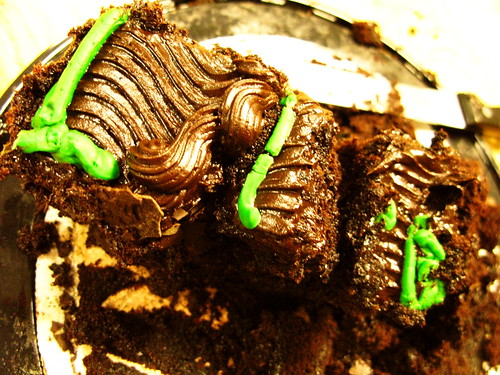 The cake worked pretty well, considering that it was from Microsoft. Residents were in consensus that it was a fully functional late-night snack. 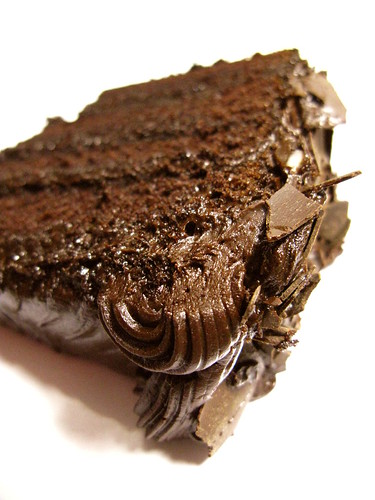 On Monday morning, I had no food for almost an entire hour, about which I will not blog. Once this dark time had passed, Paul ’12 and I led a sizable mob of Randomites on a run to Chinatown for Dim Sum. 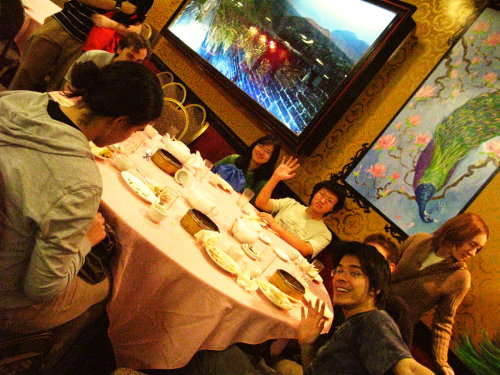 One of the perks of Dim Sum is that when you start pulling out 7 dollars worth of change to pay your share of the bill, the waitress unflinchingly hands you a saucer. Someone at our table later ran out of American currency and switched to Canadian coins, but this went unnoticed by the waitstaff. 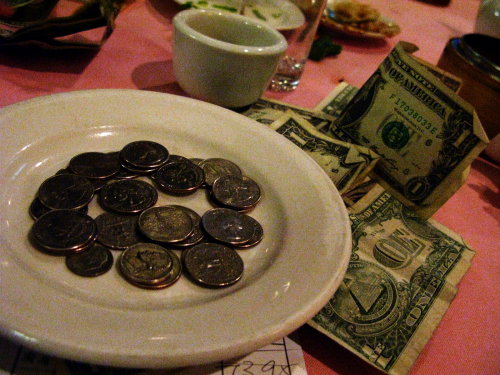 Thusly sated, we opted to walk through Chinatown, into Boston Common, down a few apartment-lined streets, across the Harvard Bridge, and finally back to MIT, where I unfroze my hands.

(Story: As we calmly strolled through the park, I abruptly leaped into the grass, pulled out a camera, and yelled “Spontaneous photo!” This resulted.) 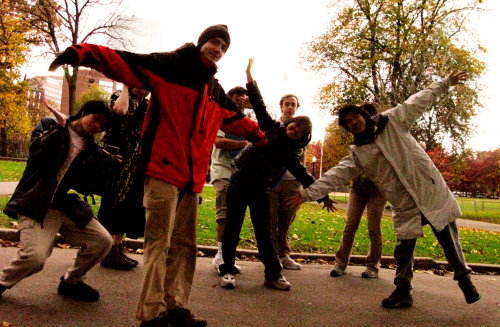 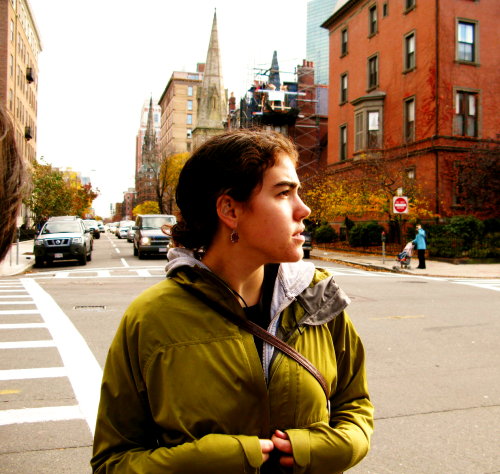 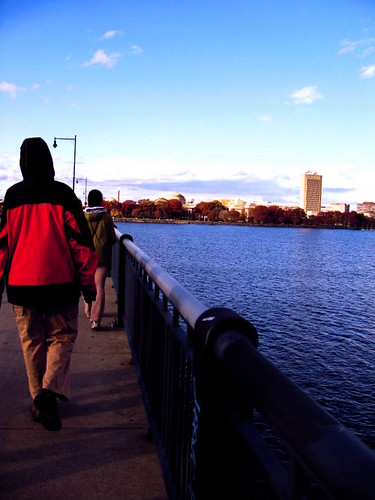 No less than three pounds of spinach, five loaves of bread, a few pans of dough, several hunks of cheese, a giant cut of lamb, a whole chicken, and unquantified amounts of onion, squash, butter, olives, and pasta greeted me as I entered the kitchen outside my room. Exciting! It turns out that Professor Anne McCants, head of the History department at MIT, was at Random for a special medieval cooking event. 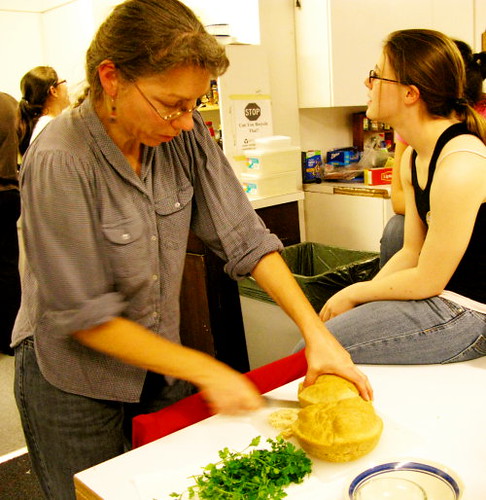 Several residents helped cook while I scoured two floors for an extra oven rack, to no avail. Dinner happened anyway, so clearly I was expendable. 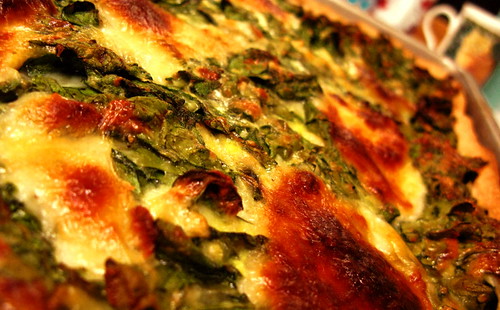 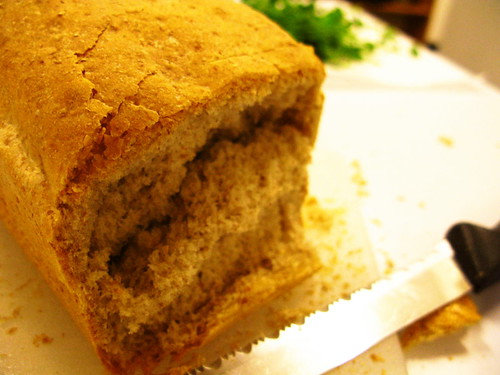 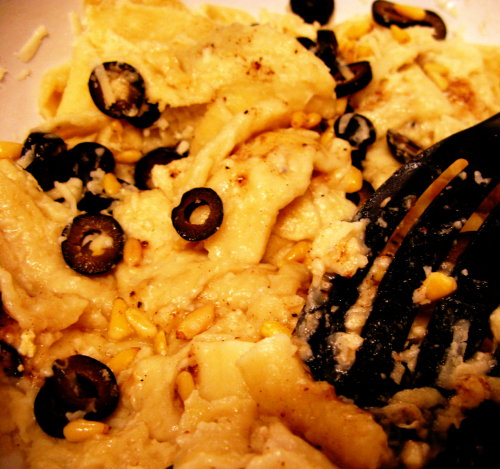 (Roman lasagna. Not red, because tomatoes are a New World plant.) 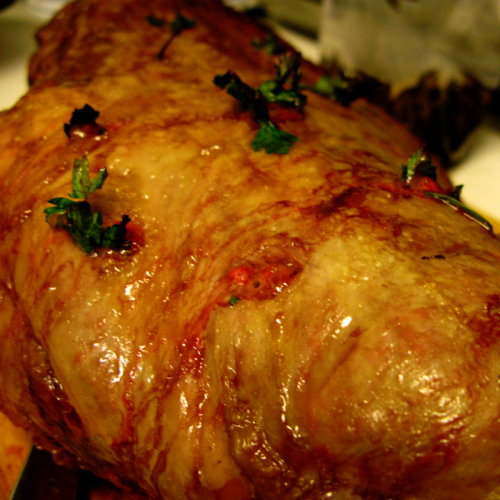 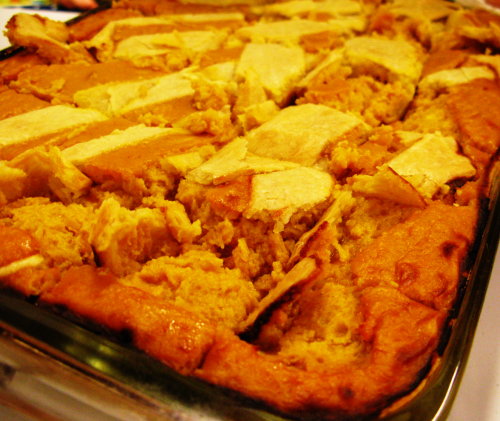 I was unduly ecstatic about having a large group of people enjoying a home-cooked dinner, drinking cider, socializing, and otherwise enjoying life the European way right outside my door (which is open, as you can sort of see in the background). It was like Thanksgiving come early (around 500 years early if you interpret “Medieval Dinner” faithfully). 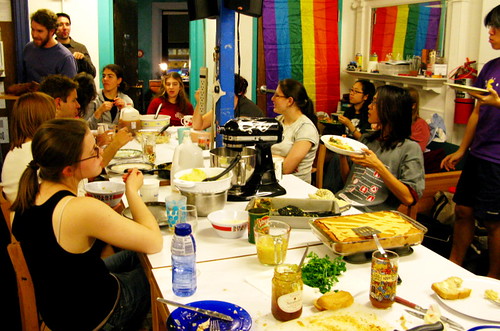 To even my incredulity, the tides of marathonic food consumption were yet to subside. Two hours and one nap later, Jeremy ’12’s birthday party commenced in a delicious fashion at Simmons Hall. Jeremy’s family lives near Boston, so his parents were in attendance as successfully prevented Simmons Hall from suffering yet another fire alarm. 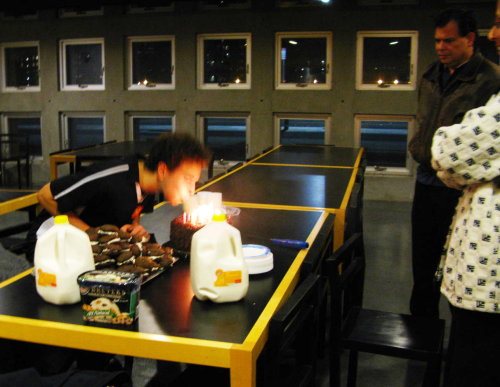 In short, home is where the heart is, unless your home is like the wavefunction of an electron, in which case Heisenberg will tell you that it’s alright to be uncertain as long as you know your home’s momentum.

37 responses to “Thoughts on coming home”