Biking! Clothing! Exploding! A day in the life.

Okay, maybe I’m reaching a little with that one. But you should still check out the entry. Stuff blows up! Things fall apart!

Ruth (’07), Matt (’08), and I went down to Chinatown for some Dim Sum at Chau Chow City, a restaurant that also features (supposedly) the world’s third largest shark fin in its lobby. Thanks to Matt McGann ’00 for correcting my memory less than 20 minutes after I posted this entry. Don’t go to China Pearl; it doesn’t have a shark fin.

The first time she crashed a bicycle in the mean streets of Boston, Ruth Miller was only a freshman. Now, granted, it was my mountain bike, which is way too large even for me, so it’s a bit difficult on city sidewalks. Still, she was doing pretty well until about halfway across the Harvard Bridge, when a strong breeze sent her swerving madly into an elderly gentleman, who apparently did about two backflips before getting back up, dusting himself off, and walking away from it relatively unscathed.

Nevertheless, after this incident Ruth swore off bicycles until last September, when she decided that it was time to conquer her fear of bikes, mountains, and New Hampshire on our dorm’s camping trip. Having the option of a day hiking up Mount Moosilauke or a day biking down grassy ski slopes, Ruth courageously chose the latter. This was the result: 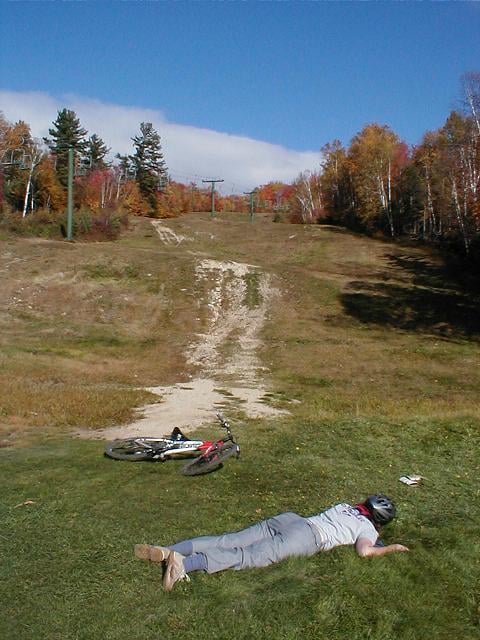 She apparently picked up the habit again while I was away in Philadelphia, this time on Matt’s more manageable bike. Things went pretty well until she was heading down the sidewalk by the BU Bridge and became momentarily distracted by a man in a University of Georgia t-shirt. Unfortunately, it only takes a moment to crash into a chain link fence and cause massive internal bleeding in one’s left leg. There was no blood clotting, thankfully, so she was able to walk it off after a few weeks.

In Jaws IV: The Revenge, a marine biologist apparently opines that “if you don’t go right back in the water after something terrible happens to you, you might be too afraid to ever go back in again,” and so despite the 8-inch purple gash in her leg, Ruth was determined to bike down to Chinatown. And let me say, for a girl who’s been so spectacularly injured in the few times she’s tackled the simple machine, Ruth has no fear biking. In the 2.6 mile stretch of road from 77 Massachusetts Avenue to 9 Tyler St., Ruth sped through two yellow lights, cut off a tour bus, and biked backwards down a one-way street. How cavalier, Ruth! Just imagine how exhilirating it is to keep up a renegade who’s cutting off a tour bus when you’re trying to maintain a safe following distance of fifteen feet. No, really, think about it. Anyway, if you ever see this person coming at you on a bike, steer clear. Not just for your own sake, but for hers. Think of the children.

Also, you shouldn’t be driving in Boston, anyway.

What I’m getting at is that the trip down to Dim Sum was far more exciting than the actual eating of Dim Sum. Are you familiar with it? You sit down and they place a porcelain pot of crysanthemum tea upon your table. You’re not allowed to pour any tea for yourself unless you pour someone else’s first, or Shannon Dong will kill you. Then you obtain your nourishment for the afternoon by flagging down one of the many carts of food careening through the aisles and pointing at the nicest-looking dumplings on them. Sometimes, if you have someone there who speaks Mandarin, you can actually figure out what you’re supposed to be eating. In this case, we weren’t that lucky, but we’ve been to Dim Sum enough to know that the doughy pork buns are good and the beef tripe tastes just like a meaty fruit roll-up. The good news is that the plates of dumplings are small and cost about $2 each, so even though you win some and you lose some, you can always end up getting a diverse array of tastes. And, of course, if you find something not to your liking you’re allowed to leap onto the table and shove it down someone’s throat. That’s what Shannon would do if she were there.

In theory I should hate Dim Sum because 60% of the dishes contain shrimp, which makes me throw up a little in my mouth, but I sometimes get bizarre cravings for it. I think I’m pregnant.

The Garment District is my favorite clothing store and that is that. It’s also a fifteen-minute walk from my dorm. Sometimes my life is strangely beautiful. Billing itself as “an alternative department store,” Garment District is split into three parts: 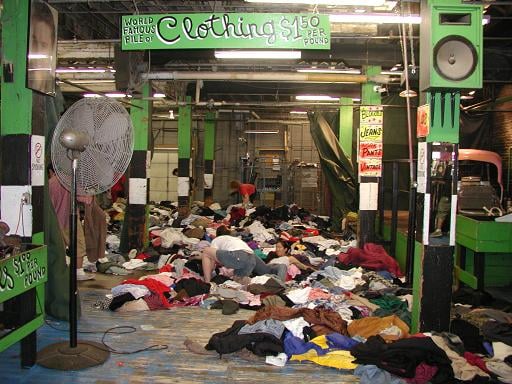 Even though it’s summer, Nicola pretended it was winter and made a clothes angel! 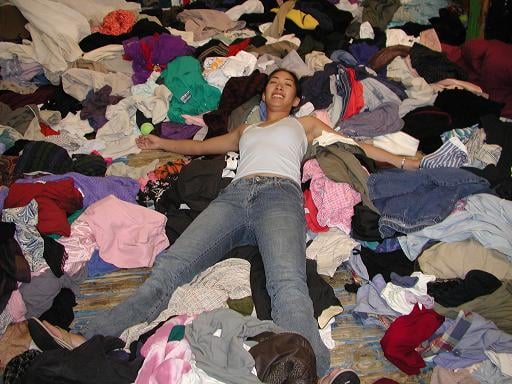 Actually, I forced her to do that because I thought it would be a cool blog picture. But, regardless of its origins, Nicola’s clothes angel filled my heart with Christmas cheer and I bought this awesome winter jacket. Guess how much it was. Just guess. Then scroll down to see. 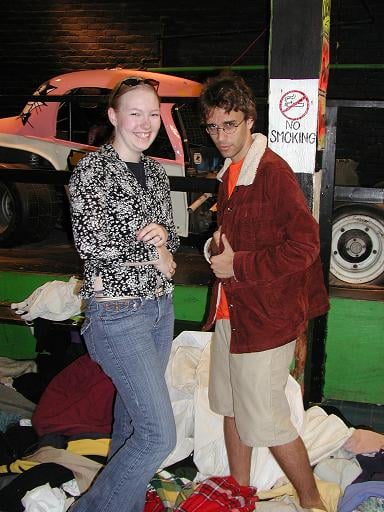 See how happy Kendall ’07 because of my savings?

This is because everything at Dollar-A-Pound costs $1.50 per pound, or 75 cents per pound on Fridays. This doesn’t really make sense to me, but I’m not Course 14, so who am I to argue with their business model? Mitra ’07, can you shed any light on this? Does it involve heteroskedasticity? If not, can you some how incorporate that into your explanation?

No, really, I love this jacket more than I have ever loved any object, place, or person in my life. Just playin’. But, seriously, isn’t it among the four or five best jackets you’ve ever seen?

Some other people also found fulfillment at Garment District:

Nicola ’07 buys a short skirt to go with my long jacket (reality changed to fit song lyrics)
Ruth ’07 wonders to where all the cowboys have gone.
Gemma ’06 is ambivalent about being named the Australian ambassador to Djibouti.

But, of course, like all of my blog entries, this story has a moral, and it’s, uh… something about finding true love in unexpected places, like a pile full of clothing.

…and then I found five dollars.

Of course, every single day in my life ends with some kind of massive explosion, either literal or figurative. On this evening, it was literal.

A bunch of people from a bunch of different class years and I drove up to Hampton Beach, New Hampshire to set off some fireworks along the seashore. Now, for all you wondering, you must know that it’s illegal to set off any fireworks in Massachusetts without a license. Think of the children. It’s kind of annoying, but once you see the show on July 4th, amateur fireworks seem a little trivial anyway.

But this blog is a time for rejoicing, and rejoice we shall, both in fireworks and in the world record largest codfish. 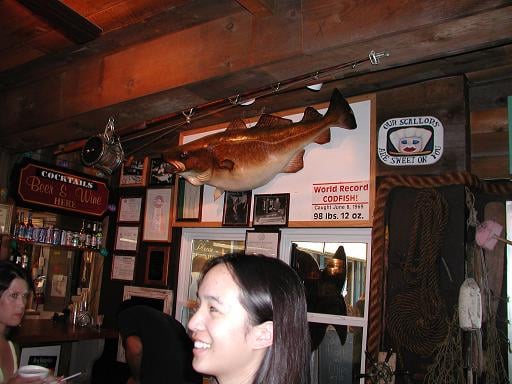 I think lobster might be my least favorite food ever. Shellfish makes me wretch in general, as do dissection foods, as do mass quantities of clarified butter, and the meat doesn’t even look that appetizing to begin with. Anyway, I got some fish and chips for dinner while everybody else had two or three lobsters. Then we ran around for twenty minutes looking for a parking meter, during which time we found a modifiedcrane game which replaced stuffed animals with live lobsters. I don’t think anybody had ever actually won it, because the lobsters looked a little unwell and there didn’t seem to be any mechanism for getting the lobsters out of the machine without, you know, having your hand pinched off or something. I’ve always been afraid of something like that.

But I digress from explosions. We shot off one googolplex roman candles (I counted), demonstrated below by Megan. 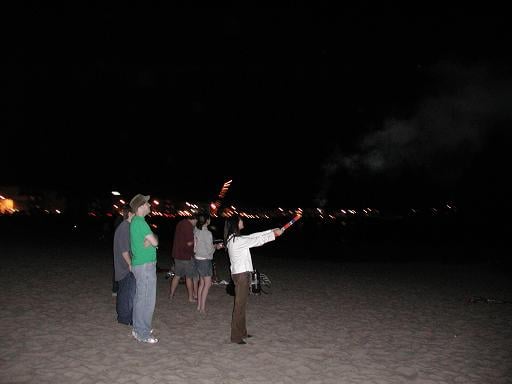 Then Mike Short ’05, a rabid pyromaniac who earlier in the day tried to break into somebody’s room in Senior House, by wedging the door open with a stop sign, handled some of the larger and more dangerous explosives for us. 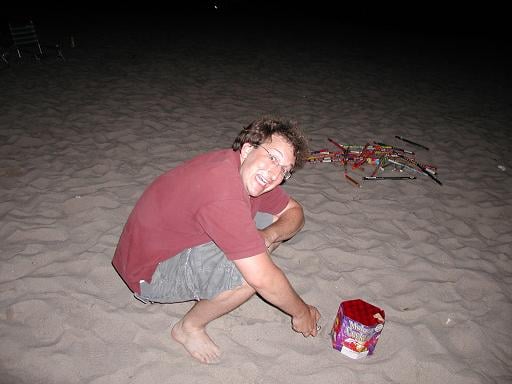 And, uh, the camera died right after that. Sorry, it had to take one for the team. But Ruth has a camera phone. This is what the thing Mike set off looked like: 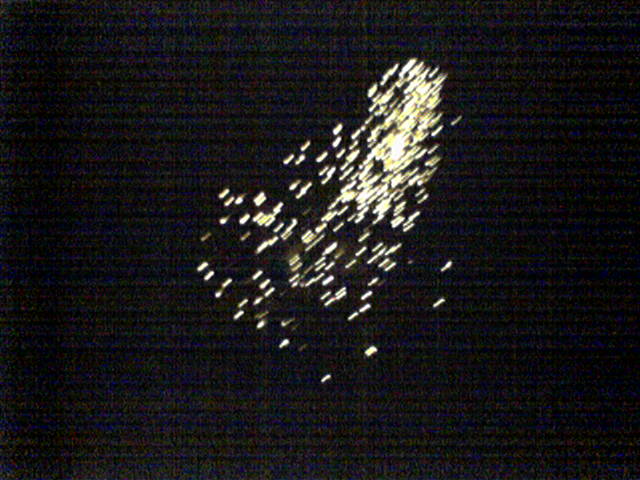 This next one is “Bush’s Missile Defense System” in action (except it only cost like 25 dollars instead of a hundred billion and it actually does something useful–it took me 20 minutes to come up with that joke). However, imagine that instead of two projectiles rising as shown below, there were about a hundred and fifty or so over the course of five minutes, and that each one made an insane screaming noise like when you step on a cat. 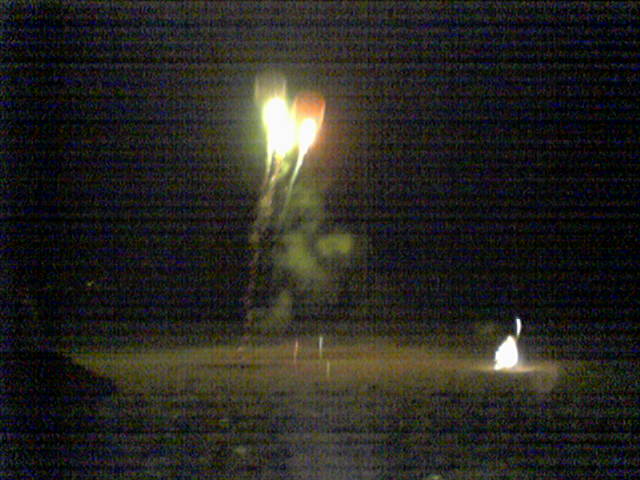 Well, that would attract the police pretty quickly, wouldn’t it? I wanted to blog the police, but they wouldn’t pose for a picture and I feared that taking one would only exacerbate the situation. Luckily, all of our mothers had instilled in us at an early age to always cooperate with law authority. Pleased to find no alcohol amidst our piles and piles of undetonated explosives, the two officers kindly let us off with a warning and told us that fireworks were illegal along the entire length of this public beach. Mike later pointed out that as they made that statement, there were at least three fireworks being detonated on the beach within a two mile radius and that all of the shop owners had given us advice on the best place to detonate fireworks.

So, beach resort folk apparently don’t like it when a screaming comes across the sky at 11 PM–and that’s fair, because we got two hours and about fifty pounds of fireworking in. So, we packed all the depleted rounds into the trash and prepared for the long drive home.

So [said the doctor]. Now vee may perhaps to begin. Yes?

Not so much begin, as Spielvogel said to Portnoy, but to continue–look out for my July 4th entry; my day was so awesomely hot that it might cause your computer to burst into flames. Go here to find out what precautions you should take, and then once you’re a student here sign up for MIT’s free three-hour fire extinguisher safety seminar.

7 responses to “Three of a perfect pair”