A Newbery-medal-winning collection of short stories.

If I could save time in a bottle, the first thing that I’d like to do is to blog every day ’til eternity passes away, just to share them with you.

Unfortunately, I can’t do that yet, but I can write these retrospective entries for you when I’m not so busy… like on the weekends. Think of it like a box full of memories.

…and the Trumpet of Coffee

On Wednesday I had marching band practice and no time in between class and work to go home and get my instrument, so I had to take it to class with me in the morning. Now, the thing is that my trumpet is on loan from the band and it’s defintely a little past its prime, so the mouthpiece doesn’t come out of it. That’s not really a terrible thing, except that with the mouthpiece stuck in it perpetually, it doesn’t fit in its case. So I had to walk around carrying a trumpet out of its case in one hand all day. Of course, I forgot that this rehearsal was actually for elections and involved no playing of instruments at all, but it was cool… I’m the new music librarian.

Anyway, since I had just pulled an all-nighter to work for twelve consecutive hours on my 10.213 (Thermo) and 10.302 (Transport) p-sets, I had to stop into the newly-redesigned Cafe Four for some coffee, which is probably terrible coffee, but since I usually avoid coffee except in case of emerency, I’m not too discriminating. Since I was, you know, carrying a trumpet in my left hand, the nice cashier–not quite as nice as Saturne, but still pretty nice–made me a proposition: “if you play me a song, I give you free coffee.” Anyway, the first thing that popped into my head was “Psycho Killer” by the Talking Heads, and I played it pretty poorly, but, still, she kind of promised me, and there were people waiting, so she just applauded politely and let me go on my merry way, now just a little bit merrier.

And then I got free coffee.

…and the Alchemist of Turkeys

Last week sometime, I got an e-mail from Andy, the grad student with whom I’m working on my UROP, saying that Terry Adams, the Chief Technology Officer of Changing World Technologies, was coming to MIT for a day and wanted to see how our research on the thermal conversion of turkey offal to see how the project was coming along. Since Andy is in Switzerland skiing all term while I slave away in lab doing all his thesis work for him, he asked me to meet with Professor Tester and Dr. Adams and let them know how my work has been going.

For those of you who are not aware, this is my job. 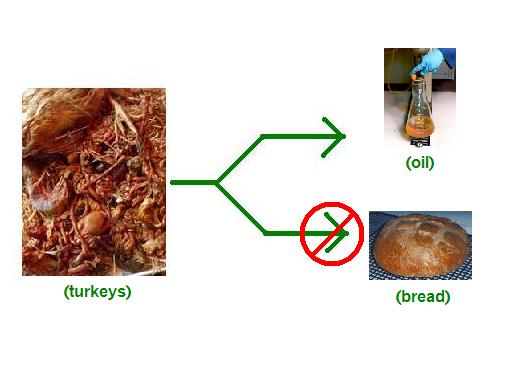 That’s not an actual slide from my presentation, though… hard as it is to believe.

Anyway, I went up to Professor Tester’s office at 12 PM, all ready to meet with him and everything, when his secretary Gwen informed me that he, Dr. Adams, Professor Modell, and Morgan, a postdoc in my lab, had all headed over to the faculty lounge for lunch and they wanted me to just come over and have a lunch meeting with them. Ruh-roh. Where’s the faculty lounge in the Stata Center? Well, Gwen gave me excellent directions, but considering that this is the floor plan for the Stata Center… 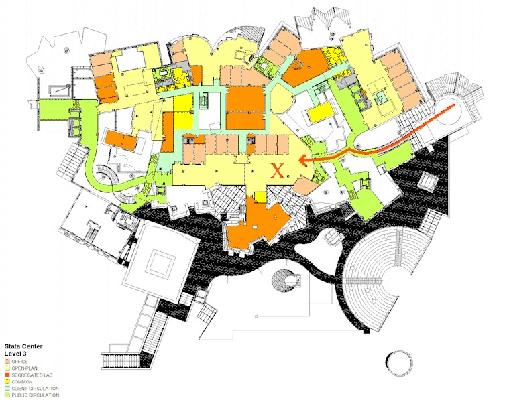 …I was a little stressed out. What I was surprisingly not stressed about, at least until I got there, was the fact that I was having lunch with a postdoc, two professors, and the CTO of a company… and that the purpose of this lunch was to basically talk about me and my research. Well, then. I started to get THE SHIVERS when I walked into the lounge, but luckily I had time to go grab some (awesome, free, cheesecake-including) lunch and compose myself before I started to talk.

My part of the lunch did go pretty well… I think I generally gave the impression that I had some idea of what I was talking about. I also got to learn some really interesting things about my work from Professor Tester and Dr. Adams. For example, a grad student in my lab found out about 20 years ago that there’s a limiting factor for Maillard formation as a function of temperature–that is, if you bake bread at too high of a temperature, you won’t get any crusting at all. Perhaps the same thing is true for turkey carcasses. I also found out from Dr. Adams that Changing World Technologies now deals not only with the thermal depolymerization of turkey waste, but also takes destroyed cars and converts much of the organic material on their interiors into oil while precipitating the heavy metals.

But “Destroyed Autos vs. Spam” just doesn’t have the same ring to it.

…and the Mom of Sam.

Last weekend was MIT Family Weekend, which is a great opportunity for MIT students to hang out with their parents or their friends’ parents, so Sam’s Mom came up to visit her only son. We had just a great time; we went to Vinny T’s with 27 people, we shopped unsuccessfully for a chair, and we bonded while making meatballs. Actually, Sam’s Mom just made meatballs for me. But they were among the best ever–far better than I’ve had anywhere in Boston–despite her repeated complaints that she didn’t have “her ingredients.”

We also found out that even in the People’s Republic of Cambridge, known for its “famously liberal politics,” that some people still have drive SUVs: 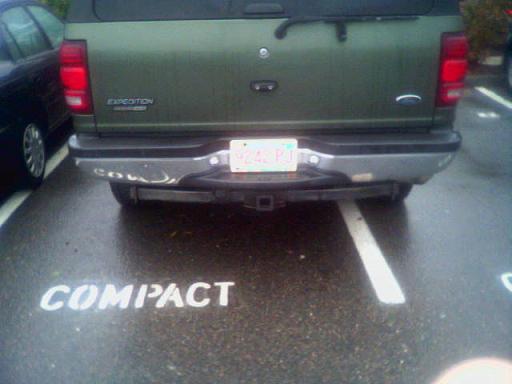 But perhaps our greatest adventure was heading out to Arlington to check out the Blue Ribbon BBQ–though she’s usually up for walking, Sam’s Mom was looking for somewhere car-accessible on account of the driving rain. The brisket and pulled pork sandwiches we had were excellent, but, once again, life is about the journey, not the destination, so we actually had all of our real fun getting there. As you may know, 77 Massachusetts Avenue looks like this: 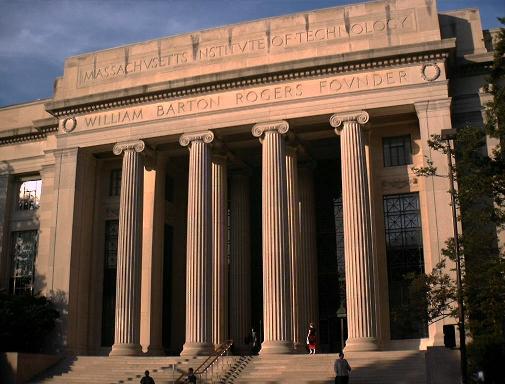 …and is where you should mail your application to MIT, I think. So, by the time we had reached 2600 Massachusetts Avenue and still had seen no sign of Blue Ribbon BBQ or even of Arlington, we were becoming a little worried. Luckily, Google Maps had reminded me that street addresses in Boston make no sense–it turns out that when you get into Arlington, the numbering on Mass Ave just randomly starts over. This is okay, I guess–numbering also starts over when you cross the Harvard Bridge–but it does mean that some poor person could be walking around trying to find 742 Mass Ave, only to find that they’re about 6 miles and two towns away. Also, streets sometimes change name when you change town, and steets in different towns with the same names can actually be nowhere near each other.

3 responses to “Time in a bottle.”