Wonderful things happen that I can organize around a coherent theme. Also, I didn't lose my umbrella.

This was a great day. Take my word for it. What, do you want me to prove it to you? Aww, here goes.

Today I ate a grape lollipop that SaveTFP (an ETLA) was handing out in Lobby 7 and I wondered about the rate of grape flavor diffusion into my mouth. Specifically, I wondered how I could best agitate my mouth (using my tongue as an approximate Rushton impeller to dissolve the aromatic flavor compounds in my saliva, assumed to be a Newtonian fluid). I was in the middle of calculating the kLa when I grew impatient and consumed the rest of the lollipop in two swift chomps. Freedom is the best sauce.

Then I got the best comment on the 10.213 test I got back today. “Sam, please write neater. It’s hard to read your hand writing and we want to give you all the points you deserve.” I’ve gotten a lot of similar comments on my hand writing ever since first grade, but this is by far the most polite and complimentary. It’s nice to see the TAs showing me a little TLC.

After work, I went over to W20 because LSC, a undergraduate organization that shows second-run movies in stereo for $3 in 26-100, had invited the MIT Marching Band (MMB?) over to play their traditional fanfare before the coming attractions. After rehearsing for about an hour, we went over, stood up in front of the crowd, and played our triumphant eight measures with tremendous gusto but no sousaphone (where were you, Jeff?). As an added perk, the nine of us got the opporunity to see War of the Worlds for free–a premium discount on the already low, low price of admission. Well, that sits well with me, if not perhaps the IRS.

Sadly, I didn’t get to watch a bunch of people send out an SOS or a pre-FUBAR Tom Cruise, because I had already made plans to go over to Nightmarket, an Asian-street-themed festival sponsored by–stay with me here–AAA, ATS, and CSC, and also featuring KSA, JAM, VSA, and pretty much any other group of AZN‘s that managed to get ASA funding. There was no TKD, though.

Nightmarket is fantastic. For two dollars, I got a bowl of green beans, a plate of spicy basil chicken, half a scallion pie, two potstickers, and a scoop each of green tea and red bean ice cream. I also got to see a great alternative band and a really, really terrible Nirvana cover band that would have really made me LOL if they weren’t so sad. I wasn’t really paying attention to them, though, because I was busy playing DDR with Javier ’08. Earlier in the night, Javier had taken some pictures of Gloria ’08 and her performance in Dance Revelasian, which probably never abbreviates itself DRA, but I’ll do so anyway just to keep with the theme of the entry. Here’s Gloria. 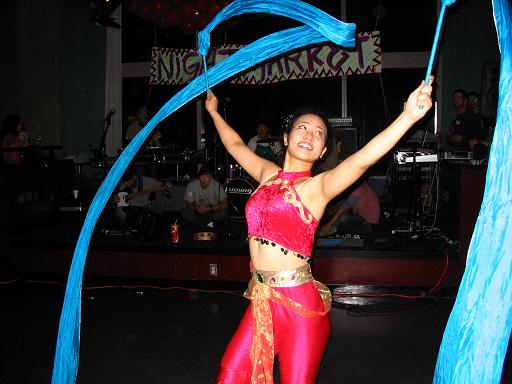 I must say, this picture can only capture, at most, one ten-thousandth of the grace that Gloria exhibited during her performances tonight. Her ribbon and fan-twirling seemed nearly effortless, especially given the unseasonable warmth of the evening. Also, there were game booths where you could try your luck for the chance at winning a fortune cookie. Certain fortune cookies were stuffed with redemption slips for fabulous prizes. My suitemate Gabe ’08, by playing basketball continuously for 30 minutes won over a dozen stuffed animals, two $25 gift certificates to different restaurants, and $200 worth of hair color and perm gift certificates to the “Unique 8 Salon.” I just got a fortune that said “IHFTP” (an FLA?).

Therefore this was a great day.