This is not the best joke in the world... actually, maybe it is.

Rather than working on the 12-page paper on green fluorescent protein that I need to have written by tomorrow, I spent the afternoon in the student center enjoying a matinee of the Musical Theatre Guild’s production of Star Wars Trilogy: Musical Edition. Of course, since the production was covered in the Boston Globe and slashdotted, MTG had quite a larger turnout than they expected. Luckily, I reserved my 12 tickets early… here’s what the poor unfortunate souls on the waiting list looked like: 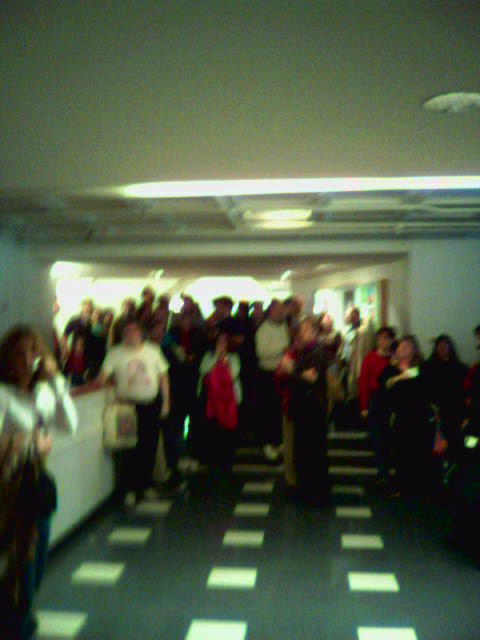 The entire production was glorious, but beyond the “Amadeus,” “Top Gun” and “Jetsons” references, the tap-dancing stormtroopers, the running “ew, I kissed my sister” joke, the random operatic soprano belting “Phantom of the Empire”, beyond the working Jabba the Hutt puppet, X-wing costumes, lightsabers, trap doors, and moving AT-AT legs, beyond “Don’t Cry For Me Princess Leia” and “When You’re Good to Jabba” and “City on a Cloud” and “One Night in Bespin”, and beyond the amazing blue / white / red lighting at the end of “One Play More” and the perfect recreation of Jerome Robbins‘s “America” choreography by Jawas, one moment in “Act V: The Empire Strikes Back” stood above the rest of the four-hour production. Though I’m going to see The Aristocrats at LSC next weekend, I’m afraid that this may have already claimed the title of “best joke in the world.”

It’s was so good that I’m actually, for the first time, going to include spoiler space in a Turkey vs. Spam entry, just in case you were planning to go see the show next weekend and don’t want it ruined for you.

LUKE: I admit it, you are better than I am.
DARTH VADER: Then why are you smiling?
LUKE: Because I know something that you don’t know.
DARTH VADER: And what is that?
LUKE: I… am not left-handed! [switches lightsaber to right hand]
DARTH VADER: [immediately cuts off LUKE’S right hand] “You are now.”

Despite this utterly brilliant scene, which recieved at least 10 seconds of spontaneous audience ovation, like it was Happy Days and Fonzie just walked in or something, my GRT Chris noted that they actually missed the opportunity to incorporate this gem earlier in the scene:

LUKE: Hello. My name is Luke Skywalker. You killed my father. Prepare to die.

If anybody from MTG is reading this… you’ve got three more shows to put it in! And “splendid job” to everyone involved in this semester’s production–it was truly an excellent afternoon/evening.