DID YOU KNOW? After failing to acquire MIT no less than 3 times in the early 20th century, Harvard used a substantial grant from George F. Baker to establish a school for engineering in Cambridge. This college is now known as Harvard Business School.

Today is a “virtual Monday” at MIT. Unlike most colleges, we get President’s day off despite the fact that it sometimes occurs a mere nine days into term. However, since we get so many Mondays off during the spring semester, today we are actually following a Monday schedule… even though it’s Tuesday.

Just think of how fascinating an entry this is going to make!

Well, it turns out that MIT is such an important institution in the scientific community, the global society, and the fabric of reality, that if it changes its schedule for even one day without telling people, things all over the world start to unravel. Three totally crazy things happened yesterday, and I totally blame/credit this whole “Tuesday is the new black” with the generally bizarre happenings yesterday in this ever changing world in which we livin’.

Lawrence H. “Intrinsic Aptitude” Summers ’75, President of Harvard, resigned! This was so important that I had to wake Mitra up from her nap to tell her. Now, I like to keep this blog pretty much politically neutral on all issues except one, but I’d still like to paraphrase a particularly excellent quote from VooDoo, “MIT’s only intentionally humorous campus publication.”

“Opposite [President Hockfield] stands the scholar, Senior Haus alumnus Larry Summers, who is living the MIT dream and running Harvard into the ground…”

Caroline, my friend from marching band, and one of like the five coolest people on campus, moved up to the top two or three when she showed me this birthday card that she has signed by JONATHAN SAFRAN FOER! 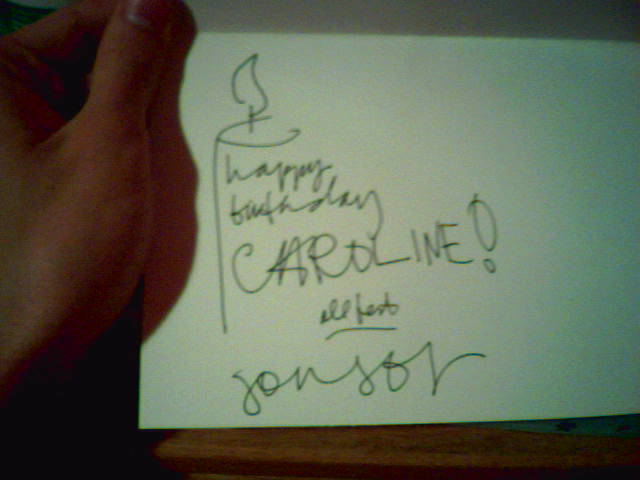 Have you read Everything is Illuminated? If not, stop reading my stupid piece of horse dung blog and run out and buy it. Seriously. It’s totally the most fantastic and ethereal book that I’ve ever read in my admittedly short life.

“Hush, and then: the curtains of clouds parting, the hands of thunder clapping. The universe poured down in a divine onslaught of bombing vomit.”

Anyway, the story goes that one day last year in Maryland where Caroline lives, Jonathan Safran Foer came down to do a signing of his second, vastly inferior novel Extremely Loud and Incredibly Close. Caroline was totally unable to go for some reason such as sickness or being at MIT or something, so her parents went to it. Realizing that it was Caroline’s birthday that very week, they bought a “Hidden passions of chocolate” card from the nearby gift shop and took it to Jonathan to sign. A week later they sent the card to her, and a few days later they told her exactly who signed it because, you know, it’s not totally obvious.

(Sam’s Mom is writing this down.)

So I was super-tooling for 10.37: Chemical Kinetics and Reactor Design and I cracked open this text for the first time to look up some fugacity equilibrium relations. 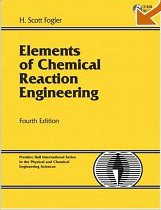 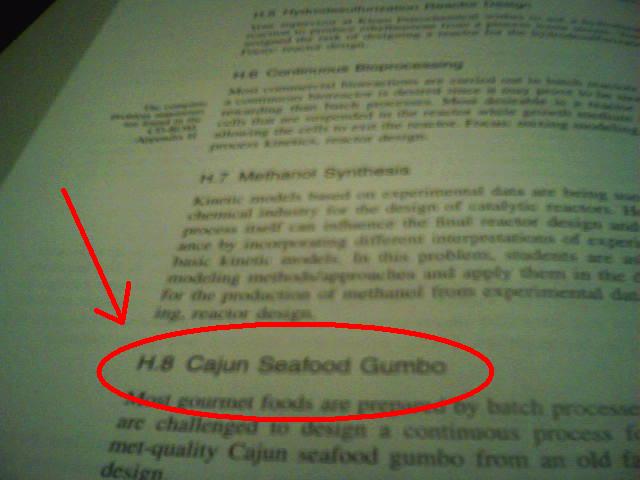 So here, right after a problem on methanol synthesis, I had the privelege of discovering author H. Scott Fogler’s recipe for Cajun Seafood Gumbo. Apparently the recipe (including time of roux baking and onion sauteing) is provided as an example of a batch process problem–given this set of cooking parameters and feed ingredients, what is the best way of making a reactor for synthesizing, canning, and exporting H. Scott Fogler’s seafood gumbo?

5 responses to “Tuesday is the new black.”