2 Kittens from mysterious origins came into my life about a month ago. They had appeared in our yard back home lonely and hungry, and in just a few days had driven my mom into incoherence. I received an enigmatic voicemail on my way out of some indie movie in the middle of summer, “Wah wah wah wah wah…” and called back in alarm. We don’t know where they came from, we don’t know who might have put them there, but they were quickly attaching themselves to my parents who absolutely refused to let them into the house but did consent to their use of the flower pots outside for midday naps in the sun. My mom had been feeding them some of her chinese cooking and in exasperation had gone to stop & shop and purchased her first bag of dried cat food ever. My dad was contacting animal shelters in the area to see which would take them.

So I heard this and even though I was sure just a semester ago that I could never take care of an animal and a cat could never love me, I figured this was just one of those things that happen and that you could either ignore and go on as you did before or embrace and let it change your life a little and that’s what I did. I asked her to send a couple pictures and said that I will take care of them til I find homes for them around here. So I took a trip back to CT in the middle of the summer to pick up the kittens. Chris came w/ me cause he’s always wanted a black cat and I had my eye on the little black and white kitten.

They were itching and itching like they were trying to take their fur out and my mom figured they had fleas. And sure enough we had the little buggers flying off the kittens in the bathtub with the first bit of flea shampoo. And a flea collar and some “Revolution” later they’ve stopped itching and rubbing up against things.

We’ve brought them back to MIT and they’re the newest celebrities in the dorm. 10 inches long from head to butt when they arrived, they’ve since learned how to use the litter box, been to the vet and had their sex determined for them (black one’s a boy and the other’s a girl), gotten the first of their 2 shots for distemper, and grown at least several inches as well. Rolls upon rolls of film have been burned on these two, but I’ll spare you. Just a couple here.

On the drive up to MIT: 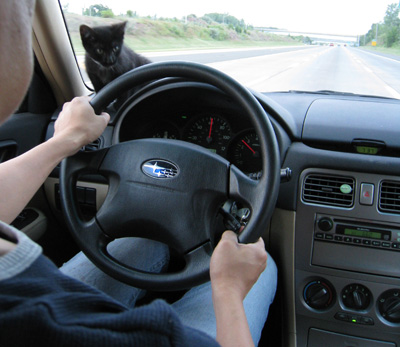 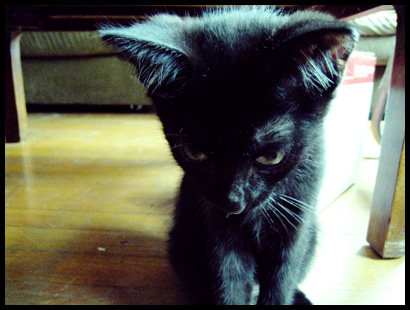 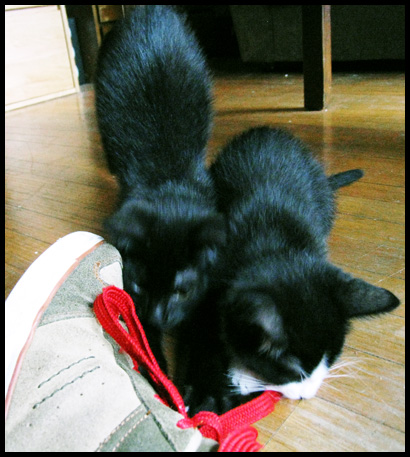 Some of what happened to colin’s computer: 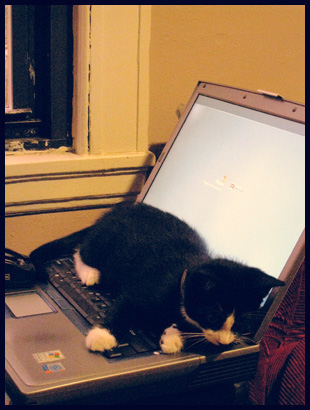 If you go into my google search records this past month it is at least 80% about cats. “Flea products for kittens” “How do you litter train kittens?” “Size of 2 month old kittens” “Size of 3 month old kittens” “How big should 3 month old kittens be” “How old are my kittens dammit” “How do you get kittens to sleep at night and not pounce on your toes under the covers?” “Life of a cat” “Training your kittens to walk on their hind legs” “Why do cats look at me like that?” “How much to feed 2-3 month old kittens” “Best kitten diet” “Kittens always hungry” “How can you tell if you are underfeeding your kittens?” “Can cats read minds” “Do cats have x-ray vision?” “Should I let kittens play outdoors” “Why do kittens not look before they leap even if what they are leaping over is the barrier between something really good and fun like grass and something that they really hate like a moat” “Kittens getting a belly” “How do you tell if you are overfeeding your kittens”

Thank god for the internet, really. 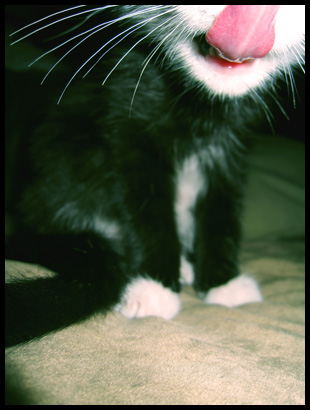 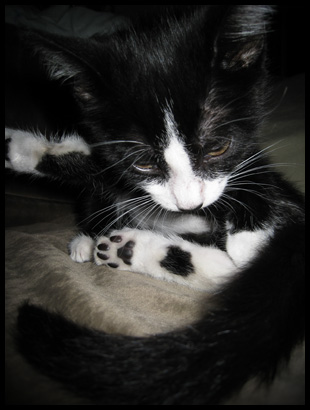 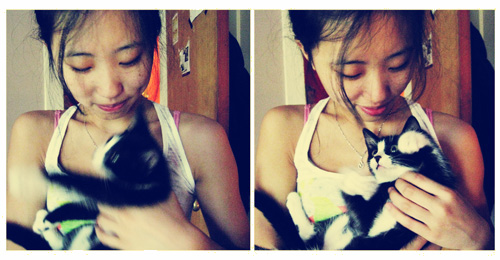 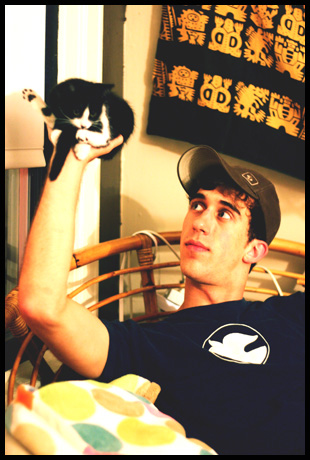 a good belly rub
pizza
pawing things
following me around
standing up on their hind legs
not having fleas (though I certainly haven’t heard a word of thanks)
sleeping in my bed at night
giving me allergies
clinging
snooping
eating
pooping
tricking me and chris into thinking they haven’t been fed yet even though they totally have so they get to eat more and poop more
the second floor lounge / foosball table
my necklace
licking each other and then hitting each other in the face
standing in the litter box even though you are clearly trying to clean the litter box
chewing on their own tails
pushing the F-buttons on my laptop whose functions are nothing but a mystery to me so I don’t know how to make my browser go back to how it was before.
ignoring what I tell them to do (like not pushing the F-buttons or pouncing on the cursor on the screen)
not noticing when they are being raised 8 ft in the air
raising a ruckus just because they can
talking to me like I understand them
listening to me talk to them like they understand me
looking out the window
moths
catching moths
eating moths
leaving uneaten moth parts in my bed
physics – like the physics of jumping really really high and condensed matter physics
running like mad and sliding uncontrollably into the hallway whenever they hear anyone come in the door
untying things (like shoes)
falling off of things
watching the olympics with me
the little streamers on my fan (oh boy oh boy oh boy)
my mom’s cooking
judging people before they really get to know them. for shame, cats
hanging out inside guitar cases and amps
being better fed than i am
being named maxwell & j.p. licks. 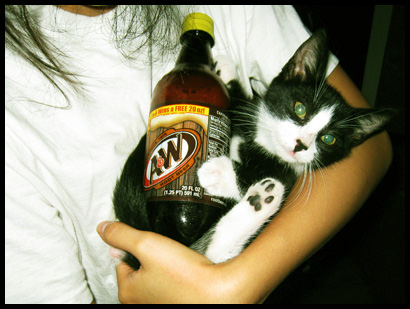 being cats all day long 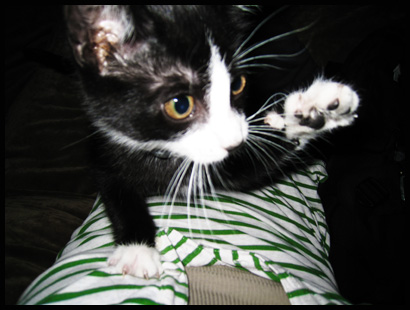 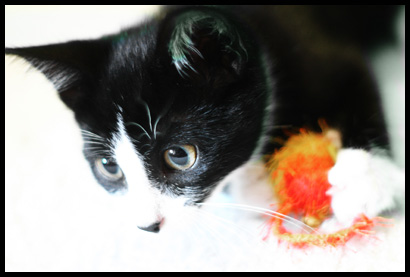 omg kittens’ lives are so exciting

showers
being upside-down
the moat around the chapel
jumping accidentally into the moat around the chapel and having to be rescued and then getting a shower afterwards
my vacuum cleaner
being woken up and held by people just cause they’re so darn cute
being poked in the nose
when the other kitten is still eating and they are not (even though you guys got the same amount and you just gobbled yours down)
when anyone is eating and they are not
especially when they are eating pizza
my morning routine because they get fed afterwards
mango
timeout outside my room for spilling things or breaking crap or jumping on my chest when I’m trying to sleep
physics- like the physics of falling in moats and high-energy-density physics – like what the hell is that anyways
racism. esp when it gets in the way of them being fed.
flash photography 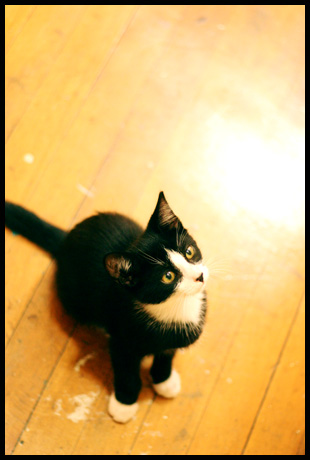 Licks is coming over to EC w/ me next week when I move back. I think she’ll like it there w/ all the space and all the other cats for company. Naturally, Maxwell can come over, too :)