... Something would have to blow up

If you haven’t heard of xkcd, stop reading. Instead, go over to xkcd.com, read all 1400+ comics, laugh, cry, fall in love, and then come back.

xkcd is “A webcomic of romance, sarcasm, math, and language.” Its creator, Randall Munroe, has something of a cult following here at MIT: we’ve hacked his lectures, celebrated his anniversaries, and replicated this comic in Simmons hall. I’ve even seen some painted as murals on dorm hallways.

But Munroe does more than draw comics: he recently published a book called “What If? Serious Scientific Answers to Absurd Hypothetical Questions,” in which he uses legitimate, scientific tools and data to guess at impossible questions like:

More often than not, the actual physics causes some form of apocalyptic catastrophe.

The idea started on whatif.xkcd.com, but gained so much popularity that Munroe decided to publish a collection of popular answers from the website, some original answers to brand-new scenarios, and a list some of the weirdest questions he’s received. The book itself is about an inch thick, is absolutely hilarious, and, according to the back cover, contains about 2,300 calories, not that we could successfully digest it.

Two weeks ago, to kick off the launch of the book, Munroe held a book signing event at Harvard’s Brattle Theatre. This was announced last spring, and I thought for a while about if I wanted to attend.

Pro: get to meet Randall
Con: must visit Harvard

Just kidding! Harvard is actually a very cool place, full of wonderful people, and everyone should visit before concluding that MIT is clearly better. Anyways, September 2nd, the date of the event, also happened to be Registration Day here at MIT, but since freshmen had already registered with their advisors, I didn’t have any conflicts. I asked Facebook if anyone else was attending, assembled a posse of fellow xkcd fanatics, then headed out with Ostin ‘17, Henry ‘18, and Zareen ‘18. Harvard is a little over a mile away from MIT, which translates into either a 30 minute walk or a 10 minute subway ride. It was pouring rain, so we opted for the latter, got in line, got our books, got our seats, and got excited. Randall Munroe himself took the stage and finally began.

His talk opened with a history of “What If?” – the idea actually originated at MIT (which was more than a little ironic to hear him say aloud in a Harvard Theater). Every year, just before Thanksgiving, MIT hosts an event called Splash, in which pretty much anyone can volunteer to teach a short class on pretty much anything to over 2000 high school students who descend on the MIT campus to learn about everything from “Understand Topology” to “Moby Dick and Modern America.” Randall has taught Splash classes in the past, and was once particularly struck by how his students were much more interested in physics examples involving Yoda and X-wings than examples about “a block of mass m.” This lead to an idea: just because physics itself follows rules and is generally boring, that doesn’t mean that we can’t apply it in absurd, hilarious, or even impossible scenarios. Thus was born the blog that became the book, where all the literal, technical rules of mechanics, heat, and motion apply, but only after we magically create a little green man in a swamp.

The rest of the talk was spent walking through one of new chapters in the book, which I won’t relate here because you should all go buy the book yourself and read it. Mr. Munroe narrates his own work beautifully, and it was a pleasure to hear it live. Afterwards, as the entire auditorium mobbed the book signing table, I elbowed my way to somewhere near the front of the line, eager to speak with my hero before he got too tired of talking to fanboys. Besides: I had a mission.

Conner 2, the floor just below the one I live on, has a tradition of naming units of measure after its residents. Conner 2 bloggers have written about this before: one Snively is one byte wasted on the internet; one Maurer is one unit of awesomeness. Bloggers have also taken this to extremes, personally asking Stephen Colbert and even President Obama what their units would define (responses: “Ball” and *blank stare*, respectively). Now, Randall Munroe is not quite as publicly famous as either of those, but to MIT students, he’s just as prestigious. So I knew that I wasn’t only going to get his signature: I was going to get his unit. I was pumped. This answer was going to be hilarious – while we might excuse the President for being too stressed or distracted to come up with a quick, witty response, Randall is a professional comic artist – he makes people laugh for a living. This was going to be epic.

“Mr. Munroe, I can’t tell you how huge a fan I am of your work. I actually quoted you at my graduation speech!”

“Oh wow, thank you. I appreciate it.”
*begins to sign my book* 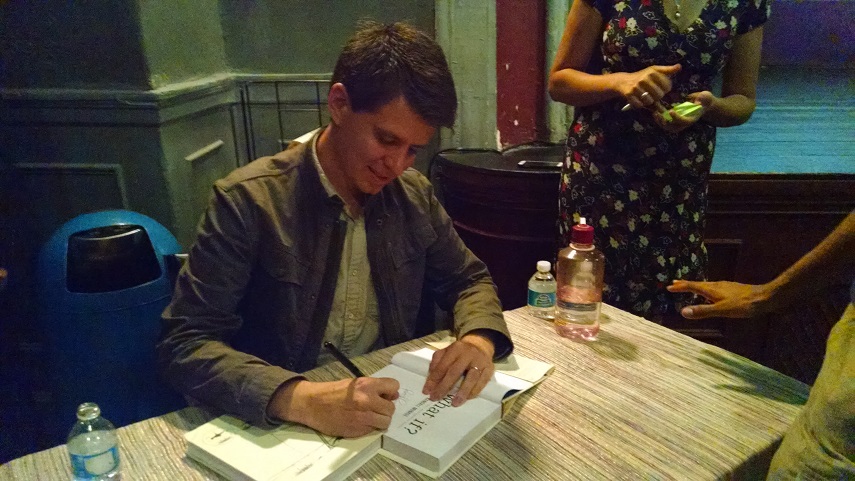 “But I do have to ask: if you were a unit of measure, what would it be? ‘One Munroe’ – what should it guage? It could be anything, no matter how ridiculous.”

I thought this was an excellent explanation; I had crafted it carefully while waiting in line. What would his response be? Self-reference? Sociopathic abuse of random strangers? xkcd in general?

“Hmm… right now, a river’s output is measured in cubic meters per second, which is a very awkward unit. I guess I’d go with that; it’d made things easier.”

Wait. What? HE COMPLETELY MISSED THE POINT! Maybe I didn’t make myself clear, or maybe he was too busy drawing Cueball on my book to pay close attention. Either way, I’m reassigning the Munroe to measure “one unit of taking something humorous far too literally.”

Which is actually fitting: after all, that was the entire premise of “What If?” to begin with.