What the end of the semester does to Conner 2 by Laura N. '09

For one thing, no one does the dishes. And I mean no one.

Hello readers. Happy Holidays to everyone!

The term is over and I’m happy to be getting lots and lots of sleep in my FULL SIZE (!) bed at home. Almost all of my grades are in and I’m also happy to report that I did much better this semester than last (*grin*), so that’s a nice feeling. All that’s left from last semester is a bunch of pictures that I’m about to share.

I walked out of my room one day to discover a huge mess. Well, it may have taken a while for the mess to present itself (perspective and all that). But it had finally reached the point where it was worth documenting, so I took a bunch of pictures. And now I’m able to show you just what finals week did to the 213 suite. 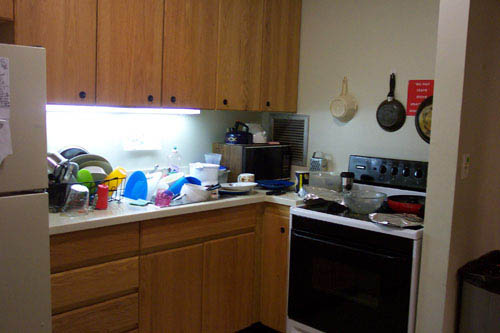 First of all, everyone is always eating and never doing dishes, so the sink looks like that. 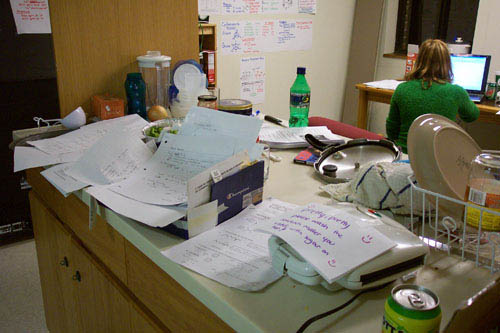 Second of all, people…apparently don’t have big enough desks, so they spread their study materials all over the counters, like so. 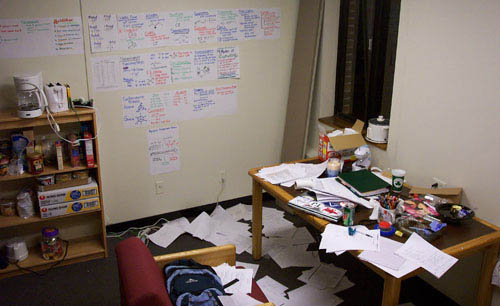 Also, since our walls are not made of dry-erase boards, they improvise. This is the wall of 5.12 (organic chemistry) study material, I believe. (I’m not a chem person, don’t ask me.) 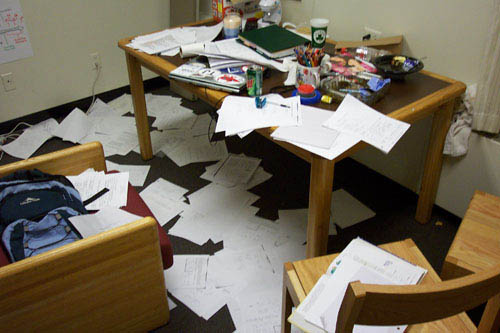 And we clearly don’t have enough counter space…

But who wants to talk about how crazy everyone was studying for finals? They’re over! Let’s talk about the good stuff.

Right between the end of classes and finals week (known as reading period, which is when we’re given a couple of days off to “study,” which we really spend shopping and catching up on sleep, which are both valid uses of our newfound free time, in my humble opinion), is the annual “Conner 2 non-denominational politically correct winter festivities dinner,” which is so named really just for the fun of it, since it comes complete with its very own “Secret Santa” tradition that no one ever complains is politically incorrect. Go figure. 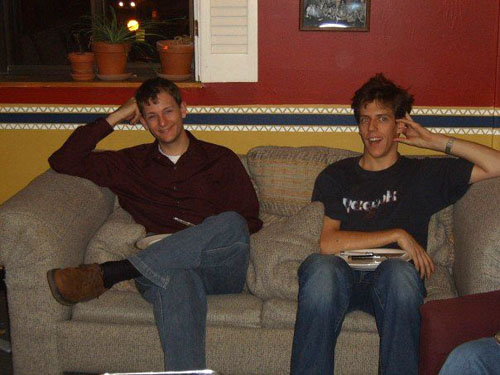 Chris (our GRT) and David. 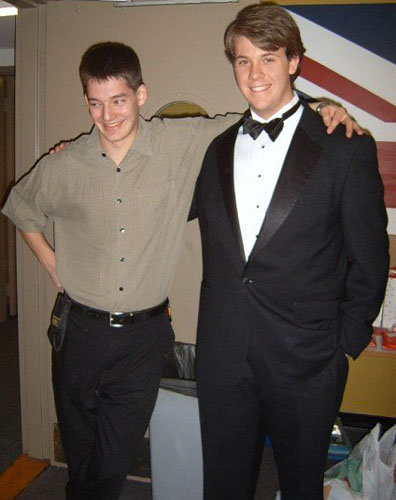 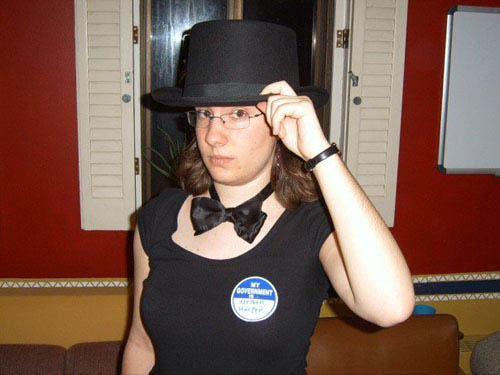 A week before this picture was taken, some people were handing stuff out in front of Building 7 (the main entrance to main campus). This isn’t really unusual, and it comes with varying degrees of annoyance. Protesters and activists hand out pamphlets and chant slogans, and sometimes I find myself able to forgive them for what I think are ridiculous opinions based on the cleverness of their slogans. Anyway, on this particular day I was handed one sticker, no strings attached (not even a website to visit, the one time I actually wanted more information) by a guy who explained that they were trying to get people to think about and get involved in public issues. The sticker said “My government is a          “, which totally cracked me up. I really thought this was hilarious. Rick was also handed one of these, which he saved “in case he ever needed it.” Well, he scratched out the “a,” filled in the blank, and gave it to Adelaide as part of her Secret Santa gift. Anyway, all of that is a really long way of getting to the point, which is that Adelaide is wearing a sticker that says “My government is Stephen Harper,” because Adelaide is our resident Canadian. 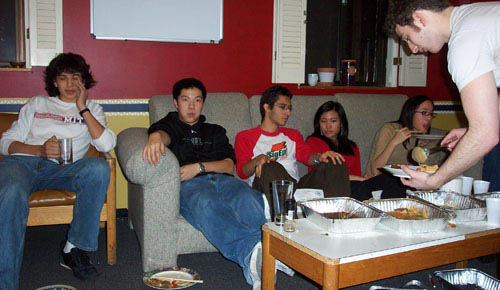 Ha. Mason is clearly the only one who has any idea I’m taking this picture. 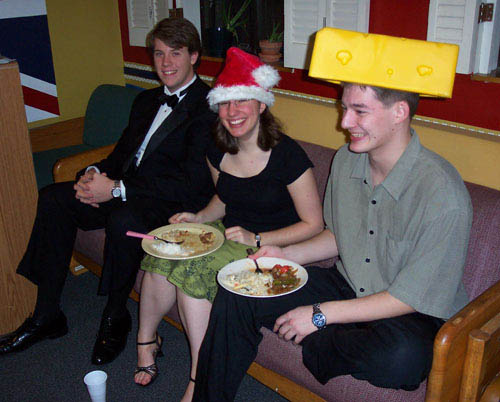 Rick is wearing a cheese head, because he’s from Wisconsin. I guess. I don’t know, I just post pictures on the Internet, ok? Apparently Conner 2 is really into making its residents into caricatures based on their home towns/cities/nations. (Diana and are the resident “New Jerseyans” and often get asked such things as “So when you go home for semester breaks, is it really like that movie Garden State?”) 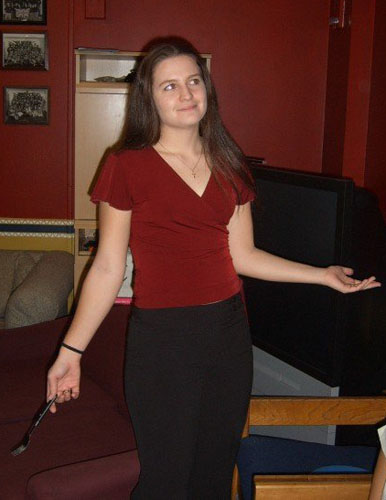 I was debating if I wanted to get dressed up or not, and finally gave in to the temptation because Javier wanted to know what I actually looked like when I was dressed up. Adelaide took this picture, and I kind of think she should title it “Girl with Fork” because that would be both accurate and artistic, and how often do those two coincide? Seriously.

Conner 2 has an additional tradition related to our Secret Santa exchange- instead of just writing the recipient’s name on the gift (how boring would that be!) we instead attach a poem about them. The fun starts when one person who is elected to begin the exchange picks a gift at random, reads the poem, and then everyone else figures out who the poem refers to. As you can imagine, these poems can get…creative? Amusing? Inappropriate for reposting on the Internet? All of the above? ;-) 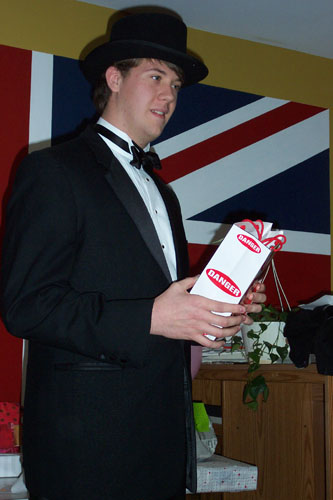 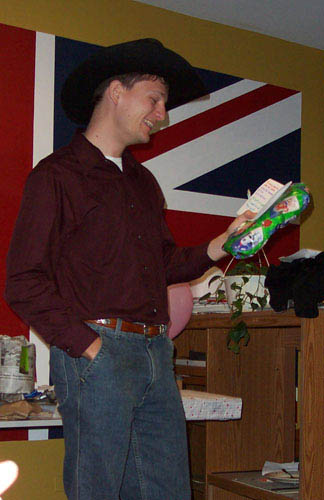 As for the poems, limericks are a popular choice, although this year even included a real-life honest-to-goodness sonnet. No joke. We take our Secret Santa seriously here on Conner 2. 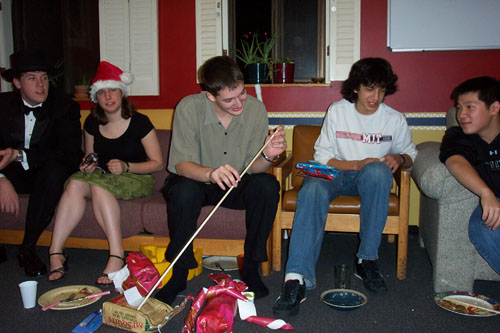 For example, Rick’s gift was actually 5 or 6 separate items, separately wrapped. After the barbecue chips and wooden dowel, we were all really, really confused, until he finally unwrapped the… 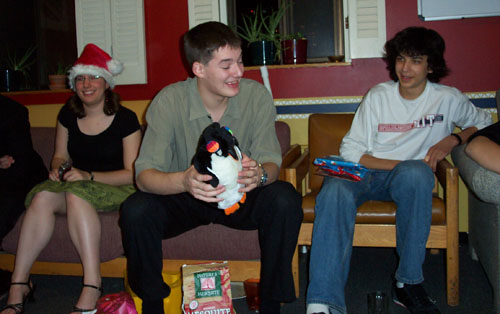 stuffed penguin. Apparently there’s some inside joke that I totally missed (which sadly ruined my full enjoyment of this moment of unveiling) about Rick wanting to know if rotisserie penguin are kosher. Don’t ask me, I wasn’t there, and I mean it when I say I really have no idea. 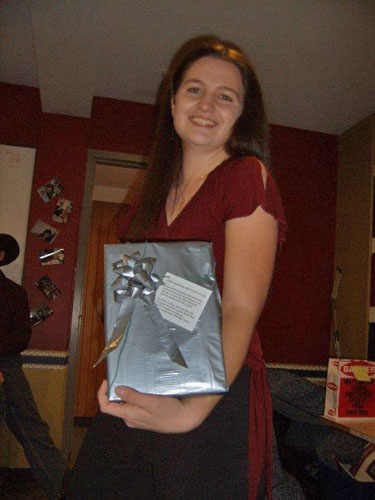 In another example of Secret Santa hardcoreness, my gift was wrapped in duct tape (to which someone joked “how are you going to open it??”), a reference to my duct tape fashion constructions for the Anything But Clothes Party. (Seriously, once you post pictures of yourself wearing nothing but duct tape on the Internet, you can NEVER GO BACK. Just remember that. Forget everything I ever told you about college apps- that’s my biggest piece of advice). My poem even started “In case the packaging didn’t give it away…”

Thanks to Adelaide for some of the pictures! Happy Holidays, everyone! What are you guys doing for New Years?

(No pressure, I’m probably going to invite a friend to sleep over and stay up all night with my sister watching Season 2 of Veronica Mars on DVD, which I just got for Christmas.)

Responses to Comments:
Anonymous asked:
What classes do freshmen take?
Although there is a certain amount of freedom, freshmen usually try to knock off as many of the GIRs as they can. (GIRs are General Institute Requirements, which are core classes that everyone needs to graduate.) It’s possible to branch out and start with some other subjects, but that can be hard to do first semester since even a lot of the introductory classes within the majors have GIR pre-requisites. The basic track goes like this:

Fall semester:
18.01 (Calculus)
8.01 (Mechanics)
3.091 or 5.111 or 5.112 (different “flavors” of intro chemistry)
??.??? Humanities class of your choice- it’s best to pick one that has a HASS-D (distribution requirement) and/or CI-H (communications intensive) label, since these are part of the needlessly complex (in my opinion) Humanities requirement

Spring semester:
18.02 (Multi-variable calculus)
8.02 (Electricity and Magnetism)
7.013 or 7.014 (different “flavors” of intro bio- another flavor offered in the fall as 7.012)
??.??? Another humanites class of your choice- again, HASS-Ds and CI-Hs are useful, but by this point you’ll have a better grasp of the requirements, which will make it easier to know what you should take

Depending on what classes you pass out of with AP credit or advanced standing exams, this schedule can look a lot different. This is just one option for a student that didn’t test out of anything. If you get credit for 18.01, you could obviously start at 18.02 in the fall. Or you could take chemistry and bio in the fall and wait until the spring for 18.02. Or…well, you get the idea, there are lots of combinations available. The vast majority of freshmen take some calculus, some physics, and some chemistry first semester. And not that many take biology- it’s an intro class, but since most majors don’t require it as a prereq, it’s certainly not uncommon to see seniors in 7.012, scrambling to fulfill the requirement for graduation. =)

Another common freshmen class is 18.03 (differential equations). 18.03 is not a GIR, strictly speaking, but it can satisfy one of the REST elective requirements (restricted electives in science and technology…even though it’s a math class…go figure…) and it’s required for some of the more common majors (Courses 2 and 6- mechanical engineering and EECS, respectively- spring to mind). Also, a good portion of freshmen who test out of the intro classes (common ones to skip are 18.01, 18.02, and 8.01) will take an intro class in their major during the spring semester- like 2.001, 6.001, etc. While this can be a great way to get your feet wet in a subject you’re not sure you want to major in, it’s important to remember that it’s not remotely necessary- if you come into MIT with no AP/transfer/advanced standing credit whatsoever, you can still graduate on time, take a bunch of cool classes, and be sure you won’t be made fun of or anything. By sophomore year, most students will be in a similar place and no one will know/remember/care if you tested out of 18.01 or not.