The answer is "to a fast food restaurant to blog; to four countries in one day."

DID YOU KNOW? One of the sister cities of Hiroshima, Japan is my hometown of Harrisburg, Pennsylvania.

The title is taken from a short story by Joyce Carol Oates that we read in AP English. When I read it, I thought that it was the most obvious thing in the entire world that the whole narrative was supposed to be a dream that the main character was having while listening to the radio, but nobody else in the class understood what I was talking about at all, and Mrs. O’Brien told me I was totally crazy. A year later I e-mailed her with a peer-reviewed paper supporting my conclusion, and she told me that Joyce Carol Oates called that paper ridiculous. I ended up passionately hating Joyce Carol Oates for like two years until I read Everything is Illuminated and found out that she taught Jonathan Safran Foer how to write, and then I realized she couldn’t be all bad.

MORAL OF THE ENTRY: Read Everything is Illuminated by Jonathan Safran Foer.

Sorry for the lack of blogging over the past week, I just got back from a long, long, long trip across Italy which I will describe to you tonight after I go to Mr. Chicken and upload some pictures. But first I want to tell you about the most exciting part of the trip–getting home! No, really.

I was in four different countries in one day!

I was all excited about that until Ling ’07 pointed out that last month we train-trekked across the width of Germany and basically all the way through Switzerland and France, plus a hundred miles into Spain, all in 22 hours. Move over, Anthony.

But back to my other story. The dreadlocked Kendall ’07 lives in Aachen, about an hour west of Ling ’07 and me in Leverkusen, and despite that fact I have never been out to visit her. So, on our way back from the Dпњљпњљsseldorf-Weeze airport in the middle of the afternoon, we decided to put our 15 пњљ«® NRW Bundesland ticket to good use and take a visit over to Kendall’s place.

One thing you should know is that the Dпњљпњљsseldorf-Weeze airport is nowhere near Dпњљпњљsseldorf, and it’s going to cost you a bundle to get to or from there. So don’t think “Ooh, la la la, discount tickets! Woohoo!” unless the tickets are at least 15 пњљ«® cheaper than the next best price, or unless you have something else to do with a Bundesland ticket, like we did.

But Aachen is really nice, and I kind of wish that I had worked there instead of the sprawling industrial shrine of Leverkusen. There were lots of hills and cows and playgrounds and sculptures of sheep and quaint little European houses. Aachen’s major claim to fame, kind of, is its proximity to the Dreilпњљпњљnderpunkt–the junction of Germany, the Netherlands, and Belgium. They have a labyrinth there for no apparent reason. I love Labyrinth, but it was closed by the time we made the hike up there. What they also have is a monument marking the highest point in the Netherlands. Germans and Belgians are apparently always, “Ha ha Netherlands” when they walk by because this point is seriously not even that high. Also, Flemish is like the weirdest-sounding language of all time. So they probably laugh at that, too.

BONUS: Check back tonight for an exclusive Turkey vs. Spam picture and video of the Dreilпњљпњљnderpunkt!

My blogging will be a little sparser in the near future because I’m a little tired from our whirlwind tour of Italy, hitting Venice, Florence, Pisa, and Rome in the space of four all-too-short days. And then tomorrow night I’m leaving work a little early so that we can get over to Paris before nightfall. But that’s it. One more weekend in Germany, and then I get back to where I once belonged at MIT. We do have plane tickets to London, but we decided that we’re a little bit hosed from 13 straight weeks of European travel, so we’re just going to eat the cancellation fee instead of spending four times that much to half-heartedly see a few sights in London.

OH WAIT! I also came up with another commercial idea while I was in Italy. Kendall ’07 was letting me listen to some German music on trains through Italy, and one of them was by the great pop-punk-ish band Wir Sind Helden. One of the songs, “Monster,” had the unstoppably catchy chorus of “Kannst du mein Monster halten? Kannst du mein Monster halten? Kannst du, kannst du?” (Can you stop my monster?). And images of German youths biting into crispy chocolate bars while Wir Sind Helden sings, “Kannst du mein Hunger halten?” (Can you stop my Hunger?) just popped into my head. Okay, it’s not grammatically correct (should be “meinen Hunger”), but once you listen to it, you’re going to want a candy bar so bad that you don’t have time to correct Wir Sind Helden’s grammar. I tell you, I’m a natural at this thing. Why did I go to MIT?

I have wasted my life.

So Ling ’07, Kendall ’07, and I did take the obligatory “let’s stand in 3 countries holding hands at the same time” picture: 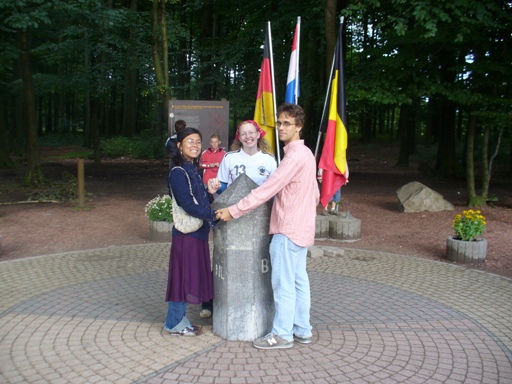 There is also a playground right next to the Dreilпњљпњљnderpunkt. And as you probably all discovered in high school, teenagers at a playground designed for 8-year-olds is the most fun thing EVER. Now, also, you have to realize that playground safety is a huge thing in the US. Not so much in Europe. So the playground was basically just a sandy patch covered in spinning metal implements of doom and trees that 8-year-olds could easily crack their heads on. And if there’s one thing I really like to do, it’s spinning. So, good MIT students that we are, we spent the next hour conducting a lab practical in moments of inertia.

I like spinning so much that when I was young, I used to play this game… with myself… called “Scrambler,” where you pretend you’re on the Scrambler ride at Hersheypark. Basically, it involves running around in a circle while also spinning in circles at the same time. Sometimes I played it with other people too, if they were around. But nobody was quite as good at it as I was–after all, I had the most practice. I demonstrated the game to Kendall and Ling and invited them to join in. They thought it was interesting, but decided that playing it would be inadvisable after our macaroni and cheese dinner an hour beforehand.

After taking 550 pictures, I had like 8 seconds of video left on my memory card, so I said, “Hey, I’ve never actually seen what Scrambler looks like. Could you take a video of me playing it?”

I really start to wonder what kind of family lets their child run around doing that in the front yard for hours at a time. But I got into MIT, so Sam’s Mom must have done something right.

This entry is brought to you by the European Union, whose formation meant that I did not have to check my passport 5 times in the above video.

3 responses to “Where are you going, where have you been?”