The ponderings of an ex-frosh.

My Mets are seriously kicking some you-know-what lately. I love it. Omar Minaya is my hero. =D

Simone said:
now that freshman year is over, how would you describe your first year at mit? relieved that you’re still alive, dying for fall semester to start? from hearing about how hard mit is as a prefrosh, to a rising sophomore whose gone through all the goods and bads of freshman year, what do you have to say about mit now? also, just out of curiosity, and its totally okay i you don’t feel comfortable talking about it, but what’s your grade like so far at mit (1st and 2nd semester, assuming there wasn’t pass/no record)? and what was your grade like back in high school? for example, were you a straight a student in high school and getting straight b’s here at mit?

Well now you did it. I guess now is as good a time as any to ponder the intricacies of my freshman year.

How do I feel about freshman year being over? A little sad, actually. I enjoyed being a freshmen. I remember freshman year of high school complaining about bio objectives (weekly bio homework) and biosystem presentations- staples of freshman year at my small, close-knit high school. But then of course, once you became a sophomore it was all, “Aww, the freshmen are doing bio objectives!” and you immediately got all nostalgic because you thought you were so cool now that you weren’t at the bottom of the social food chain. You get what I’m saying, right? Well anyway, I resolved to appreciate my freshman year of college as much as possible, and I really took that to heart. Freshman year is kind of a bonding experience, because you’re all going through the motions of calculus psets (everyone’s got to do them but at the same time, you’re all thinking “pass/no record, God bless pass/no record…”), and there’s nothing quite like it. Next year I’ll be taking smaller, specialized classes in the major I haven’t chosen yet, and things will be very different. Of course, it’ll be cool to be done with non-applied math (*sigh of relief*).

In terms of how hard it was, that’s a tough question. There’s a lot of work, and some of it is really hard. As for me, I procrastinate far too much. I’ll never be as productive as Mollie, for example. I read her blog and I’m like “what?! she…how does she…I don’t get it.” I personally think I’m a little too ADD for straight up productivity. I have a hundred interests and I’m always running around trying to join some new club or put together some random project or something. In high school, this was great. I got straight A’s in high school and had a blast doing all of my random energetic projects. Here, it kind of gets in the way of me having the work ethic to just sit down and finish that %&[email protected] pset already.

So first, just a little note about GPAs- you won’t have one until you’re a rising sophomore. Since first semester is “graded” as pass/no record, no GPA is calculated. Which makes sense, you can’t have a grade point average until you…have grades. And that won’t happen until the end of your freshman year. That said, my GPA is a 3.8. When I tell my friends, I think I’ll just leave it at that. But in the interest of full disclosure to you guys, I should mention that at MIT, GPAs are on a 5.0 scale. *grin*

Let me sidetrack for a minute. For as long as I can remember, I was one of the smartest kids in my class. Sometimes this was kind of cool. Sometimes this was not so cool. Do I really need to explain this? If you’re reading this, you probably get it all too well. Then I went to a selective public magnet high school, and I figured that once I was mixed in with some of the smartest kids in my county, I wouldn’t be a straight A student anymore. Only that didn’t happen. I was still one of the smartest kids in the class. I’m not complaining, I liked my straight As. And I like being smart. But after awhile, I was getting really sick of it. People were always coming to me for help (which was annoying), or bragging about me (which was awkward), or expecting me to always ace tests (which was stressful). So then, I got into MIT, and I thought, “OK, NOW I won’t be the smartest kid in the class,” and this time I was right. *grin* And you know what? I love it this way.

I probably shouldn’t announce this on the internet of all things, but my personal academic goal for MIT is to pull off a cummulative 4.0 GPA- a B average. (I say I shouldn’t say this because now I’m on record saying it, and every prospective student and their parents will know if I fail at said goal, but oh well. *grin*)

Anyway, like I said, I don’t really have the best work ethic, but I’m sure I could pull better grades if I really tried. The thing is, I don’t really want to. Wait, don’t judge- I’m not done yet. It’s kind of the same logic I used when I decided not to double major. Sure I probably could pull it off if I really wanted to- but I play field hockey and I’m going to get a job and I volunteer on the ambulance and…there are so, so many other aspects of my life that are really important to me, and I’m not going to sacrifice them in order to pull my GPA up a few points. B’s are fine with me. Of course, if I start failing everything, I’ll have to drop a few extracirriculars. But in the meantime, I don’t think academics is the absolute most important thing in my life. Sure it’s a priority, but I’m living and learning and getting a lot out of other things too- things I can’t get out of a book.

On that note, I also spent this year cycling through clubs. I tried out a bunch of activities, and I was always evaluating how I felt about them. I had a lot of fun being super busy this year and I don’t regret a single minute I spent on anything. (Except maybe calc psets. =P) But in some cases I didn’t make strong connections with the people I was working with, or I didn’t really feel passionate about what I was doing. So I’m glad I had some experience with different things, and next year I’m going to go try a bunch of completely different things instead. I have a feeling this is going to be a pattern, and I don’t mind it at all. There are just too many things I want to try. Besides, I’m sure along the way I’ll run into some activities I really love to do that I’ll dedicate insane amounts of my time and soul to.

Does that answer your question? =P

The other day I went out to eat with my friend Tetty. You remember Tetty, she’s the one who hosted that gingerbread house making party where I exposed my true inner nerd. Anyway, I was wearing my favorite new shirt, and as soon as I got out of the car I said, “You know you love my shirt.” 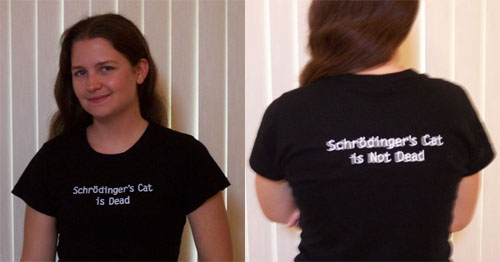 Well, at first Tetty pretended to be mortified to be seen in public with someone wearing that shirt. (As a side note, it’s really a horrible shirt to wear anywhere that’s not…I don’t know, MIT for example. Whenever anyone asks you what it means, you’re just like, “OK, I’m so not explaining quantum mechanics to you.” I’ve been toying with the idea of telling people that they’re lyrics to some obscure heavy metal song or something.) Anyway, Tetty soon revealed her own inner nerd. “But…” she said, “…the probability that I read the front of your shirt is much greater than the probability that I read the back of the shirt, so…”

I think the girl has a point. It seems like this detail would mess with the wave equation. Thoughts?

8 responses to “Where are you going with this?”