In Northern California, Munich, a tent in New Hampshire, and an oreo-flavored soft serve machine.

DID YOU KNOW? The MIT school fight song, “The Engineers’ Drinking Song” was originally derived from the song “A Son of a Gambolier” by my childhood friend Charles Ives.

Hokay, so I still do exist and I still do blog once in a while. I’ve been feeling kind of floaty these past few weeks, like there’s a quote from The Unbearable Lightness of Being to describe my current situation, but I can’t remember it because I didn’t end up liking that book as much as I hoped.

Guys, I have a great joke.

Q: Why was six afraid of seven?
A: Because seven ate nine.

Q: Why was seven afraid of eight?
A: Mathematical induction.

But seriously, guys, everything’s really up in the air right now. I’ve got six days to choose a grad school. I’ve got it narrowed down to the sketchy liberal slums of UC Berkeley and the sprawling Spanish resort paradise of Stanford. But it’s hard–grad school is different because you don’t only have to choose a place to spend then next five years of your life, you also have to find an adviser to whom you can relinquish control of you academic future. There’s one dude at Stanford, Tom Jaramillo, who I’d really like to relinquish myself to. But then at Berkeley I see some awesome atmospheric chemistry stuff, and, well, it’s hard, unlike choosing MIT for undergrad. You know it!

More immediately, I have no summer plans. This afternoon I met with the incomparable Dr. Sigrid Berka, who found me my summer internship in Germany last summer. It’s kind of too late to find an internship in another country right now, which is cool because my one requirement for a job this summer is NOT TECHNICAL. So she suggested that I just go around Germany interviewing other interns and blogging and getting paid by MIT. Well, that’s not too bad a deal. But tomorrow I’m heading down to JP Licks for free scoop day. The last time I was there, there was a “help wanted” sign–so I’m hoping it’ll still be there and that the place won’t be too crowded for me to pick up an application. I’m actually hoping for kind of a combination of the two at this point–actually, my dream would probably be to travel around Europe scooping ice cream for different MIT students. Since every third store in Germany is, by law, an Eiscafe, it’s actually kind of a feasible dream.

Also of interest, I went camping with Conner 2 this weekend. 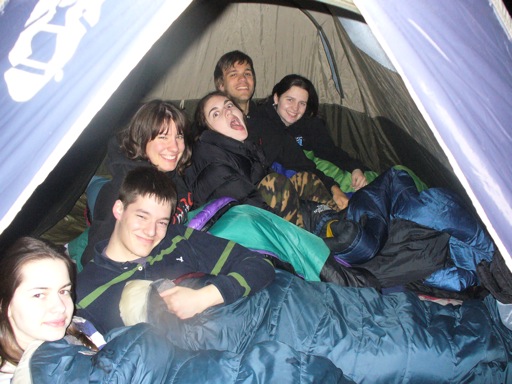 There was also a cabin to stay in, but, you know, we’re not losers. I am, however, kind of clumsy, because somehow in between buying some delicious Apple Dapples in New Hampshire and leaving the cabin, I managed to misplace my wallet. Luckily, I saved my MIT ID, which is good because all MIT IDs printed after 2008 make me want to hurl when I look at them. Sorry, it’s true. Anyhoo, I’m pretty sure I know where I left it in the cabin, so I just have to wait until the cabin is inhabited again so I can ask people to look for it. I’m actually not too worried about losing my driver’s license or anything, because the picture’s bad, and there was only one dollar in the wallet itself. So I might have to get my debit card replaced, at worst. But I had a free movie coupon for LSC that I earned by paying full price for ten movies, and also I was only one falafel away from a free falafel at the Couscous Kitchen food truck. I feel totally naked now.

In the meantime, I’m really super glad that I have a passport, because Ruth ’07 awesomely scored tickets to see The Colbert Report on Wednesday, so we’re skipping all of our classes and making a $15 Chinatown bus trip down to New York City to see it. Covet!

Anyway, I have like 87 German-related assignments to do for tomorrow, because I’m the biggest slacker on Earth. Oh, it’s true. But remember, don’t you start slacking this last quarter just because you got into MIT or anything–if Marilee Jones catches you slacking, she’ll come to your house and kill your dog.

So don’t push her!