DID YOU KNOW? Wolverine is from CANADA.

Okay, first of all, who would win in a fight: James Bond or Wolverine?

That was how I started this entry three days ago but sometime betwee now and then I got waylaid. I forget where I was going with that, but I think it was something about how they were all humming with electricity or making some repeated pumping noise somehow, and I was only just at that moment aware of all the different sounds in the laboratory at any given time. Kind of like how people who live by waterfalls don’t hear the water. Except at MIT, it’s a waterfall of knowledge.

As I said last entry, I won best apple-tizer at Burton-Conner’s annual apple bake competition with Ina Garten’s recipe for apple butternut squash soup. Let me tell you, the next time you make this soup, it’s gonna blow your mind. Seriously. This is the best recipe for soup I have ever tasted in my short life. Ignore the four-star ratings on the website–the people who posted that are clearly stupid. I just made a few small alterations–I didn’t have any curry powder, so I used a little cumin, cinammon, nutmeg and dried hot pepper (trust me, I made it work). Then I added vegetable broth instead of water to the onion mixture. And then I served it with a little sour cream on top. It brought me closer to God. Thanks, Ina.

In an interesting bit of synchronicity, I was jogging in the Z-Center on Wednesday and Ina Garten was on one of the 8 TVs there showing me how to make the soup. She served it with salty croutons, which I bet was also pretty good. I’ve actually come around to jogging more in the early evenings because some benevolent personal trainer always seems to put on Food Network… and Rachael Ray is actually pretty appetizing to watch when you don’t have to listen to her talk.

BUT YOU JUST WANT ADVICE ON HOW TO WRITE A WINNING EARLY ACTION APPLICATION; WHO CARES ABOUT SQUASH SOUP RECIPES?!

Well, uh, I can’t help you there, but I can post some stereotypically MIT photos: 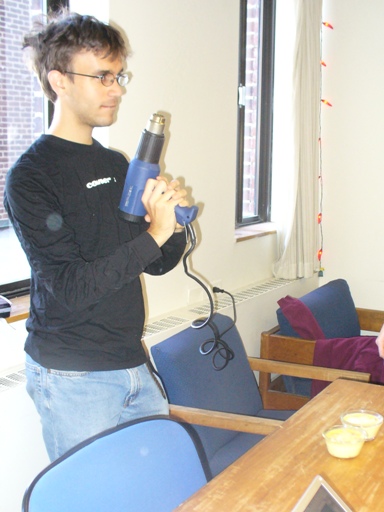 In order for me to properly my apples creme brulee, it was necessary for me to sneak into my UROP lab after hours and steel an industrial strength heat gun capable of outputting a steady stream of 1100 C air. Basically, it’s like a hair dryer, except it could kill you.

With that in mind, it was necessary to use protection… 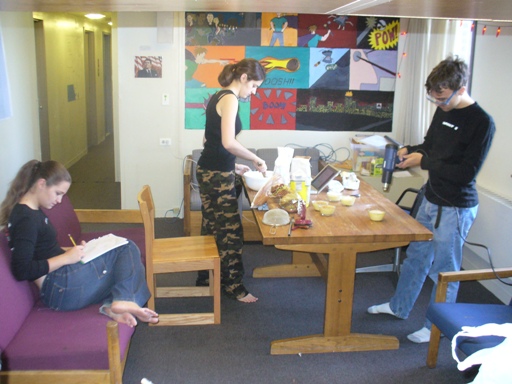 …so I put on a pair of lab goggles. Meanwhile, Ruth ’07 makes non-kosher hamentaschen, and Laura ’09 lays down some plans for an apple Rube Goldberg device that will no doubt materialize next year. Or else. Only at MIT does baking apples involve a hammer, a cinderblock, rock climbing equipment, and an industrial-strength heat gun.

In another interesting coincidence, last night, three days after titling this entry “Wolverine,” I watched X2 instead of doing my 6.003 pset. Since I have the class on junior-senior P/D/F, watching Hugh Jackman really seemed more important to me. I then fell asleep during my pset, woke up for no reason at 6 AM, and finished the rest of it in under an hour before deciding to go back to sleep. But I digress. Did you notice that Cyclops is kind of a total tool in X2? I really liked it when Jean Grey vaporized him in X3. That was awesome. Also, I like how at the end Professor X goes to the president and is all, “Mutants aren’t harmful, we can live among you in peace” when just two days before he almost killed everyone in the entire world just by thinking about it. I mean, seriously.

That was kind of a random entry, huh?