I’ve decided to continue a long chain of poor decisions by starting to write this post at 5:38 AM. In front of me is an empty Pringles can and some iced tea, to my right is a notebook full of vectors and gradients and force fields that are all starting to blur together, and over on the couch is Reva ‘18, who fell asleep on her laptop keyboard while attempting an 8.01 pset. The room feels like a postwar battlefield, with drowsy casualties strewn across the furniture.

This week is my second-busiest of the fall semester. I finished an 8.01 Physics pset early Tuesday morning, I finished a 7.012 Biology pset early Wednesday morning, I wrote an essay for my advising seminar yesterday, and I’m currently trying to finish an 18.02 Multivariable pset this morning as well as study for the midterm exam tomorrow. Also, the pset and exam somehow cover different material. And I have a research paper on immigration reform due this weekend that I should probably start.

But however scary that may sound, this is not a post about how stressed I am, or how much work MIT is, or how to handle it, because I honestly haven’t figured that out yet. While those things are all certainly true, it doesn’t represent all of life here – psets are hard, but they aren’t (always) all-consuming. So instead of ranting about line integrals, this post is about having fun and not taking life too seriously.

Conner 3, my floor, seems to like movies. It’s how we relax. Our floor lounge is home to four couches, two giant bean bags, and an enormous projector that always seems to have something playing, whether Dr. Who, Inception, or Pitch Perfect. Sometimes we’ll binge on romantic comedies, and other times we’ll just splurge on action. It was raining last Saturday, so we decided to marathon the Lord of the Rings films (extended edition, of course). Our movie addiction has gotten so out of hand that someone graphed our consumption over a month: they found that a net positive increase in movies per week that probably won’t flatten out any time soon. 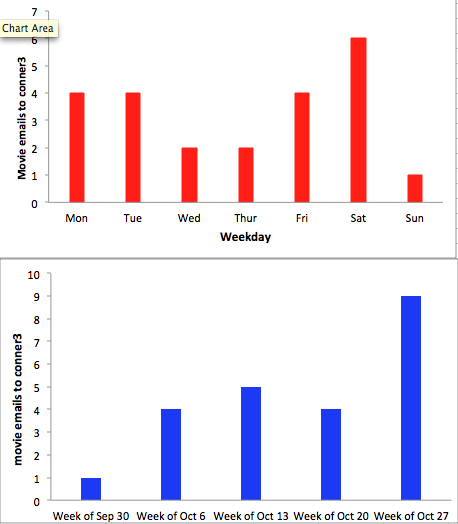 I’m also fairly confident that we’ve averaged about two per day since October 27, so maybe I’ll do some data mining and see if I can find updated numbers.

Now, anyone who likes movies should be aware that Interstellar opens this weekend. I’m a huge fan of Christopher Nolan’s films – Inception is my favorite of all time – and I’ve been eagerly awaiting its arrival for months. I wanted the earliest possible showing, and it just so happened that the AMC in Boston was screening Interstellar a couple of times on Wednesday, two whole days before the official premier. A group of my friends even made plans to attend.

Hang on. I paused. Christopher Nolan makes a new movie every two years at best. 18.02 psets come out every week.

Minutes later, I bought a ticket and spent the most exhilarating $14.14 of my life. I have yet to regret that decision. The movie was incredible: a breathtaking, inspiring roller coaster of twists, turns, loops, and drops. The popcorn was perfect, the Coca-Cola Icee was classic, and, most importantly, I escaped the infamous “MIT Bubble” that I had slaved under for the last month. Under the MIT Bubble, the innoccent little utility marker arrows spraypainted on pavement had become force vectors and free-body diagrams. I had caught myself gushing sob stories to my friends about how much work I had. Hearing the phrase “I’m six-one” began to mean Electrical Engineering, not a measure of height. The MIT Bubble is a pressure cooker, in all the best and worst ways simultaneously. But after escaping the Bubble, even just a few minutes into Boston, 18.02 seemed as distant as the stars in the sky, accessible only by Matthew McConaughey via wormhole that suddenly-

Don’t worry, I won’t spoil it. In all respects, it is a beautiful film, even if the physics does get artistically bent on occasion. Interstellar was easily the highlight of the week and was absolutely worth the time. It took me until 5:37 AM to finish 18.02, much longer than usual, and I could tell I wasn’t quite as focused as I could be, but the work still got done and I walked away with a sense of satisfaction that neither Interstellar nor a successful pset could cause on its own.

I feel like it’s very easy to lose perspective here. It’s easy to get caught up in the immediacy of the next exam or the seeming all-importance of the looming essay, but sometimes taking a break, refreshing your mind, and suspending disbelief to experience a cinema masterpiece has more net benefit in the long run. At least in this case, the adventure was well worth the sleep cost.