I went to the Undergraduate Women in Physics Conference at Yale. And I'm blogging about it.

I’ve missed mystery hunt every year so far. Freshman year I found myself sick and just laid in bed the first two days of the hunt, feeling moldy. By Sunday I’d had been well enough to visit first east’s team headquarters in building 12. I left after 5 minutes and returned with a can of Oust air sanitizer and a pack of Pringles chips. I worked on some puzzle involving braille until I felt like lying down some more. Sophomore year was simpler. I was in China visiting relatives all IAP. That would be my last visit as a Chinese citizen. This year, I spent the weekend at the Conference for Undergraduate Women in Physics at Yale (CUWPY). So, instead of talking about Mystery Hunt, I’ll talk about that.

If I can help it I try not to walk around New Haven with an expensive camera slinging from my shoulders. I left it in my dorm room while I was away. I figured I’ll just borrow my parents’ point-and-shoot for the weekend while I’m in the area. It turns out that using a new camera, for me, was a little like being fitted with a new pair of arms. The flash went off constantly and I found myself apologizing every few seconds and more to myself than anyone else.

In the pictures that follow, I’ve forsaken the higher resolution links (for the most part) as those are pretty unpleasant to look at. A lot of color adjustment makes for crappy close-ups, and the white balance of the camera was all whack.

I’d lived in the shadow of Yale University for 7 years before going up to Boston for college but this was my first time there as a tourist. The difference being it was vastly more fun.

The conference was well organized, and reimbursements provided for travel and hotel accommodations. Friday evening a group of about 10 of us from MIT caught the 6:45pm Amtrack Regional to Washington D.C. and arrived in New Haven about 9:10. Three taxis took us to the Courtyard Marriot on Whalley Avenue. 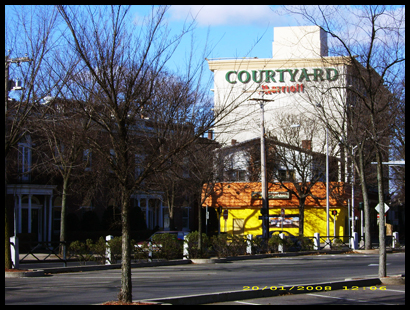 After settling down in our hotel rooms we went out for some ice cream and stopped on our way back at a party going on in some suite in Branford College (a residential college of Yale). The place was very 18th-century, carved stone passageways and wrought iron gates. The party was mediocre and we retired to our rooms.

We were each granted a double room which we then shared with a roommate. Two big beds, two people. I, too, had a roommate but she did not show up for the conference. I had neighbors on the same floor. 419 to my 421. And quickly we discovered that our rooms were connected by a set of inconspicuous doors and soon we had a pretty hoppin’ one-floor multiroom complex. A regular women in physics party pad. We used all this space to watch TV vigorously and type on our computers. 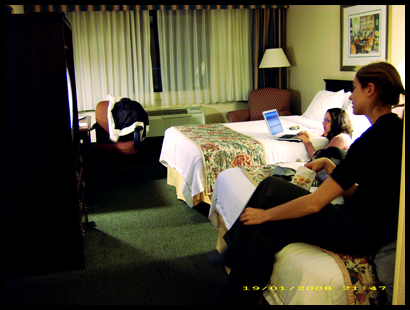 Watching TV in my hotel room. 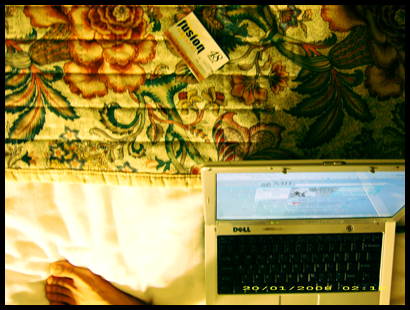 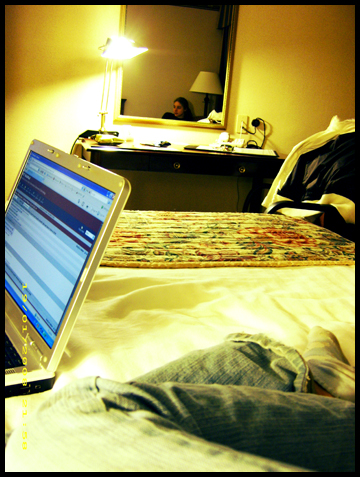 Lectures on the first day included a talk about protein folding in the interdisciplinary area of BioPhysics and why you should not to enter grad school in an interdisciplinary area such as BioPhysics. At least if you’re not prepared to deal with being an orphan of sorts. Howard Georgi from Harvard came to discuss a certain Larry Summers Syndrome, and the future of the Harvard Science and Engineering departments after Larry’s retirement. He argued for a multidimensional “aptitude scale”, where good scientists lie at the extreme of two or more independent axes and criticized the one-dimensional fixation on IQ.

At lunch, we met with Yale faculty members in physics and discussed, among other topics, the need for positive academic role models with whom children of all races and genders could identify. I met physics majors from NYU, Sarah Lawrence, Yale, Connecticut College at my table. A careers panel in the afternoon offered professional options for women physics undergraduates, advice for grad schools, and, of course, addressed the family vs. career concern. “How many, if you had to choose, would choose family over a career in physics?” Maybe 25-30 out of the 100 girls in the hall raised their hands. “How many would choose their career?” Slightly more. “How many can’t decide?” A whole lot. If you’re wondering I raised my hand pretty quickly for the first option. A really demanding career with no family to come home to seems like a surefire way to get yourself deeply depressed. “But how about both?” Conclusions? Sure, with a supportive husband. Success stories were told. It’s possible, we’re told.

The lectures were held in the Linsly-Chittenden Hall on Yale’s Old Campus, in Room 101. Lunch and dinner were held in different locations depending on what the schedule permitted. Here are some pictures I took this weekend of the dismally cold Yale Campus.

Old Campus where the conference was held: 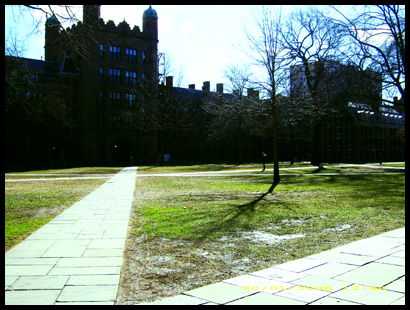 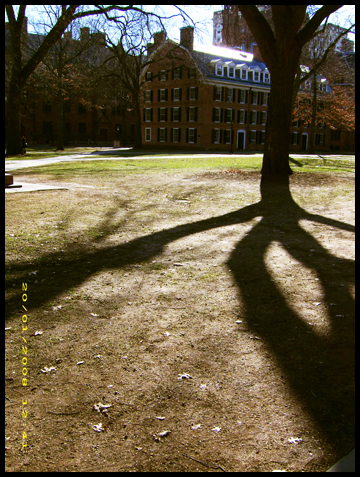 Freshman dorm in the background. 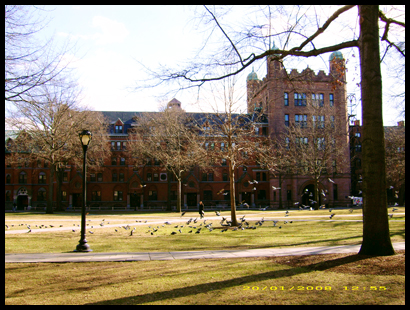 And the inside of Linsly-Chittenden Hall: 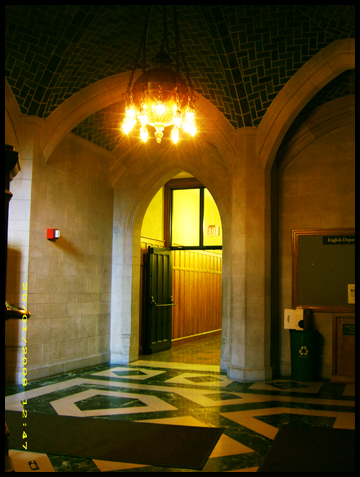 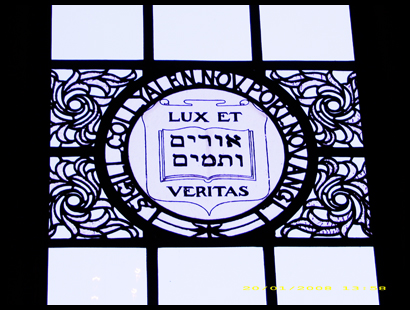 Yale is very proud of its seal. It was on absolutely everything we touched this weekend. 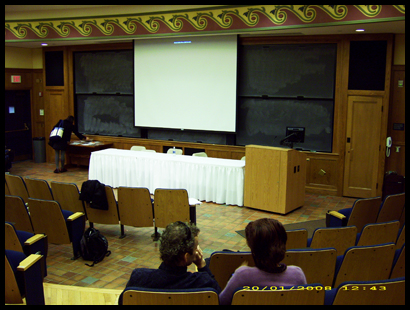 Lecture Room 101 where we spent most of our time. 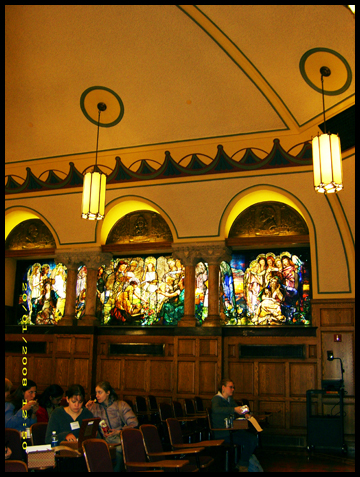 Another room where we sometimes had lunch.

Our conference days began promptly at 8:45am. Bagels and pastries and coffee and tea were among the complimentary breakfast items (served on napkins, cups, plates, all emblazoned with the yale crest). Now, I’m no morning person and IAP is no time of year for morning people. Here’s the big cup of coffee I made myself each morning in the hotel room: 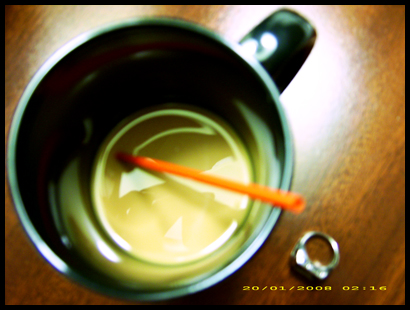 That’s my MIT class ring on the side. Which I found at home where I went for dinner Saturday night. I thought I’d lost it; my mom found it in my little baby blue room. This isn’t the good one anyways. But I guess that’s why I wear this one around and not the gold.

I took some time off in the middle of the day to go shopping on Broadway. New Haven is very much a college town- Broadway and the area around the New Haven Green are not only the best, most downtown parts of New Haven, but are also central to the Yale campus. Walking up Elm Street several blocks from Old Campus there are shops (Yale Bookstore, J.Crew, Urban Outfitters, Thom Brown…) and eateries (Au Bon Pain, Asian Noodles place, Burger joint– called the Educated Burger, ha, and Starbucks, if it counts.). I grabbed some soup at ABP, tried on some Yale class rings at the Bookstore (“Oh, the design is the same for every year?”, “Hm, well I’ll have to think about it.”), got a nosebleed while reading a book on a puffy couch in Urban Outfitters, bought a little stuffed roommate for myself at the Yale Gift Store (the first Yale paraphernalia that I own).

Here he is getting ready for bed: 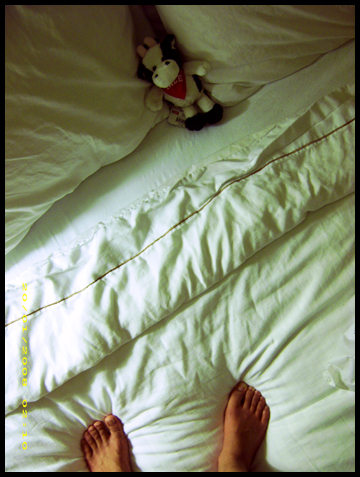 Here he is in the morning all excited for another great conference day: 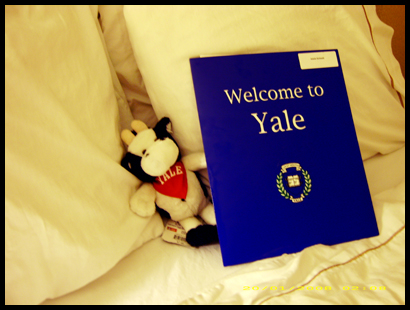 Broadway Avenue and its stores (our hotel was right off Broadway): 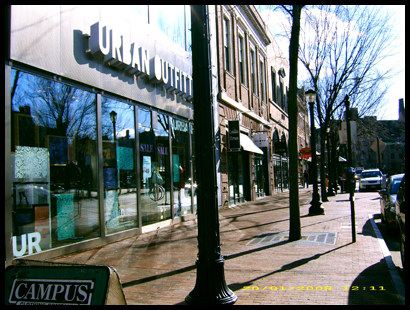 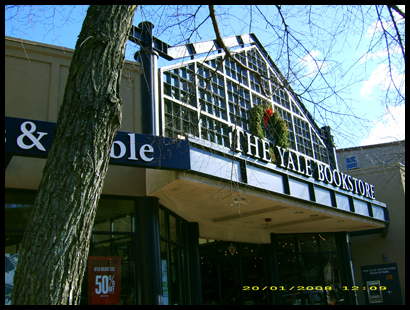 A little further down we get into the Residential Colleges. I sometimes try to envision seeing Yale the same way that I see MIT, the way Yale students must see Yale. I try to imagine coming home to Saybrook College after a long day in the Quad like I do to East Campus. I can’t do it. I think I’ve been going with my mom to the biology labs for too long. 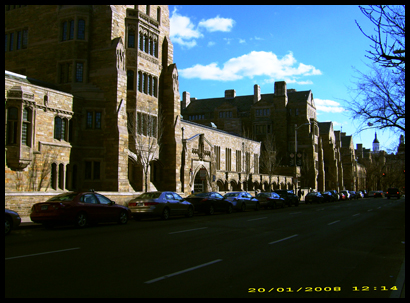 I think this was Trumbull College.

Saturday night, getting back to the hotel room after chilling with my parents for a few hours (my dad had encouraged me to stay at the hotel, “meet people”), we spent a few hours more or less deciding on what movie to see and finally went to the Cinema on Temple Street.

Sunday was windy like a hurricane and frigid as hell, too, as a cold front swept over New Haven. This was the day of lab tours. And we marched, like soldiers to a war, heads bowed to the wind, determinedly, dutifully, to Yale’s Physics and Chemistry laboratories on the infamous Science Hill. It felt like more walking outside than I’d done in 3 years. Don’t ever let anyone tell you that Science Hill isn’t far. Back when I was applying to colleges Yale buttered me up and insisted “Science Hill isn’t that far it’s totally on campus”, and I believed them. Well, we walked for half an hour each way. Even when we finally got to this “Science Hill”, it was this sprawling campus of all these similar-looking but disconnected buildings and to go from one to another we had to walk around buildings and through lots, all while my face froze and fell off my head.

Their facilities were quite impressive, but the number of resulting pictures on my camera is limited as I didn’t quite get my motor functions back until I was on the train ride home.

Here’s their (huuuge) central library that we passed (along with most of New Haven) on our way to Science Hill: 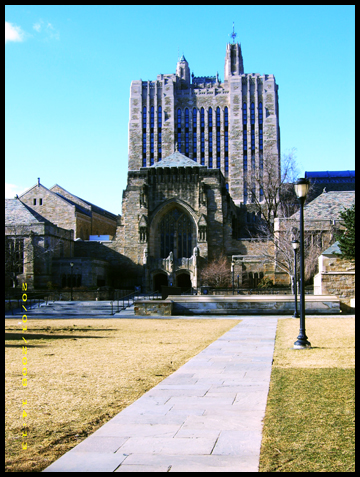 By contrast, MIT has 13 (?) separate libraries scattered all around campus, the largest of which maybe measures up to 1/5 of this one. 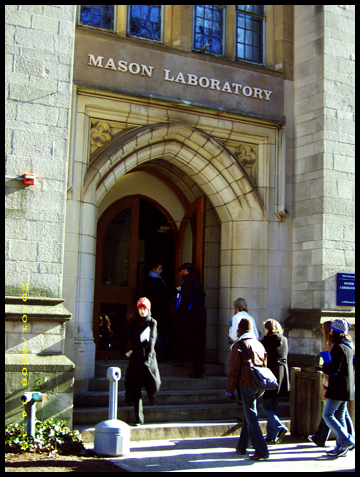 One of the first labs, I think. I don’t remember much I was so cold. 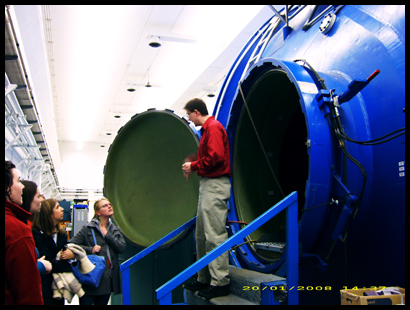 Yale’s particle accelerator. It’s very impressive, and takes up quite a few large rooms. The physicist giving the tour was under the impression that it was the largest accelerator owned by any college in the country. I was pretty sure that accelerator was at Stanford, but I did not bring that up. As souvenirs we each got a couple frames of negatives from a bubble chamber experiment. Bubble chambers use superheated liquid and tiny trails of bubbles to detect the existence and path of very small things inside the chamber, and are particularly useful in particle physics experiments in which a whole host of particles are created.

At some point, there was a poster presentation by those who wanted to bring a poster of their research and present it. I went to see this and stayed a while, but I passed on the opportunity myself. 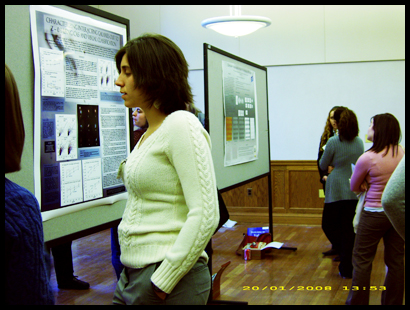 The train back was delayed by 25 minutes and we got home around 10pm sunday. Looks like it’s back to IAP as usual for me, I can’t say I didn’t appreciate the break from break though. There are tons of opportunities like this around campus, to connect with other institutions, their faculty, their students– if you’re interested in this sort of thing, just keep your eyes open, and get on some mailing lists. :)

Til next time,
lulu

23 responses to “A Break from Break”