Laura and I have the same birthday.

What’s the probability of that, given that there are 12 MITbloggers and assuming no leap years?

Sorry for the lack of meaningful updates recently; my life has been tremendously busy… and classes haven’t even started yet. In the past three days, I’ve run fifteen miles and walked about ten, so I’m just a little bit burned out from that. Sunday, my friend Jacob from high school came down from Dartmouth on the bus to visit and I gave him the grand walking tour of Boston and MIT, though I did forget the acoustic benches this time. Among other things, we went into the MIT Museum 20 minutes before closing, which was worth it just for the holograms and strobe photography exhibit. I also took him past the original location of MIT of Newbury Street, but I forgot where it was entirely. Next time, I’ll get a picture and blog it. I also worked another four hours of desk last night, the money from which I can probably use to buy a comfortable chair for my room from the online retailer of my choice.

In other news, Mitra recently acquired a free iPod shuffle, and since she already owns an iPod, she decided to bestow it upon me as a gift. Thanks, Mitra! I’m not entirely sure I like the idea of iPods–I think that they can cut you off from the outside world too much, which is bad when a friend wants to say “hello” or if a heavy object is about to fall upon your head. Still, I’ve always admired iPod Shuffles; it’s a brilliant marketing technique when you can remove basic functionality from an existing product (in this case, the ability to control your playlist) and then justify it with a tagline (“Life is Random”) and create awesome, aesthetically-pleasing advertisements with funky silhouettes. Go Apple.

Anyway, I’d been debating about buying an iPod Shuffle for a while just so I’d have something to keep myself occupied with when I went running. I have to say, I had fewer deep thoughts than I usually do when I run, but I did end up running a lot faster. I was at about the 20-Smoot mark on the Harvard Bridge and I was getting pretty tired when the “we-oh-oh, we-oh-oh” part at the end of “Every Little Thing She Does is Magic” kicked in, and I was just instantly rejuvenated. I ran the fastest five miles I have ever run, which was still slower than most members of the cross-country team can power-walk, but notable for me.

DID YOU KNOW? The Google calculator recognizes Smoots as a measure of distance? See? 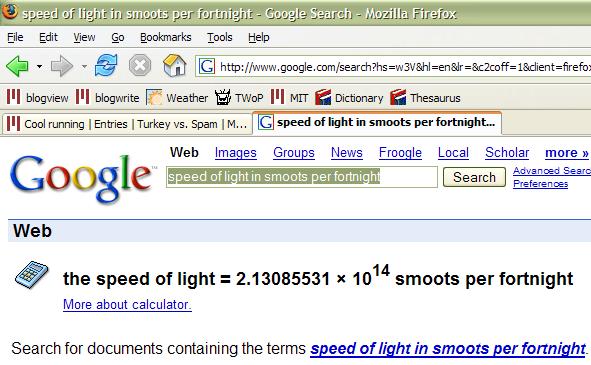 It’s actually really easy to go jogging as an MIT student; most people just run along Memorial Drive, which goes right along the wide edge of campus, cross a bridge, and run back along the mostly-lovely, often-tree-lined Esplanade. There are easy “bridge loops” covering a wide range of mileage, so it’s not too hard to get out and jog even if you were fat and lazy all through high school like I was. You can check out the Boston running map here, or go and do a search here if you want the extra few significant figures. MIT is close to the Harvard, BU, and Longfellow bridges.

Here’s a representative sample of my iPod jogging playlist, though not a simple random sample. 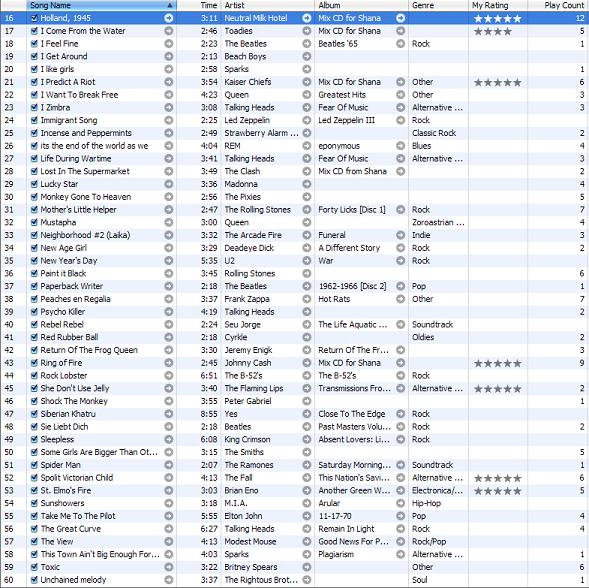 My goal is to never skip a song.

Alright, I better get some sleep now; tomorrow is registration day and I have to meet with my advisor at 9:30 AM, but not before getting the turkey reactor up and running. I also have to train to manage my floor’s money as floor chair and perhaps, just perhaps, take a trip to the Garment District.