For the final art blog of the school year, I’d like to tell you a little more about Cracked. Cracked is a student-run art group that focuses on providing an open forum for artists and thinkers alike. It is a conglomerate of undergraduates and graduate students from MIT and Wellesley, as well as faculty from the Center for Advanced Visual Studies (CAVS, cavs.mit.edu) and local artists. The open forum we have created is part art-support group, part studio, part community, and part activist.

We called our first meeting “Bring it to the Table.” We had been given a Director’s Grant from the Council of the Arts, as well as space in CAVS to meet, and we arrived early in order to prepare the scene. The table, first of all, had to be made. We used a roll of painters tape to build a flat-three-dimensional table in the middle of the room (note the lower right-hand corner). 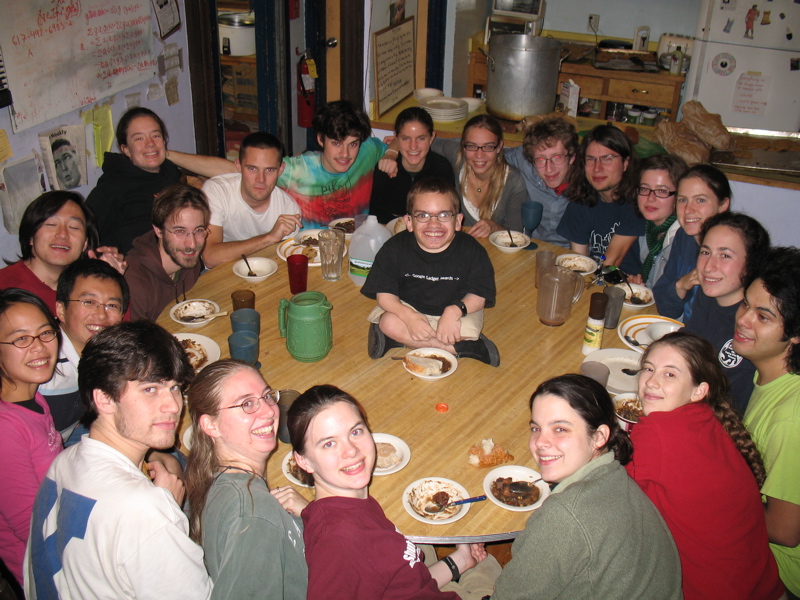 About twenty-five Cracked members showed up to bring to the table both their ideas for what Cracked could be and their favorite food. We had a wonderful discussion and potluck dinner, and emerged with a semblance of a mission statement and a lot of excitement.

Cracked was to become a space, a conversation, a collaborative performance group, a sponsor of small projects, and an open studio for all of its members. And it has become so. Since that meeting we have been given an actual office in CAVS where we host “office hours” (open studio time!) several times a week. We have been lucky enough to perform and collaborate with several of CAVS’s visiting artists. The first collaboration was with visiting professor John Bell. He is one of the original bread-and-puppeteers (http://www.breadandpuppet.org). John Bell hosted the HONK! Fest in Cambridge, a parade to reclaim the streets for horns, bikes and feet. Cracked decided to promote clean streets and recycling by creating a giant dustpan float (out of bicycle boxes to keep the theme) and dress up as trash and street sweepers.

At the parade Cracked was sandwiched between a brass band from Italy dressed all in pink, and a brass band from New York City called Lesser Panda, with whom we would perform at CAVS later in the term, although we didn’t know that yet. We swept the streets for two hours, dancing from Davis Square in Somerville to Harvard Square in Cambridge.

As I mentioned in my last blog (Seamless), Cracked was asked to throw the CAVS Giant Art Party. As the second semester got underway, we got to work creating giant paintings in giant frames, buying giant food, baking a giant cake, and building a giant replica of Marcel Duchamp’s “Fountain” in which we served drinks.

Lesser Panda and New York-based street performer Jenny Romaine were later asked to give a talk at CAVS. Traditionally, all visiting artists get a tour of MIT by CAVS staff, however Cracked gave the tour this time. But because the standard tour is relatively dull, we decided to spice it up. Jenny Romaine and two members of Lesser Panda got a fitness tour of campus, starting at CAVS and ending at Lobby 7. We had a personal trainer and six Cracked runners helping them and joining in along the way. The artists got the learn about the real traditions of running on our lunch breaks, running three laps around Killian upon Commencement, the water stations where students are egged on to keep working out, and the sporadic chants of “Fitness!” of “Shoelace Check!” All in all we found the tour to be very informative and enjoyable. When we reached the Media Lab, we ran a final lap around the Lifelong Kindergarten Group before collapsing on the ground. So tired we could die, we did die, and with a bit of speedy costume change, woke up as zombies complete with blood stains and bad makeup. We proceeded to walk slowly and eerily back through campus, grabbing at passersby and calling out for “braiiinnnnsssss!” Photographer Eric Schmiedl caught us as we reached the end of the tour, and we landed the front page of the next issue of the Tech.

The lecture that night was in the form of a performance, in which Cracked members dressed up as different “street” stereotypes to recreate the street performance scene. At the end of the performance, we were all ready with a room-full of cream pies to throw at each other. The band played as we ran around and slipped on cool whip, pieing each other in the face for the remainder of the show.

Cracked has begun to host monthly workshops taught by members. We had a writing workshop in which we generated five individual projects involving words and one medium, for example, paper, a computer, a video camera, or each other. Our second workshop was called “Quick-and-Dirty Pops,” a pop-up book workshop. We plan to continue these in the fall, and are open to suggestions!

Also in the fall will be our first exhibition at the Wiesner Student Art Gallery. Keep your eyes peeled for announcements on the show, and until then, have a fabulous summer!

E-mail cracked-request [at] mit [dot] edu for more information, or the be added to the list.